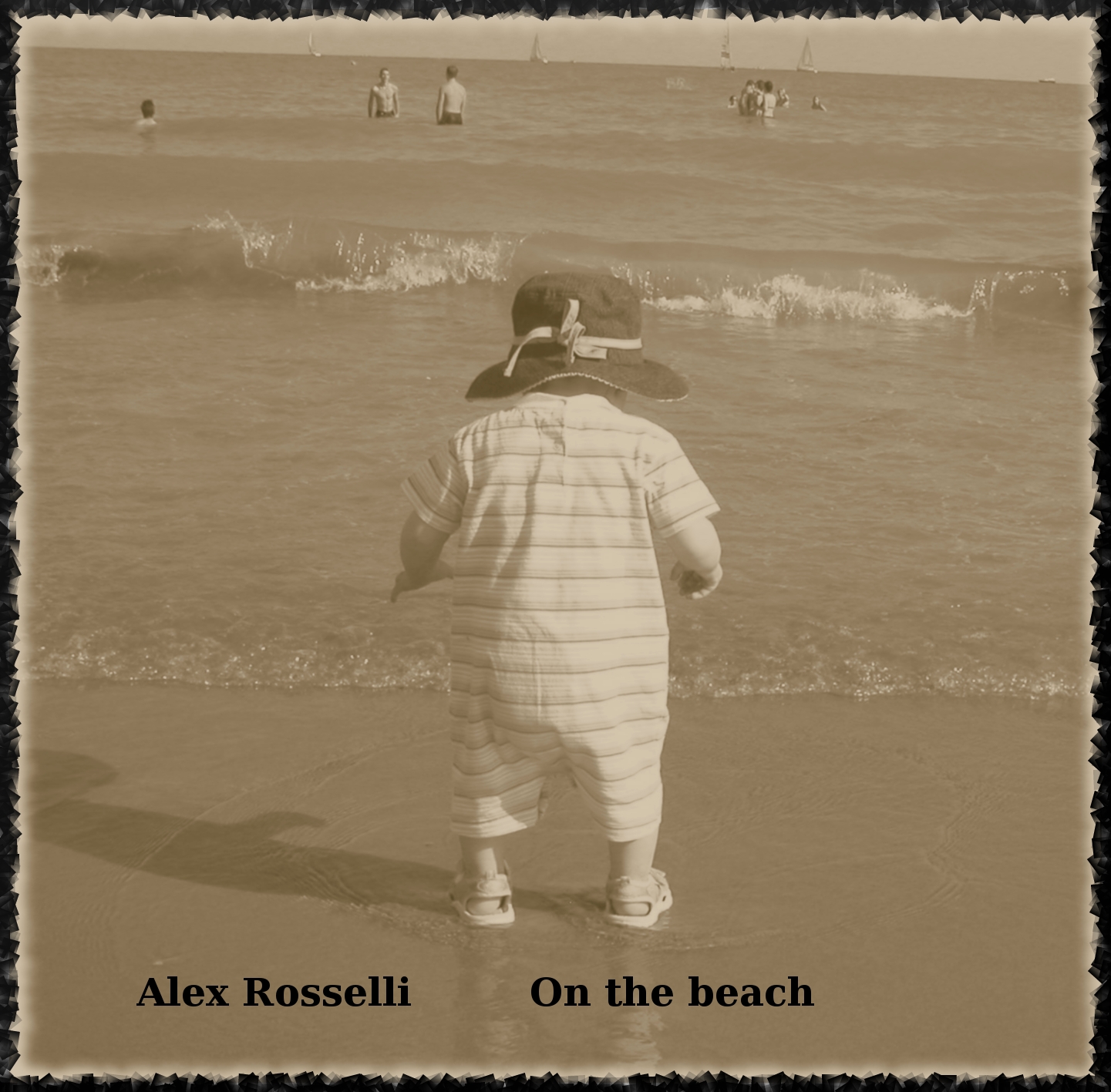 Interesting creations from Alex Rosselli…he’s recently jumped-aboard the experimental/soundscape train and heading off into all kinds of new atmospheres and discovering new musical terrain. At the end of the day, the music Alex is making incorporates a strong vibe of fusion, free-jazz progressions and the signature guitar-style & sound that he’s been refining & perfecting for years. While this is somewhat unexplored territory for Alex as far as recording goes…the man himself has been a musician for years and certainly knows which direction he wants to take his music in now…but how far will he go with it?

“Sleepy Noon” starts the EP out with a burst of bright static and sends the music straight out into the atmosphere immediately as the pulsing-electro starts its staccato-style melody. Excellent tones bending from the guitar…very David Gilmour-esque in their sound – while “Sleepy Noon” starts this record off with a slow-drip of energy as the title suggests it might, it’s not a sound I’d turn off. As to whether or not there are enough hooks to pull people in…it has always been a tough genre to judge for that…some people dig the minimalism, the clarity/precision of sound being the dominant aspect of what they’re listening to…others need a little more to keep their attention. So there’s a little risk with starting out On The Beach with this one…as much as I might dig it, I can hear that people might struggle to stay with this first idea on display. The ambient/electro crowd though…you guys will love the beginning to this EP.

As the guitar eventually comes tripping-out into “Fatal” – it almost makes you wonder what led to “Sleepy Noon” as the opening track. Especially when you consider the fact that I might be looking at numbers and titles of songs…but the ID3-tags on the MP3s themselves actually indicate there were a LOT more songs recorded…so it would seem as if Alex might have potentially created a ton of options that could have landed upon this EP, or started it out. To me…though the guitars are as ‘free’ as they get, not adhering to any particular part or certain-structure; it might be loose in its ideas, feel and performance – but to my ears, there’s more to pull people in with right away on “Fatal.” It’s a sweet mix of guitar-chords in chorus-effect heaven and electro-elements all swirled into madness…but I went with this one pretty easily…it’s like musical-poetry…free-verse, of course.

After a bizarre intro that breaks into a solid beat & guitar-rhythm…Alex’s fusion-efforts become a little more-clear in the mix of “Bouncing.” With its clever combination of funk, rock, jazz and more worldly-rhythms…Alex puts forth a strong effort on this third-tune, the longest of the six-songs on the EP. I mean…there is ZERO doubt about the man’s abilities as a guitarist, that’s for certain; have a listen from the second-minute and into the third of “Bouncing” and you’ll hear the charisma this guy can get from his guitar-solos. Later on in the song, heading towards the fourth-minute, Alex will light it all up once more with some truly amazing solo-work, this time in a more muted-style with a different sound that brings extra-versatility to Rosselli’s most accessible rhythm & groove upon On The Beach so far.

If anything…opening this record with “Sleepy Noon,” and into “Fatal” followed by “Bouncing” has shown the ideas and energy of the album rise-up continually in a pretty rad progression of sound overall really…so maybe I should be giving that opening-tune a little more credit than I initially did. There is a lot of functionality in music like this…and truly, the opening tune DOES serve an important purpose. Just like many of the songs as well…like “Cold” – which is definitely one of my favourites…but take that song for example, the way it starts, to what it becomes and how it ends; if Rosselli’s goal is to create fusion…he’s finding some smart & striking ways to achieve it with unique ideas blending into solid-rhythms and absolutely standout instrumentation once again. “Cold” was a solid tune that really finds its way into a rad groove quickly…many thanks to the low-end rumble of the bass filling in the space surrounding the guitar-parts with a thick, full sound.

It also allows the title-track from Rosselli’s EP, “On The Beach” to shine a little brighter. But let me just tell you folks…this song hands-down, contains probably one of the TOP FIVE guitar-solos I’ve ever heard in my LIFE for what I personally like to hear. Alex plays this one real-sly…real-slick too…you’ll never see the most incredible switch in this song coming until it’s right upon you. “On The Beach” starts out gently…very pleasant, very inviting…so much to the point where you might even chuckle at the insinuation that it could become anything like the snarling beast of mammoth-guitars that it becomes by the end. Honestly…this was a ‘brown-pants’ moment for me – you know the one; where you’re completely relieved that you were wearing them when you just hear music so incredible you shit yourself a little. “On The Beach” was like that for me – and let me be ridiculously specific…because I don’t want any confusion here…3:23+ and all the way to this song’s ending…the guitars are far beyond-spectacular and have shifted into sounding completely awe-inspiring.

And as my suspicions started halfway through listening to the record and deciding the function of the opening song “Sleepy Noon” was an important one that served a purpose…I felt like that assumption was confirmed by “Breeze” ending the EP in a similar fashion to where it all began. Bringing it all full-circle…it’s actually a complete-trip to look up from writing this to realize I must have listened to this over a dozen times and never once wanted it to end. You might not be able to sing-along to it, you might not be able to make it make sense to your grandparents…but if you’re anything like me, you’ll find the purpose for music like this in your own life. With its bold, clear, minimalist approach, feel and attitude, it’s as if each and every sound was amplified times-ten in how we take it all in, and how we hear it. On The Beach makes for a fantastic voyage into atmosphere & experimentalism and shows the artistic-nature of a true artist/audiophile like Rosselli and his endless enthusiasm for exploration in sound.

Find out more about Alex Rosselli at his official page here: http://www.alex-rosselli.com/