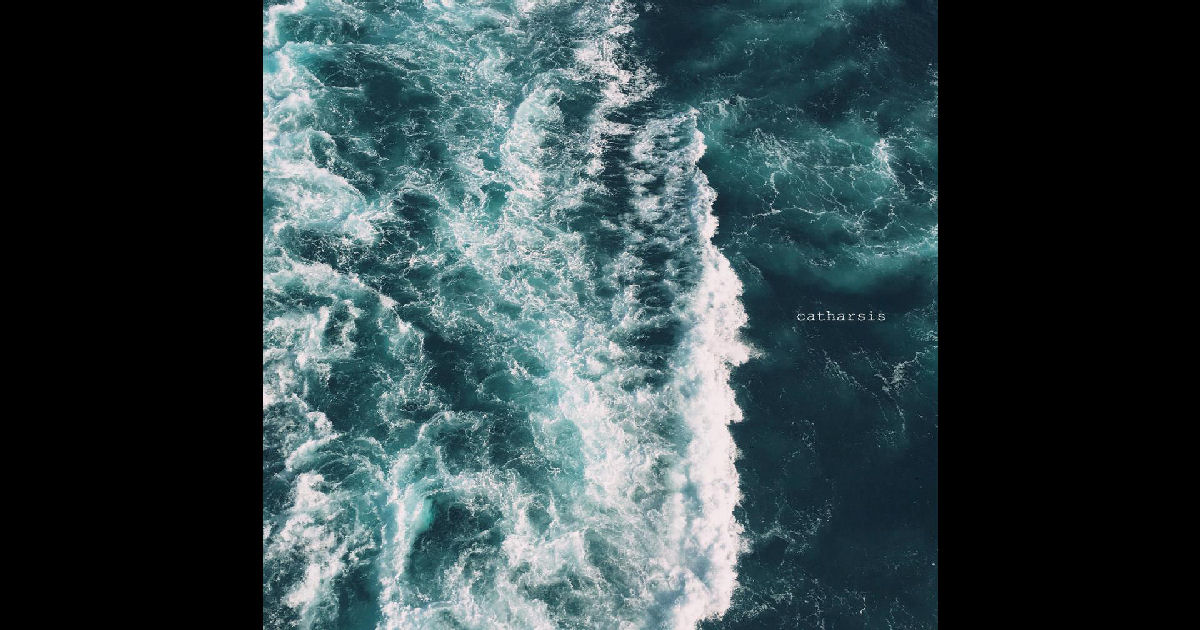 You gotta dig this guy.  You just gotta.  It’s like an unwritten rule.

Aidan is back up on our pages already for the second time this year – and there’s already one extremely noticeable change before you even push play; he’s dropped his last name for this next chapter of his career.  Aidan’s a young dude still…chances are, like many of us out there, he’ll bounce between a few more monikers as he continues on throughout the years…you might remember him as aidankoop as one-word…I’ve seen that out there, I’ve also seen it divided as Aidan Koop…and now here we are, he’s going the Oprah route.  As much as I’d always be inclined to advise caution when it comes to changing something so crucial as the name we search when building a following & fan-base, I can recognize it as a natural phase in the evolution of an artist as they find their way to the sound they’re ultimately seeking.

So…Aidan it is!  Or…at least it is for now…  Let’s dig into this new record he’s got, called Catharsis – we’re still ahead of the game on this one, Aidan’s new EP comes out officially on March 31st this year.

If you haven’t checked out his music from our past reviews on his EPs or previous album Quiet Spaces – make sure you do that…there are multiple reasons on all those records as to why this ambient artist is continually grabbing our attention and on the frontlines of the future of the genre itself.  Aidan puts his whole heart, soul, and emotions, into everything he does…and while it’s always without vocals, the instrumentals he creates are powerful enough to communicate his thoughts and feelings perfectly as words ever could.  No exception to the high standards he’s set – the Catharsis EP once again delivers stunningly unique music that is meant to help soothe the soul and ease the mind…for times where you need it most, to just relax, think, sort out your thoughts and drift away into peaceful, dreamy sounds.

As far as I’ve read, Aidan is once again going about all this in mainly one take, with effects & pedals assisting the ethereal sound he creates.  “Sleepy Eyes” starts out the new record with that feeling of drifting off & away into your thoughts, right before you’d call it a night for the evening and comfortably sleeping until the next morning comes.  Just past the second-minute, the sounds break into shards & fragments like ice or glass would inside of the crystalline sound he’s created on “Sleepy Eyes” – it moves slowly like a glacier and every bit as majestically.  I love the way he’s got it mixed and how distant the sounds is, yet how close it feels to your emotions, thoughts, and feelings.  “Sleepy Eyes” starts the entire experience on a gentle cushion that gives your mind plenty of room to adjust to Aidan’s ambient style and enter into his world of sound.  Artists like Aidan truly make music strong enough to pull you out of your daily grind and allow you to slide away into something much more beautiful – tunes like “Sleepy Eyes” are about as far removed from the corporate world or the synthetic aspects of music…it’s like tapping directly into his dreams.

“So Why Am I Even Writing This?”  Good question!  Ambient/Instrumental tunes are often the toughest to describe and even though I love what Aidan does…still doesn’t ever make it easy!  I suppose though, that it’s him asking the question, not me; “So Why Am I Even Writing This?” is certainly one of my favorites of the new set on Catharsis…it’s gentle, mild, inviting, and truly beautiful.  Very hypnotic and chilled-out, Aidan excels while keeping everything low-key…and when those solo-notes of the guitar ring out, you hear each moment move right into your ears like it’s all attempting to take a permanent residence in your mind.  Definitely wouldn’t be a bad thing whatsoever – “So Why Am I Even Writing This?” is incredibly relaxing…like a hot-stone massage for the mind.  I always feel so refreshed after listening to Aidan’s music.  Even though I’d consider a lot of the tones and choices in sound/style he makes to echo sad or melancholy feelings a lot of the time as I listen…I suppose I’m one of those people that finds beauty in sadness as well.  Wouldn’t you know it – a ton of that is addressed in the next song.

It’s definitely not like I’ll ever recognize every sample or speech in all the songs, albums, artists & bands I review…I have no expectation of that whatsoever.  It’s always fun to hear something you’re familiar with or can identify – but in my opinion, so much more rewarding when you have no idea who’s making the noise you hear or speaking, like you’ll hear on “Illness.”  The music on this tune is insanely haunting…I mean…it COULD have a lot to do with the chilling vocal sample…which…speaks…hmmm…some truths that hit way too close to home for me personally.  Don’t get me wrong, it’s the exact reason I absolutely LOVED this song, but it contains within, a lot of devastating points that make a ton of sense about how we tend to sometimes glorify feeling bad.  Coming from the school of Kurt Cobain, who is referenced at multiple points throughout the speech, this was especially tough to listen to because it’s so damn accurate.  If anyone made misery & personal suffering somehow become awesome, relatable & enticing as a lifestyle or mindset, it was certainly Kurt.  “Illness” speaks specifically on the topic of music’s relationship with our emotions and what an incredible outlet/release it can be to get past mental issues of all kinds from depression to anxiety & more.  I hear the words on “Illness” and I WANT to rebel against them…because that’s what Kurt would have likely done…but if I’m being truthful, the words that run through this song are all-too-realistic and entirely accurate.  It makes a large case for the therapeutic nature of music…aka, Catharsis.  To get right into the narrative that runs deep through “Illness” is to understand the ultimate statement piece on this record that defines its underlying themes.  As much as I loved “So Why Am I Even Writing This?” – I wouldn’t lie to ya, “Illness” takes this record to a whole other level…the texture and atmosphere of the music echoes the thought-provoking stream of thoughts coming through the vocal sample perfectly…it’s compelling, it’s captivating – it is ART.  Incredible tune.

Again, important to remember, Aidan does most of what he does in one take.  It’s an approach that of course comes with added risk, but where there’s risk, there’s reward.  I know him well enough to know that the uniqueness of these moments…these musical-expressions he makes…there’s an added value to him personally in creating a song that would be theoretically impossible to duplicate.  You might be able to figure out the combination of sounds he uses on the two-part miniseries of “Weightless P.1” and “Weightless P.2” – but you can’t possibly recreate the actual moment itself in how Aidan puts his own emotions into his material.  I could go on and on about his immaculate choices in tones, or how much of a master’s grip he’s got on the ambient genre…but really, that’s what it comes down to – he puts so much of his genuine self into the material that he always becomes the real strength in what we hear.  There’s no ‘stronger’ half, no weaker half either…”Weightless P.1” uses fantastic additional ambient sounds, almost as a percussion of sorts at brief moments.  The palpable weight of this song’s emotion flows in & out gorgeously, fluid like water.  Aidan innovates the depths of sound by modulating the pulse after the fourth minute, getting into the effects surrounding the warm glow in the stunning atmosphere.  After a brief pause of silence, “Weightless P.2” continues the journey forward, offering a new direction in the sound & style with the same incredible results.  It noticeably brightens up in the second half in a way that complements its counterpart, once again bringing in really smart additions of ambient sounds into the background that you can hear…sometimes just the smallest sounds can add so much to a song like “Weightless P.1” or “Weightless P.2” – and I think he’s really tapped into just how effective these subtle moments and gentle additions can be in making the experience memorable, and real.

And wouldn’t you know it, not-so-hidden at the end of the record, Aidan’s branched-out even further here, adding vocals to the final cut, a second version of “Sleepy Eyes.”  While there’s no doubt that vocals would be the last addition that Aidan would make to his music if he were to use them, he’s obviously put a lot of thought into how he’d approach the opportunity.  As a result, you don’t have him coming off the top ropes and trying to be some opera hero or rock singer all of a sudden – you once again get his personality offered in earnest through a humble, low-key and nearly spoken-word style.  I felt like this worked really well…like…if you can envision whatever the ambient-version of a track with vocals would sound like, this really hits the mark.  Last thing I’d ever want to do is recommend that Aidan changes his instrumental/ambient ways to constantly include vocals on the regular – because I truly love what he does already and think it speaks strongly enough on its own at all times…but somewhat surprisingly, largely due to the incredible mix he’s got on them – I really thought his vocals fit “Sleepy Eyes” really well.  It’s an adjustment for sure, in the sense that you get accustomed to not hearing vocals over the course of the five previous tunes on Catharsis…but a welcome adjustment.  I’d definitely encourage him to continue to explore the ideas he’s venturing into here…because there can be truly fantastic results awaiting him in areas he’s yet to fully tap into.  Like other ambient artists like say, The Album Leaf, the addition of vocals can be introduced in multiple ways with varying results – but the sheer addition of another tool in your arsenal will always lead to new opportunities and ways to reach out through the writing & music.  At the end of the Catharsis EP – it might just be a glimpse of what’s to come in the future of Aidan’s music…we’ll have to wait & see on that.

But if I know this artist as well as I feel like I do, I think it’s safe to say he won’t keep you waiting long on the answer.  Aidan has proved he’s as creative, thoughtful, and attentive to the details & nuances required to make ambient sound stand out as he’s ever been – and I think he’s added yet another stunning chapter to the growing story of his own expressive & emotional evolution in life & in his music.

Find out more music from Aidan at his official page at Bandcamp:  https://aidankoop.bandcamp.com/