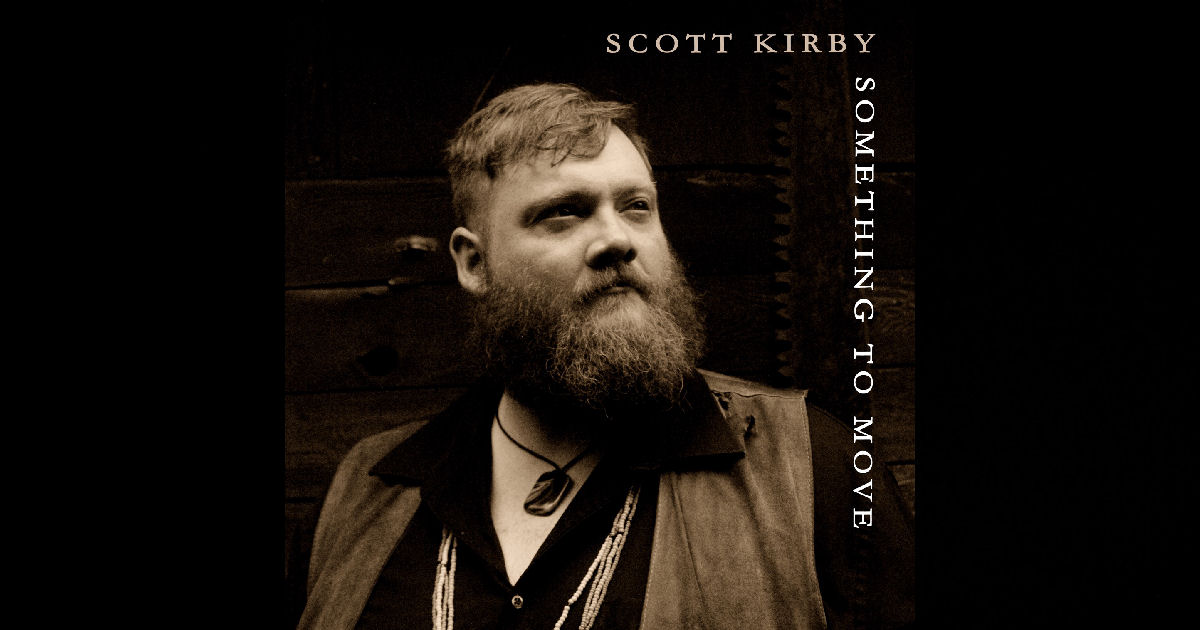 Definitely not an artist I’ve forgotten – Scott Kirby made a solid gold impression with a tenderized tune he put out last year called “Love Is Just” that showed the depth of his passion & songwriting were going to continually lead him to excellent results when it comes to the music he makes.  I’d definitely argue on behalf of that undeniable passion & well-crafted songwriting of Kirby’s showing up again in full-force on the rhythmically-inclined single “Something To Move” – different style of song than the last time we had Scott on our pages, but mannnnnnnnn, same high-caliber & exceptional quality without question.

Smartly starting out “Something To Move” with lots of space & room to grow, you immediately notice the incredible tones and technique in the guitars as the song begins.  Soon after, Scott’s soulful vocals are revealed and threaded into the flow perfectly…think of the flow akin to something like an acoustically-driven “Walk This Way” by Aerosmith…it’s got that swagger to the way it moves, you’ll hear it.  Certainly different enough to not nearly be the same song, but you’ll get the idea of what I mean in the verses of “Something To Move” – as far as the rest goes, he shifts into that like…all-inclusive party atmosphere of the classic writer’s groove-era, probably closer to the like, Joe Cocker side of the fence.  Dig the background vocals, they sound great – and the drums & bass do their thang and hold the rhythm together firmly…definitely no complaints when it comes to the tightness of the musicianship and final quality of this single – people will love this and the widely accessible sound is going to definitely work in Kirby’s favor.  From the tiniest of bar stages to the biggest of stadiums out there – “Something To Move” is always going to come out sounding massive no matter where you hear it…it’s the kind of cut that’ll bring the crowd right to the floor…the kind of groove so strong you can authentically feel it moving you.

So due to that comforting familiarity in the rhythm & flow and the spot-on performance & production – it’s pretty damn easy to get right into this tune of Kirby’s, no doubt about it.  That chorus alone has such an addictive energy to it that it’ll get you chanting along with it from your couch while you listen.  No complaints to be made when it comes to the execution here…all the corners have been tightened and “Something To Move” certainly hits the mark when it comes to provide an all-around good time.  All this wonderful stuff being said – from my own personal perspective and the way I hear this tune, the star of the show really remains the star of the show here – and rightly so.  The guitars of this cut have every bit as much personality, charm, and character as the man on the mic does with his gritty-meets-melodic vocal style – Scott’s taking what could have been a good song here and making it a great one essentially.  Credit where credit is truly due – the guitars are freakin’ fascinating to listen to on “Something To Move” and the confident charisma of Kirby on the mic is dripping with cool at every moment – you really can’t take your ears off this guy.  He’s clearly right into it on this new single…and as a result, when we’re listening, we really can’t help but feel the same – it’s the kind of passion & enthusiasm that’s contagious in all the right ways.  Solos are incredible…the lead-guitar tones in general are phenomenal…which I think for the music-heads out there, gives a track like “Something To Move” that extra edge of not just being another verse/chorus/verse cut in the world, but one that has several layers to dig right into.

And what is that?  Is that one of them voice-modulator things in the chorus as well?  I’m thinking it is.  It could be another kickass effect on his guitars…but I’m thinking he might have just dragged out the ol’ talk-box here to add just a bit more personality into the mix.  Whatever it is, again, it’s another cool contribution to the atmosphere & stunning music surrounding Scott…but at the end of the day, it’s gonna be the guitars & main vocals from Kirby that people will really remember when it comes to what they’re hearing on this single.  Well…that & the hooks of course…they’ll be singing those for days as they’re turning this tune right up…and who could blame anyone for doing that?  Scott’s got a solid scorcher here that’s bursting with rhythm & passion at the seams…another great tune from what’s clearly an artist that gives everything he’s got to his music, every time.

Find out more about Scott Kirby at his official website at:  http://www.scottkirbymusic.com