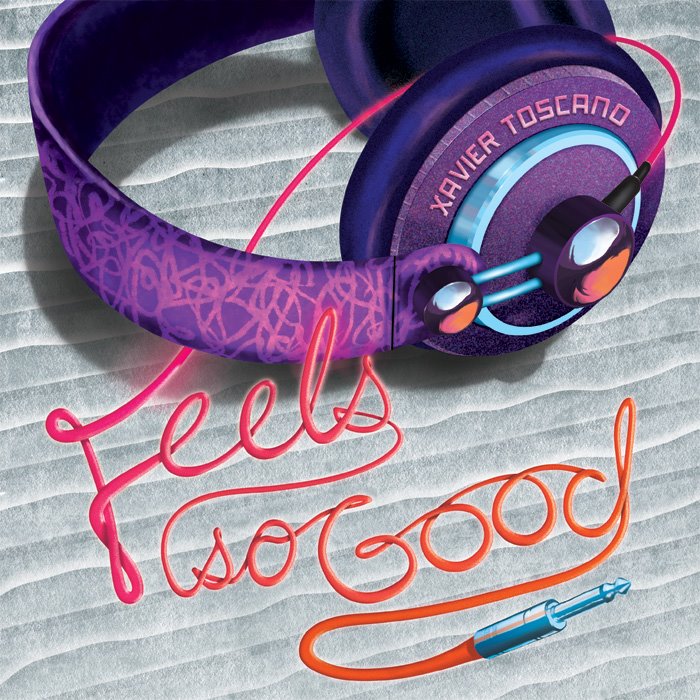 Huge fan of this sound; let me say that right off the bat. I’m not totally sure what I thought I was in for here…the name…Xavier Toscano…I suppose it threw me off just slightly. Not much, just a bit. To me – that sounds like a name born for the dance-music world, but what I found in listening to Feels So Good is that Xavier Toscano actually has just as much in common with the pop-indie movement of the past decade…a ton of these songs are written in a much more straight-ahead, well…song-like fashion, as opposed to an endless drone and beat that dance-music often solely relies on.

Instead…Xavier relies on the fact that he writes an amazing track. Oh hells YES they’re all danceable…but yeah, not gonna be me to declare this as part of the dance-music genre. Despite all intentions…I just can’t see it fitting in there. Electro-pop? Who knows. I hate genres.

There are zero mistakes on the opening three-tracks, the standard length of an introduction for people listening to new music before they need to go back to their i-phones. I can only imagine that this is going to pay off big time for Xavier; opening tracks “Intro/Feels So Good,” “Never Wanna Leave,” and “The Remedy,” start this album off with such a vibrant, electro-energy it’s impossible for it to not get its hooks in you fast and permanently. I’ll be the first to admit, this might not have been the first thing I would have reached for, being more rock-inclined these days, but now that I have? Now that I have I’ll be reaching for this energy-filled, completely uplifting album on the regular.

Had I NOT been sold on Toscano already, “Runaway,” and “Apologies Wasted” would have done so. Xavier doesn’t leave behind the energy so much as he switches to a more melodic vibe for these next two…and at this point, my jaw is on the ground. Do I already have a contender for best new sound of our NEXT year to come? I really think I might. I’m five tracks in and I know I’ve found an album that not only myself, but that this entire studio’s massively extended family, and you, will completely go insane for. Toscano is the kind of artist that really makes you scratch your head and wonder just how music like this can stay under the radar for so long. This guy needs to bust out – and we’re all responsible to help him out from the moment you listen; it’s the kind of spirited music that makes you truly root for the guy that masterminded it all. “Apologies Wasted,” has that electro-pop energy & vibe that really elevates a song when combined with a perfect performance and recording like Toscano has here; makes a song that was already a huge contender for single-stardom become the easy choice.

But of course…for ME…the infamously-bearded-sucker of all-things-melodic…it just doesn’t get better than Xavier’s fragile performance on “Castles In The Sky.” What an absolute gem and beautiful, beautiful song. Pretty much left alone to piano, strings and his instincts for melody & songwriting, this stripped-down performance shows the softer side of Toscano for sure, but what a privilege. I can almost hear the studio debate, were this a major-label artist, with the execs FREAKING out cause they know they’ve got a golden track…but where do you put it? Up until this point, Feels So Good had more or less declared itself to be within a certain frame of electro-pop…but once “Castles In The Sky,” starts up, all convention to this album goes right out the window – and I LIKE it. I like it a lot.

Take the track to follow, “Nas-T-Nize,” Toscano brings up the vocals and flow to a whole new place he’d yet to go, climbing up for a high-verse with a steady groove & rhythm, combined with whispers and background vocals against a beat that is another deviant from what we felt like was his electro-norm. So…going back to my previous comment about him not just being a dance-music artist…these two songs along, set perfectly in the middle of Feels So Good….go a long, long way to proving my point.

Even as he brings back the electro-energy in “Watch Out It’s On,” Toscano never once relies on anything simple, nothing sounds like the beat before it. Sure, many of them echo the energy, that’s his style; but so is to keep us guessing, and INTERESTED through some incredibly dynamic parts in his songwriting. I’ll fully admit, this particular track wasn’t my absolute favorite…but let’s just make the argument for a second that maybe it is one of the weaker tunes on the album…how awesome is that? It’s still a freakin’ wicked electro groove, albeit more aggressive in style, but still – if this is as ‘bad’ as it gets – that’s about as awesome as you can ask for an album to be, cause it’s not a bad song at all. I would potentially say much the same for “You Make Me Feel Mighty Real;” it’s good too, but not quite where I’ve already found Toscano to be at his incredible best.

Like I said…this guy digs IN though; he’s not quitting on this album at any point. “Unstoppable Fever,” adds another dimension to his sound, this time with a nod to the old-school with a horn-infused, bass groove and getting right down! This one might be a little on the disco-side of life for many, there’s no mistaking the feel and vibe of this cut; but I thought this was a risk that worked. It’s a subtle groove, but it’s one that really managed to find solid ground.

As if the tremendous impact of Xavier Toscano’s music hadn’t been enough, he brings it up a final notch to make the memory last on the final cut, “Made It Look Easy.” This last track left me with a real respect for the mix on this album…I really like the way this whole album came out in the recording and the production team behind Xavier certainly deserves some major kudos. With excellent writing, dynamic sounds and a sparkling genuine performance all in check, the fact that this album came out sounding as perfect as it has really puts this electro-entertainer in a prime position to succeed. I can certainly tell you from my own perspective, mission accomplished; this guy’s got me hooked for life and I can’t wait to hear what he comes up with next.

Keep an eye on this guy…nothing’s gonna stop him. https://www.facebook.com/Official.Xavier.Toscano