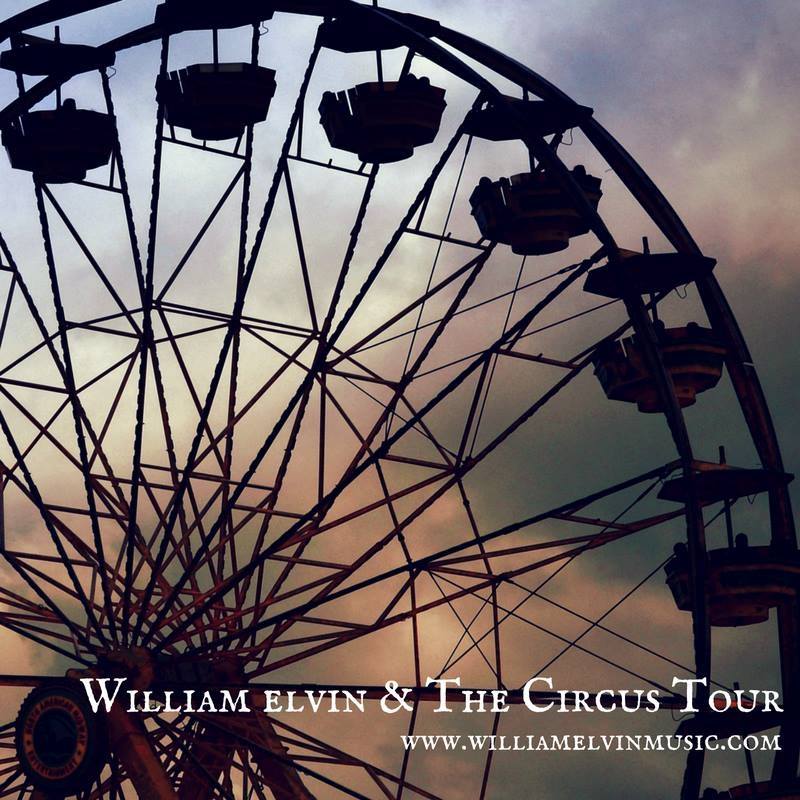 I’m guessing lots has changed for young William Elvin since the last time we had a chance to interview him on our pages.  Take for example…well…the very moniker of the name on the review here, William Elvin And The Circus Tour…I’m thinking even that has been debated in between the last time we talked and now.  I’m no kind of psychic whatsoever – but you kind of get that feeling when the digital copy of the song you’re reviewing is actually tagged with ‘William Elvin And Happy Days Ahead.’  Song title itself hasn’t changed a bit no matter if I’m looking at it on paper or listening to it though…so we’ll stick with that as a certainty…for now!

And though I’m not quite sure about where The Circus Tour comes into play at the moment on this acoustic-guitar/vocal combination…I’m at least reasonably sure that’s indeed William Elvin we’re hearing.  No acrobats or clowns have made themselves known on this tune…not that I can hear.

What I do know for sure, is that William has put together quite a beautiful gem of a song here.  “But I Love No One But You” sounds like a tough love song emotionally…I could potentially be getting some of this wrong, but lyrically it sounds like the first foray back into the pursuit of love after getting his heart stomped on previously.  There’s no doubt about whether or not William is writing about a new love that helps him escape from something, someone or some feeling that he’s been trapped inside of for a long, long time.  Lyrically…it twists and turns through these emotions and though he sings beautifully, clearly and passionately…it’s a bit tough to be certain of what this new love is taking his mind off of other than to simply know it’s been difficult for him to do.

I like the acoustic guitar quite a bit…it becomes more of a subtle-factor in the melody once William begins to sing and guide it along with his vocal-melody, but there’s no doubt about it – if you’re listening for it, you’ll hear it’s actually quite beautiful and very well played.  He’s written it all in a pretty easy-listening/adult contemporary style…you could probably argue indie-folk as well…but it’s quite inviting to hear.  The pacing and tempo of the track fluctuates between verse and chorus with excellent plucked notes and clever structure that really does sound like a magical moment in time.  I think if anything…as difficult as some of these feelings that he’s describing in the words are…I still think what he’s really looking to communicate here is just how special this particular moment in time really is to him.

That feeling…those raw & real emotions & wonderful sentiment come through the music and sound in Elvin’s voice incredibly clearly.  I like the way he sings these words quite a bit…whether or not I’m fully getting the meaning or story behind them is of course another story; I think I do…but it’s always hard to be completely sure.  It could very well be the details of one particular night…which definitely leads to the feeling of the magic in this moment he’s describing.  He does a spectacular job of using imagery in his words…and that approach to the chorus is audibly-intoxicating; you can hear that it’s right at the very top & pinnacle of Elvin’s vocal-register…and each time he goes for it, you’re rooting for him to get to those notes way, way up there that he’s searching for.  Personally, I really appreciate the way that he DOES get there…he doesn’t hide the struggle to get to the very top by masking it in effects or auto-tune…that’s all him & all-real…and honestly, the chorus has a truly beautiful sound.

“But I Love No One But You” is a melancholy beauty – but a beauty all the same.  I really dig genuine emotion in music, and this song has plenty of it.  Whomever Elvin has written this song for…he’s really laid it all on the line here…it’s part explanation, part apology and part justification – and for an intimate acoustically-based song, these feelings and thoughts of his radiate an exceptional amount of beauty in the mix of complexity in the emotions and unassuming nature of the music.  Beautiful!

Tags: But I Love No One But You Singles sleepingbagstudios William Elvin