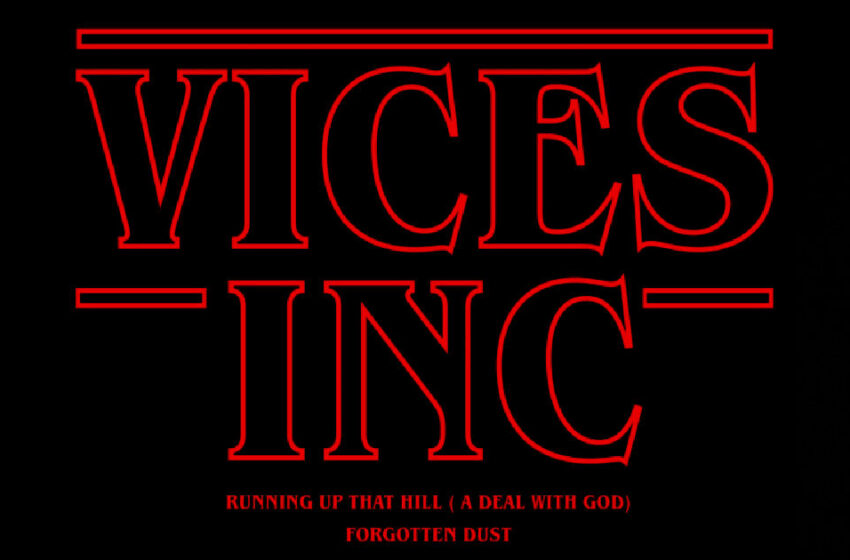 So!  Probably best that I preface this a bit with the fact that I dig this band…Vices Inc seem like good people, and I remember them well from reviewing their singles “(Hold On) Gravitron” and “More Is Never Enough” from last year.  This year, they’ve returned, sticking with that theme that a song title has gotta have at least SOMETHING in brackets, with a cover of Kate Bush’s “Running Up That Hill (A Deal With God)” that’s packaged online with their song “Forgotten Dust.”  I’ll also remind y’all that I’m freakin’ OLD now…I feel like I’ve been listening to “Running Up That Hill (A Deal With God)” since Kate originally released it way back when…though I’ll admit…I was probably only around five years old when the song first came out.  Anyhow – you get the point…not only was this cut on some of the very first mix-tapes I received as a kid from my dad back in the day, but it’s a monumental song that has been covered countless times throughout the years, and then re-popularized as of late via the Stranger Things soundtrack, which you can see is pretty much the reason Vices Inc took it on, based on the artwork.

And I ain’t gonna lie to ya…there’s risk in going this route.  Sure, there’s going to generally be a lot of traffic given how much people have been seeking this song out since that now-legendary episode of Stranger Things aired…but the people out there still gotta like what they find, know what I mean?  I’ll readily admit – Kate’s original is obviously legendary…and it provides the real blueprint…one that kind of needs to be stuck to, in my opinion, if you’re gonna take this song on.  From my perspective, Placebo damn near perfected it back when they released their cover back in 2003…and there’s a reason as to why I feel that way, that directly relates to what I feel is missing from this variation by Vices Inc.  In a word – it’s LETHARGY – that’s what’s missing.  Weird right?  Who wants THAT in a song anyway?  I do!  In context of this particular single, it’s paramount…it’s crucial…it’s undeniably important to what this song is all about, what it symbolizes, and what it represents…how it moves, and more importantly, WHY.  We need that feeling of everything being so draining, that there is practically no choice BUT to run up that hill…it’s the bottoming-out of energy, want, and will, that creates the crucial reasons as to why Kate decided to make the trek in the first place…and without that, I’m not sure the theme would even work.

In fact, I think my theory might be true based on the results of this Vices Inc cover turns out.  What I dig is that they tried something new with it…I’m just not sure it’s what this particular song calls for is all.  In giving “Running Up That Hill (A Deal With God)” a more noticeable energy and power in the music, right away, they’re missing that LETHARGY, and replacing that with the feeling like they could run a marathon at any given time.  Ultimately, that practically changes the whole meaning behind the song, you feel me?  When we feel that disconnect, it makes us question the timing of it all – did Vices Inc decide to cover Kate’s song because they love it that much, or did they choose to cover this because of the hype surrounding the whole Stranger Things episode?  It CAN be both of these things to a degree of course, but I feel like it’s much more of one than the other based on the results…”Running Up That Hill (A Deal With God)” simply needs that devastating aspect to it for it to work…and Vices Inc has got something that’s a bit closer to that feeling of Rocky running up the staircase, than Kate “Running Up That Hill.”  It’s more “Eye Of The Tiger” than it is “A Deal With God” in that respect.  I know what you’re thinking y’all – what kind of JERK wants LESS energy in the music they’re listening to, right?  Me!  I am THAT DUDE…but only when the song truly calls for it…in this particular instance, in my opinion, it’s one of those rare times where it’s really crucial to include some devastating desolation SOMEWHERE…it’s what eventually makes the ultimate payload in this song pack as much punch as it should, and without the more despairing aspects of it, it’s hard to reach its most inspired peaks.

Alright…so…some positives…of which there are still MANY.  First of all, regardless of how I, or anyone feels about how the version of “Running Up That Hill (A Deal With God)” sounds or how it came to be – performance-wise, there’s everything to be proud of…Vices Inc play like a band on fire when it comes to the passion in their band & the pure joy they get from playing together, and we can hear it – I love that.  What I ALSO really love, is the second tune in this split-single – I think “Forgotten Dust” is straight-up spectacular, and they’ve nailed this song from beginning to end.  The depth to found in this second cut is massive!  We feel all the power in the emotion that this song should have…smart synths/keys…killer guitar solo…drums that make an impact…an astonishing performance on the microphone in both the lead & backing vocals…Vices Inc as a collective unit, knock this second song right outta the park into next Tuesday.  As far as I know, this is an original from the band…and perhaps that’s what makes the difference here…we feel that authentic connection to the material…again, in my opinion, that’s what gives this song the edge between the two.  We feel that passion & purpose combined…honestly, it sounds fantastic straight from the drop.  Eleanor sounds like a brilliant combination of incredible lead singers that have paved the way for her today…something like a Shirley Manson-meets-Tanya Donnelly – which is certainly A-OK with me y’all.  Jagger crushes the guitars/bass like the dude does every time, and Kristy remains a professional force on the drums…structurally-speaking, “Forgotten Dust” uses the space and dynamics brilliantly…LISTEN to how amazing the breakdown in this tune comes out around the 2:30 mark will ya?  “Forgotten Dust” is nearly six-minutes in length, and they maximize every second of it…the bring-back of the build-up towards the fourth-minute, and surge back into the hooks is as moving as it is memorable…I felt like this was Vices Inc at the most incredible I’ve heard them to-date so far.  Which is sayin’ something y’all – I really liked “(Hold On) Gravitron” from last year – that’s STILL a great tune…but admittedly, it’s probably on the more fun side of sound, as opposed to the real weight of emotion, the gripping power, and undeniable substance that a track like “Forgotten Dust” truly has.  Definitely a step in the right direction if you ask me, if not a full-on GIANT LEAP…I certainly remain a fan, and I’m always looking forward to what this band based out of Portland cooks up next for us all to enjoy.

Find out more about Vices Inc from their official homepage at:  https://www.vicesinc.com