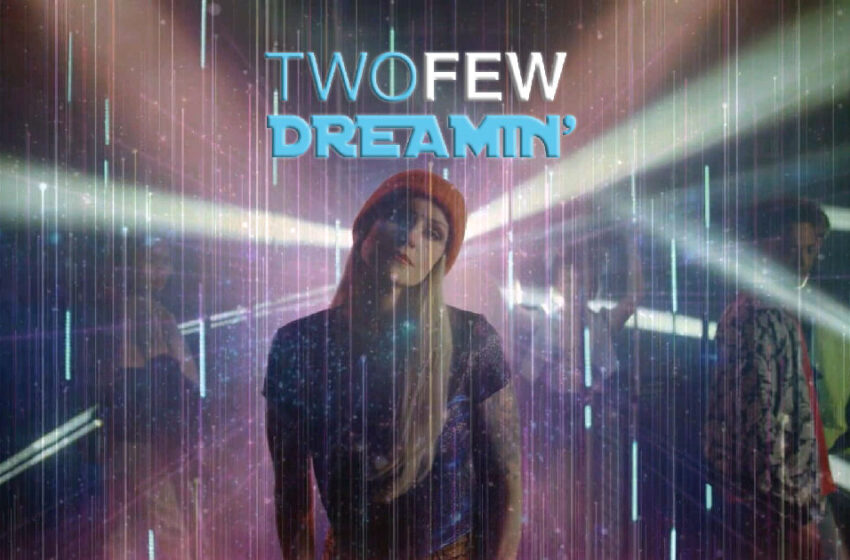 Back at the beginning of November, we were introduced to TWOFEW for the very first time through the release of their debut single “On The Run” – and lo & behold, they’ve returned to our pages with a brand-new cut out & available for all you fine folks out there to enjoy, called “Dreamin.’”  I had mentioned in the previous review, somewhere along the lines of it I’m sure, that…TWOFEW really don’t sound like your typical ‘new’ project at all – the tightness in their songwriting & musicianship shows a wisdom & skill that would likely trace back much longer than the band itself does, likely to the early days of Michael Lazar, when he was still rockin’ with his band Complicate/Simple on the ol’ Phoenix stages.  You’ll find no complaints from me on that front…there’s no rules that say you can’t assemble a group of all-stars to make your music happen, and it’s crucial to use the experience you’ve had over the years in any capacity you can!  TWOFEW can certainly use the expertise of a veteran of the scene like Michael in the mix, and of course he can continue to build on his own musical legacy in the process with his new band.  And FYI…if ya wanna know some fun facts for trivia night – that’s Mike’s wife Danielle on bass, his brother David on the ol’ lead guitar…and then lastly but not leastly, over there in the corner, is Erik.

Incidentally, Erik’s so freakin’ cool he doesn’t need a full-on connection through the bloodline, or even an instrument for that matter, but according to the credits & the liner-notes I’ve got in front of me here, he’s playing rhythm guitar for ya on “Dreamin.’”  What kind of hazing rituals did he have to withstand in order to crack the official lineup of the family band?  There are some secrets you take to the grave folks.

Anyhow…there’s the history…at least the abridged version to get us all caught up and on the same page here.  TWOFEW = FOURMEMBERS – remember that intense mathematical formula & you’re good to go.

Or at least…maybe you are.  Chris Lawrie shows up to lay down the percussion on this single as well.  So…okay then…new formula.  We’ve got ONESONG from TWOFEW which is a FOURMEMBER band, but for this particular song, there are FIVEPLAYERS involved.  They’re two singles in – it’s still early folks…

Returning with another perfectly well-crafted tune, “Dreamin,’” sits somewhere between The Boss and The Fray, proudly embracing a shiny Pop/Rock demeanor with deeper lyricism fueling the songwriting.  Or you could go with like…maybe David Gray and maybe The Lumineers…a combination of those kind of sounds…that’d work too.  The bright-side of comparisons of course, are that you get to toss out some really rad relevant names that work with similar vibes, but when it comes to describing TWOFEW in-full, you’d need at least a couple references in comparison to get close to a valid depiction of what they do.  Call it hybrid Pop, call it gentle Rock, call it Alternative when you can’t think of a category like every other band that’s in that genre, or call it whatever else ya like – the point is that TWOFEW bring a lot to a simple & sweet recipe, and as a result, they get quite a charming & captivating sound into their music.

The charm actually counts for quite a bit when you’re dealing with a song built on contrasting emotions like you find in “Dreamin’” – it’s because of that inspired spark you hear in TWOFEW’s performance that they can dive deeper into heavy subject matter more than most could, without turning anyone off by becoming too serious in the overall vibes.  Ultimately, this single takes on the timeless story of the small-town girl “Dreamin’” of big-city life and an escape from the confinement of what seems like anonymity, all the while lookin’ for love and keeping up the hope that tomorrow will likely be better than today was.  Highly relatable to anyone out there that’s ever had to leave one place for another with a significant distance in between point-A to point-B…it’ll make you question a lot of things along the journey, but it also sets you free in many ways too – and that’s the feeling so well transmitted to us most in listening to “Dreamin.’”  You feel that potential, possibility, and hopefulness…the idea of starting over, and the allure of the personal freedom that could verifiably come along with it…of course, it COULD become a careful what you wish for situation…you gotta be on guard for that.  And sure you have to go through plenty of emotional hardships quite likely prior to get to that point – maybe even afterwards; but when you finally come out on the other side of personal disaster & find that place where you really belong, it feels as inspired as this song genuinely sounds, just like “Dreamin’” does at its very core & chorus.  That cautiously optimistic feeling is bound to be familiar to many and resonate strong with us all as Michael belts out his most expressive vocals, insightful words, and catchy hooks laced through the new TWOFEW single – it’s another seriously stellar performance from all hands on deck in the band, and another song with incredible potential to reach a huge audience of music-fans out there.  Through the combination of their clever songwriting, confident performances, crystal-clear production, and the natural commitment, dedication, & passion they share between them as a band – TWOFEW comes out with a wonderfully realized vision for their single “Dreamin,’” and another remarkable highlight early on to be proud of.

Did we mention there’s a video supporting their brand-new tune as well?  Because indeed there IS!

And to help TWOFEW celebrate their latest achievement in style, we’ll be posting that up tomorrow here for ya as we continue to turn this new track UP.

Stay tuned – we’re not done “Dreamin’” just yet – nor should YOU be, or TWOFEW either to that end!

In the meantime, make sure to hustle over to their main site and get yourself a FREE copy of their new single “Dreamin’” for a limited time from the official TWOFEW homepage at:  https://www.twofewmusic.com