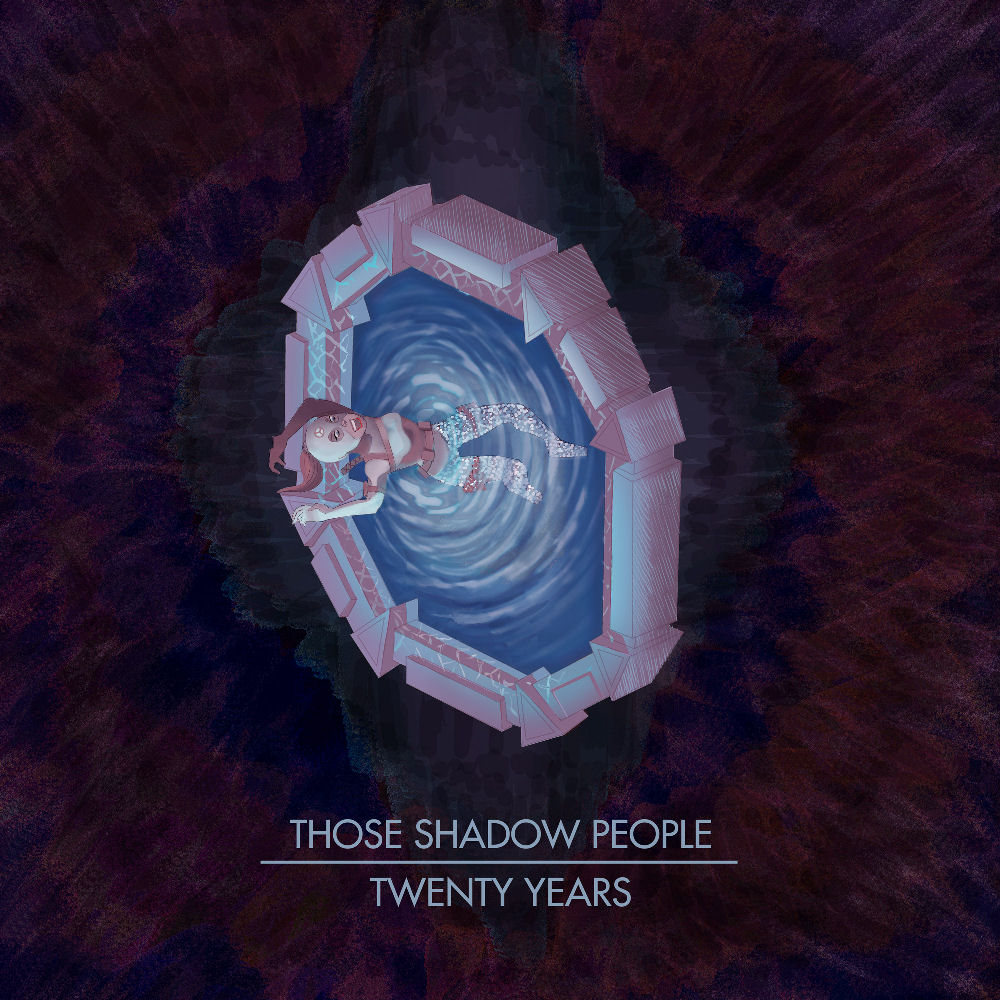 The further adventures of Those Shadow People continue in one of our favorite combinations of art in music with the graphic comic-book, issue #4 accompanying the release of their new Twenty Years EP.  Like all art…generally the meanings, tie-ins and subtle-references are more known to its creators than it is with anyone who might observe…but I’ll do my best to decode how this continuation of their music intersects within the realm of their animated universe once again!

This particular episode deals much with Sarah and her father Dr. Saber…and as per the comic-book standard, there’s largely a theme of good vs. evil that runs through the plotline with twists and turns at the end that reveal clever writing that will continue the storyline solidly further down the road.  You follow Sarah throughout most of the adventure and deal with the emotions she’s experiencing in wanting to travel back in time to speak once more with her long departed mother.  Meanwhile, Dr. Byow is attempting to more or less kidnap Sarah and bring her to The Shadow Realm…and a devious mind of a villain always comes up with a dastardly plan to carry out their deeds do they not?  The new issue of Those Shadow People (#4) definitely satisfies in terms of illustration and storyline…you get a lot of movement in the plot through this particular part of the story and it’s all mapped out in a compelling way that definitely has you reading.  Massive props once again to the animators on this project…Those Shadow People are illustrated as professionally and stunningly as you could ever hope to see in a comic.

Now again…for the record…I’m a music guy.  As much as I love the combination of art & music the last thing I can do is pretend to understand each and every element that tie the two together on any given project.  I’d assume that “Let You Go” is representative of the struggle between Sarah and her father Dr. Saber and the emotions/feelings surrounding that moment of their conversation regarding her mother.  What I do like about having a musical accompaniment, or even looking at it vice-versa and having the comic-book accompany the music…either way you examine it, they both get an ability to tell their story with more extended detail by complimenting each other.  I dig the progressive writing & jazz/rock vibe to “Let You Go” and how the music takes shape throughout…I wasn’t 100% sold on the backing female-led vocals, but the rest I thought worked unquestionably well.  There’s something about having these voices and words representing the characters in the comic make any slip in tone more easy to accept…I’ll give them that…you root for these guys and any slight imperfections are forgivable.  It could be one layer too many on that “Let You Go” that’s holding it back from having the impact it should when it comes to the backing vocals…but the idea overall is a solid one writing-wise.  Great parts written into the keys and drumbeats throughout “Let You Go” and I dig the ever-enveloping sound to the atmosphere.

Yeah…you see…when I try to figure out something like “The Last Time” and its relation to the comic-book I definitely get a little lost and out of my own element.  I’m not quite sure which part of the storyline this necessarily connects with, or how exactly…but I do dig the vibe.  Feel roughly the same about the vocals being slightly bizarre but again feel like they embody that animated or otherworldly spirit.  From the breakdown that occurs towards the end, I’m feeling like this one corresponds to Dr. Byow’s storyline…maybe this is the thought process in his head…I dunno.  I could make theories all day surrounding this one but I’m telling ya right now, whatever it might mean to us as listeners is probably likely far away from how tied-in it might truly be.  I do dig the Dandy Warhols-esque vibe that “The Last Time” has…it’s very laidback & sweetly hypnotic like that.  That’s the only thing that makes me question whether or not I’ve got its relevance to the storyline correct…because of that sweet vibe that runs through it…sounds much more gentle than the anthem to a villain’s role.  Loved the solo around the 3:40-ish mark and the instrumental section that followed afterwards…smartly placed elements in the writing with a great keyboard solo with the otherworldly space-sounds kicking in.

“The Machine” sounds much more like a villain’s anthem of sorts…or it could be a hero’s determination…  It could reflect Sarah’s desire to build the portal to take her back to her mom…it could also reference the evil plan in place to take Sarah back to The Shadow Realm.  Dig the combination of synth & beat here…thought the vocals were more in-line and focused than they’ve been so far on this EP and still managed to retain all the personality they have.  Word-for-word it’s a little harder to discern as the vocals are blended much more into the music of “The Machine” – but you get that determined and somewhat triumphant feeling in the atmosphere of this one.  Good or bad…that feeling could come from a job well done on either side of the moral-fencing…so it’s a little hard to say once again as to where exactly this might fit in with the accompanying comic.

Comic-book aside…because you’d have to be a next-level genius to know where an instrumental fits into the story-line…I’m gonna stick to what I know best on their title track “Twenty Years” – because I’m a music-guy at the end of the day more than anything else.  I like to think that over the years & years of listening I’ve developed a credibility with you all for a reliable opinion on what’s good out there…and let me just tell you…Those Shadow People have BEYOND nailed this tune.  “Twenty Years” isn’t just another good song – that’s flat out one of the best tunes I’ve heard this year – and at nearly six-minutes in length I STILL never wanted this song to end…like, ever!  This is one of the most gorgeous electro-melodies I’ve heard this year without question…and an extraordinary find here on the new EP from Those Shadow People.  The gentle & inviting sound of this tune is absolutely exquisite…the transition mid-song is fantastic and overall the emotion in this song is something that audibly resonates deep within us all.  Definitely the kind of stunning tune that makes you pause and consider LIFE while you listen…deep within thought and immersed in the most incredible atmosphere I might have heard from this crew to date.  “Twenty Years” is 100% worthy of the album’s crown-jewel and moniker…this is a truly beautiful song and executed with complete perfection, heart and genuine sincerity…and all without a single word.

Of anything storyline-wise and music-wise being related, I’m most sure of “Can’t Come Back” being related to the surprise ending of issue #4.  I don’t want to ruin anything for you all out there…but let’s just say this most likely represents the thought process in our hero Sarah’s head as she begins to familiarize herself with new surroundings.  Or it could also possibly reference the mindset of what we can/can’t accomplish in terms of which trip she was supposed to be taking…and where she was supposed to end up as a result.  At least this is the theory I’m going with!  You know…the whole ‘time marches on’ kinda theme…

I think the looseness in the vocals pays off for Those Shadow People in their final tune.  “Can’t Come Back” seems to really work with a vibrant set of colors…borrowing from indie, psychedelic and progressive ideas to create a really unique and memorable melody at the end.  I really dig the sparkle in the sound of the guitar tones and I like the main-hook of the vocals on “Can’t Come Back” – it all gets stronger and more captivating as it plays.  The wildness of the backing vocals oddly also worked in their favor here…I thought the combination of how they came together on “Can’t Come Back” was probably the best example of that at their best on this record.  Maybe a questionable note or two on that guitar-solo at the end of the cut…but really people…it’s a solo, so c’mon; anyone who’s ever even attempted one knows the beauty of each note lies in the beholder!  I can forgive that here on “Can’t Come Back” because everything else that followed fit so well…it started shaky but the solo ends on strong notes.

Overall it’s another solid addition to what’s been an exciting adventure with Those Shadow People.  Whether separate or together, the material they create is highly-skilled art with defined concepts and real goals in mind.  I think the idea that anyone might ‘get it all’ is probably a little bit out there…but I think there’s also tremendous value in allowing your imagination the attempt and privilege of being able to at least consider what the associations between them might be.  In that sense…no matter how you slice it…Those Shadow People have created a noteworthy addition to their legacy in both print and audio, including one of the best instrumentals I’ve heard this year.

Check out what Those Shadow People are up to at the official page right here:  http://thoseshadowpeople.com/