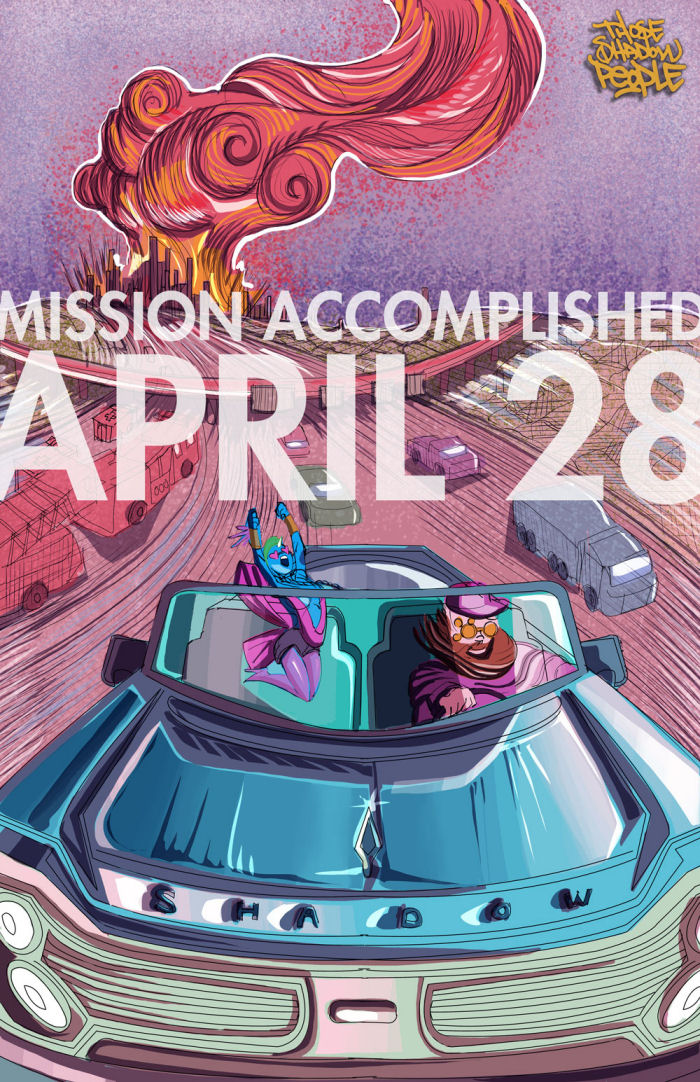 I’ve often said that the ingenuity of the indie-music scene has no limitations…no rules when it comes how to bring attention to your art, your craft, your music… Today we have a genuine combination of these finer things in life, art & music; Those Shadow People have put together thematic music to accompany their illustrated storylines in their own comic-book. How AWESOME is that right?

I definitely spent a LOT of time & money on comic-books back in the day and still get that urge whenever I pass an official store. Definitely got enough experience with music to get through this review and pass this project with a credible opinion or insight I figure…maybe even two! You know me well enough by now to know I love a great concept driving the creativity behind something unique; I’ve never had a comic-book/music combo sent to me before – let’s check this out!

So here’s the first cool thing I learned…it’s not musicians based in a local area, but rather spread-out all throughout the U.S.A.; together through online collaborations, Those Shadow People make their music and art come alive. Thematically, the band writes towards the theme of the storyline set out in their comic, which involves Those Shadow People battling between good & evil within The Shadow Realm. It’s all heavy on the fantasy-genre & superhero aspect – what good comic-book isn’t?

These artistic masterminds have put together super-coloured brilliance in both music and illustrations. Seriously…I might have been somewhat out of the comic-book game for a while, but there’s no doubt that looking at a single page or window of their strip would instantly confirm their abilities & skill to anyone taking a peek. It’s radiant.

Writer Phil Buck has put together what appears to be a solid storyline to build upon, complete with incredible heroes and villains; an entire cast of characters with a host of unique powers, looks and mannerisms. Through this preview here…I’ve been able to look directly into The Shadow Realm…and let me tell you, this map I’m looking at looks like it could have come straight out of Tolkien’s books – it’s that good. Everything I’ve seen, everything I’ve read so far from Those Shadow People seems to really have a firm grip and grasp of what this universe is going to be all about for them. Some of these characters have truly been brought to life through fantastic illustrations by Quinn McGowan and colorist Iwan Joko Triyono; they’re unique and look bright & bold to accentuate their standout personalities.

Gotta say…I’m a big fan of a lot of these characters…but without even having read a single frame, ‘Heavy Duty,’ the mysterious ‘Black Candle’ and the ‘Shadow Minions’ would have all certainly peaked my curiosities and interests based on looks alone. Shout-out to ‘Dr. Byow’ too…can’t forget that guy – he looks incredibly bad-ass.

And…I don’t know if it’s the full intention cause I suppose it would depend on how fast or slow you read, but I’ve had Those Shadow People and their Mission Accomplished EP on repeat while I’ve been writing this and reading their comic. “Lines In The Sand” starts out an interesting style of music…it’s kind of a smooth, jazzy, progressive kind of song; wonderful filtered guitar-solo towards the middle. It’s a great mix through the vocals though…and becomes more addictive the more you hear it. Almost like Bat For Lashes was hanging out with The Flaming Lips for a day and this is what came out. Around the three-minute mark – get your brown-pants ready to hide the stain when you crap yourself listening to the intensity of the drumbeat. Dude just goes off right up until the final moments…it’s wicked.

Slipping into a Beta Band-esque style through reverbed & far-out vocals, the following title-track “Mission Accomplished” is honestly another complete pleasure to listen to. The bass is otherworldly, the electrodes pulsing away in the background are great…there’s acoustic guitars, pianos…a great switch through synth around three minutes in soloing the track towards the end. There’s real atmosphere here…dense…it’s a wonderful audio-mix that is a true pleasure to listen to.

Smart combinations of sounds here; the opening of “Dawn Of The New” is superb – and it only grows, builds, swells and gets even better from there. By a minute-and-a-half in we’re all swirling in a new-age brilliance akin to the sound Radiohead found upon their In Rainbows album…again, most likely crossed with the majesty and mischief of The Flaming Lips. By the end of this song, they’ve brought it up to the rafters with bass, vocals, drums all raising this track up to the maximum of its supreme potential. This might be as hopeful as their music made for The Shadow Realm might find itself to be…I’m interested fully in where this goes from here for the final two on Those Shadow People’s Mission Accomplished EP.

And it seems like we trip right into the land of 70’s psychedelic-meets-80’s-progressive-jazz, resulting in one heck of a combination of sound! Sounds like it could have fit right into a dance-party on the old Electric Company show back in the day before my own; but more importantly, it sounds truly authentic; like it belongs there. And I should clarify – it’s not that the sound isn’t relevant, it entirely IS, it’s great to take a trip-out to another time…another dimension. I’d have to assume the main goals of Those Shadow People were to create these thick & rich textural atmospheres in their music – and as the title itself states, Mission Accomplished. The only convincing your ears should need at all is the switch that takes place in this amazing song called “Chromium.” In a performance that a band like Explosions In The Sky or Mogwai would be proud of…this track takes you right off the planet and into the atmosphere in a true highlight performance on this five-song set.

With “Mission Accomplished” coming back for a ‘Bad Luck Clovis Remix’ this rad set of out-of-this-world music drifts hazily along a sweet drumbeat & acoustic-guitar pairing. Of course there’s all the electro-elements and atmosphere you’d be expecting…but this minimalized version does well to send the EP out on the right notes.

Those Shadow People…what can I say gang? A LOT of creativity here in this project and I’d assume that not even the sky is the limit for this fantastic ensemble of artistic talent.

The EP officially launches in over a month’s time…I’m just here to spread the word on a fantastic project I was lucky enough to catch wind of and preview early! Make sure to follow along with what they’re up to at their official pages so you can be the first to know when the mission becomes fully accomplished on April 28th, 2015!

Find them at their official page: http://nematoderecords.com/thoseshadowpeople/ and support them at Facebook here: https://www.facebook.com/ThoseShadowPeople