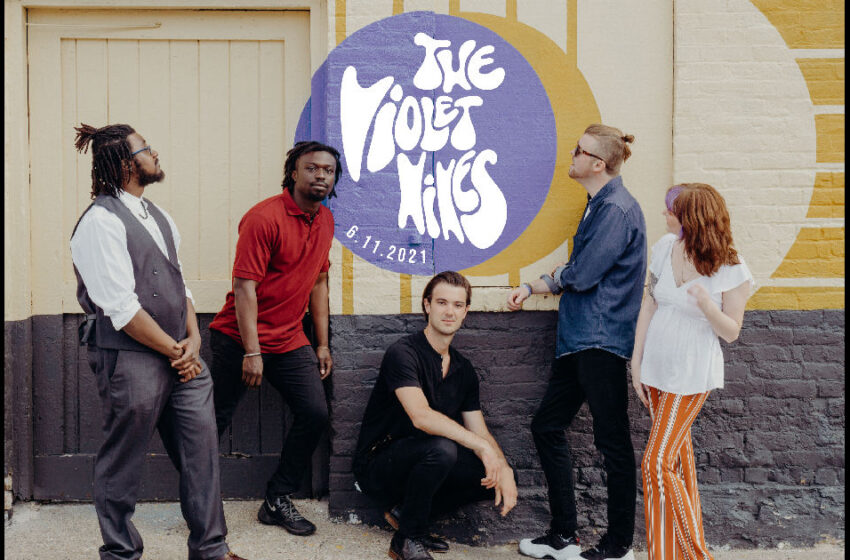 The Violet Nines – “Can We Go” – Single Review

Believe me when I tell ya, more than half the scene keeps me awake at night.

Some of the time, that’s simply due to a great song being stuck in my head…but I’d say the majority is spent tossing & turning over whether or not so many of the fantastic people I run into, the artists & bands, are gonna keep on goin’ over the years and all end up in the spotlight where they’re meant to be.

And then there are bands like The Violet Nines…the kind of which I don’t spend a single second thought worrying about whether or not they’ll make it to where they wanna go, because it’s so much more obvious that they will.  In fact, I remember listening to their title track from their 2019 Cloud 9 EP…about a full two years ago now.  I remember not only digging their sound and the stunning level of musicianship The Violet Nines possessed…you know what I’m saying – they were instantly the type of band that had displayed all the right ingredients, and clearly, they were well on their way to the spotlight they belonged in.  Nothing else to see here folks…it was a story as simple & straightforward as that.  I mean…”Cloud 9” was the kind of song you’d listen to & know they had found all the right pieces & players for their band…I slept comfortably knowing that this band based out of Minneapolis would be just fine continuing their course over the next years to follow, and that they’d find the success they were seeking out.  Lo & behold – here they are in 2021, with a brand-new shiny tune that proves I was right.

Ahhhh.  Ain’t that great?  I know I love that feeling.  It’s nice to see that some things never cha…

…am I going nuts, or did The Violet Nines actually get even better somehow?

Look.  I’m the last guy that ever wants to disrespect what anyone has accomplished in the past, even my own work when it comes right down to it.  I stand behind the things I’ve said, forever and always, but that doesn’t mean my opinion of something can’t still evolve, just like the music you’re all making out there.  In fact, if you’re all playing your cards right and progressing forward in what YOU do, essentially every review I write should be somewhat of an attempt to shout louder about how much I love ya now in comparison to what you’ve already done in the past.  Evolution, in art & music, is a great thing – and always.  So don’t go getting it twisted…I’ve been a fan of The Violet Nines from my first opportunity to listen to’em – they were great before…it’s just that…well…I mean, it’s just that they’re even greater now – aren’t they?  Because that’s ALL I can think when I listen to their brand-new single called “Can We Go.”

Not only does the band sound more experienced, tighter, and more into what they do than I remember – but they’ve made some extremely noticeable changes to the lineup.  From what I can tell & what I can hear…I believe if I’ve got this correct, they retained a core four in Nick, O’Say, Ben and Jon – they’ve made a solid switch on the bass to Delon Smith, and added the absolutely incredible vocals of Hayley Lewis up front on the microphone.  If you read my last review on The Violet Nines, believe me when I tell ya, that last position in the band was probably the least likely for any of us to have expected would change.  Yet here we are and that’s the case.  Again, no disrespect to past achievements because The Violet Nines have always been capable of kickin’ out a smooth jam with full confidence in the band they’ve had – but this…this right here is the sound of a band taking it all the way to the next-level.

Now the only mystery left to solve is why this six-piece band continues to have pictures of five of them.  But we’ll get to that another day.

As far as I understand it, it was because she filled-in for a live performance at the last minute & went onstage to crush it, that secured Hayley’s spot in The Violet Nines.  Even just reading about that moment sent my mind into a flurry of thoughts.  We so often think about this scenario happening when playing live shows…and 99% of the time, if you need another guitar player or drummer for the night, you can find one that can carry a show through to the end, even being unfamiliar with the songs.  But a singer being out for the night?  That’s a whole different level of panic I’d assume.  Thankfully, when The Violet Nines ran into this scenario, the phone number for Hayley Lewis, aka Corzine, was warm in their pocket.  Not only did she go out there and make the magic happen that fateful night live onstage – but the word on the street is that the moment she did, she became an instant part of The Violet Nines forevermore.

And when you hear what she brings to this band on “Can We Go” you’ll know exactly why that is.

I basically just went from incredibly interested to absolutely STOKED about everything/anything I’ll be able to get my hands on & ears around when it comes to the music of The Violet Nines – they’ve absolutely knocked it clear outta the park with their brand-new single “Can We Go.”  LISTEN to this will ya?  It’d be so much easier to list what’s not to love about it with that list containing completely nothing on it – but to sum it up as best I can, they rich depth they’ve put into their artistic design, incredible combination of musicianship, all-encompassing sound, and immaculately stunning vocals, is as outstanding as it gets.  I ain’t even remotely kidding when I tell ya that they’ve got one of my favorite singles that I’ve heard this year right here with “Can We Go” – this is everything I wanna hear right now.  The Violet Nines sound 100% fantastic as they play through the vibrant melody & dreamy hooks they’ve latched onto…and as far as my ears are concerned, I’ve never heard them sound better than they do on “Can We Go.”  Major credit goes to Hayley here…not JUST for the fact she’s outright exceptional in every conceivable way herself, but also for the fact that doing what she does so well naturally, has brought out the best in the band surrounding her…this is The Violet Nines at their most balanced as a result, and you can seriously appreciate the multi-dimensional talents this band has that much more because of all that.

For real…if y’ain’t feelin’ this shiny new single of theirs, you’re just made of pure stone, and I genuinely feel bad for ya.  The amount of stylistic sound & cosmic groove comin’ atcha through your speakers AND screens on “Can We Go” simply cannot be denied…and I’d imagine that even the hardest of hearts out there will only take a half-spin to catch onto that, and surrender in-full.  There’s so much charming melody & musicianship at work here on “Can We Go” that it carries a massively uplifting vibe to the whole spirit of the song as a result…and wherever it is The Violet Nines are gonna go, we wanna go right along with’em.  The keyboards are freakin’ awesome on this new single – but let’s be real, EVERYTHING you’ll hear is…the crispness of the drums…the bounce of the bass-lines groovin’ hard in the thick of the mix…the saxophone solo…and again, those insatiably awesome, sensationally soulful, bold & beautiful vocals from Hayley bring this band’s sound to an entirely new plain of existence where anything is possible.  Think along the lines of Dream-Pop…”Can We Go” essentially grabs a piece of the best of that genre, and expands it with just a lil’ more spark at the core of its vibe than you’d typically find…the results are every bit as dazzling as they are enchanting, entertaining, and all-around endearing.  The Violet Nines have the kind of sound you wanna stand up & cheer for – “Can We Go,” is quite simply as single-worthy as it gets.

They should all be extremely proud of what they’ve achieved with this latest cut.  Not only is it flawless from start to finish and relentlessly engaging to listen to at all times, but every moment you’ll hear, and every moment you’ll even SEE in the brilliant new video they’ve got supporting “Can We Go” is complete confirmation & verifiable proof that this band has evolved in all the best of ways, right into the sound they were always seeking out from day one.  I would not expect to find a different lineup in the future – that’s of course impossible to predict for a certainty, but tinkering with what they’ve got any further would just be strange to begin with – you don’t mess with perfection when it sounds like THIS does folks.  I can tell ya without hesitation that “Can We Go” is one of my favorite songs AND videos that I’ve had the pleasure of checking out this year – and I’m 100% stoked to listen to anything The Violet Nines come up with next from here on.  Which, incidentally…if you’re looking closely at their pages right now, they’re promising new music every month right now post-release of “Can We Go.”  Between that news & this remarkable single/video they’ve got here – it sounds like The Violet Nines are in for a spectacular 2021 filled with amazing new music…and perhaps best of all, it sounds like they want us all there for the ride along with them.  Through the warm glow & inviting vibes they’ve created on their brand-new tune, their stellar personalities & their professional musicianship, and the relentlessly entertaining, fun, and mesmerizing effects they’ve put into the new video they’ve got – The Violet Nines are more than hinting that we’re all about to witness their best year yet – they’re already proving it with this brand-new single.

Find out more about The Violet Nines at their official website at:  https://www.thevioletnines.com

Tags: Can We Go Singles sleepingbagstudios The Violet Nines