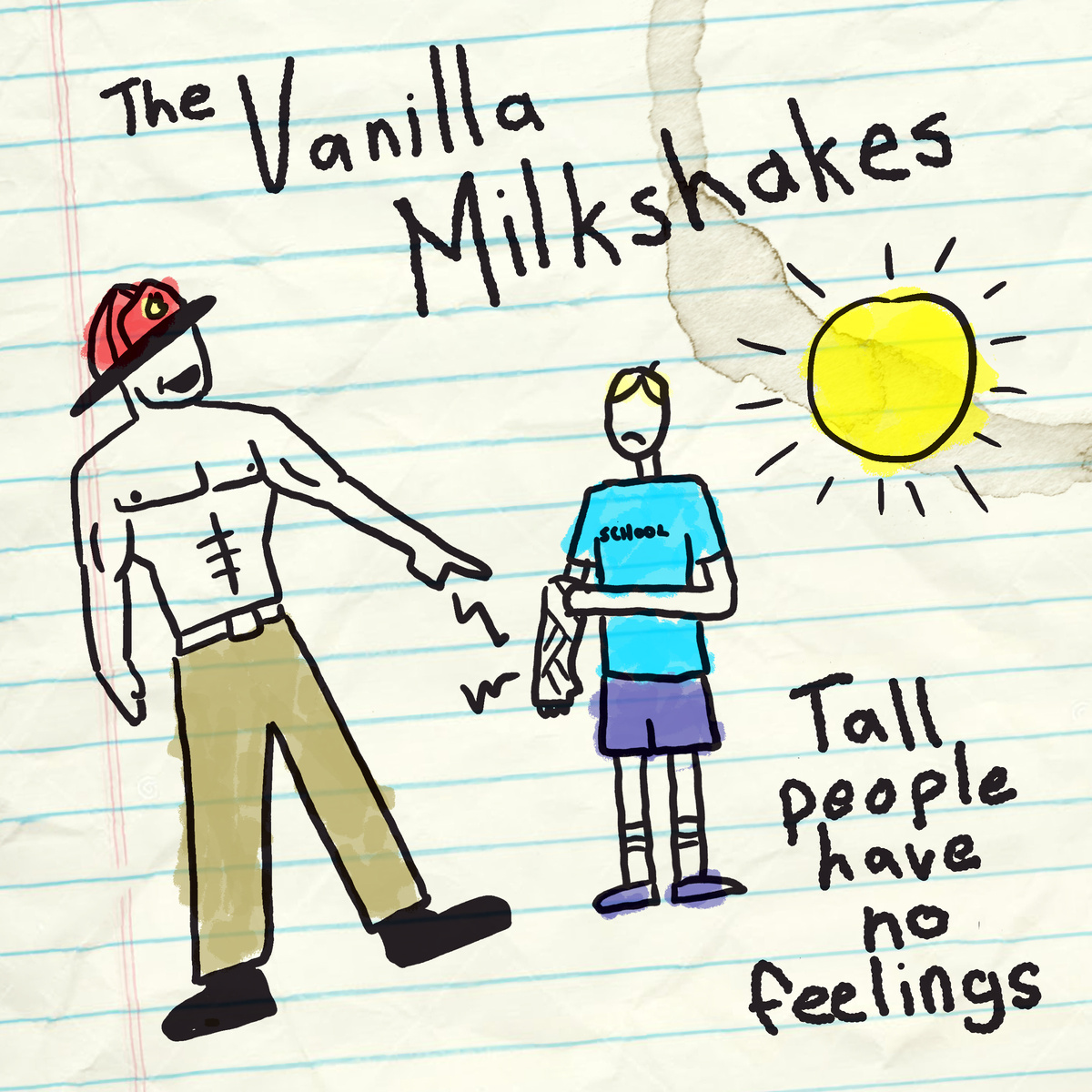 The Vanilla Milkshakes – Tall People Have No Feelings – Album Review

Ahhh…the softmore album. Predictable as all fuck, The Vanilla Milkshakes show the mature-side of themselves and pull the attitude from their music in a corporate effort to ass-kiss for real dolla-bills y’all.

Okay…that’s not the least bit accurate…but they make a reference to Spin magazine on their new album Tall People Have No Feelings so I figured I’d join the fun by starting this out with something more predictable and typical in music-journalism. The facts remain the facts when it comes to the music of The Vanilla Milkshakes – these guys stay completely true to the style of music they love and on this particular album, have also enlisted some of the assistance that have been at the helm of some of their own favourite albums to bring out the best in these garage-rocking grungers.

For instance… Tall People Have No Feelings was recorded by Beat Happening’s Calvin Johnson – a veteran of the grunge-era, expertly-mixed by Pual Krogh and mastered by Jack Endino, a man forever-famous for delivering the first-recorded sounds of Nirvana back when they very first started out. These studio-talents are more than just hired music-goons…not only do they know their shit – they’ve lived lives immersed in sounds incredibly similar to what The Vanilla Milkshakes make…these are the right people for the job entirely.

And as it would seem, once again, the band has chosen to create mayhem and wreak-havoc over the course of the album. Ranging from what sounds like tired, bored & lazy to the sarcastically-energetic and amped-up Rx-rock, The Vanilla Milkshakes are the musical equivalent of receiving the sour taste of a grapefruit when asking for the sweetness of an orange. In other words…this album is bitter – and it starts with its jaded attitude and anti-enthusiasm immediately with “Amazing Misery.” Rad guitar-grind in this cut…and I totally dig the middle verse…which isn’t really so much of a verse I suppose…it’s more like good conversation – but it works.

I do almost find it strange that all-parties concerned somehow put “The Block Song” as the second-cut on the record. Endino? That you? I only mention this because of its inarguable comparison to Nirvana’s “Sliver” – which was incidentally second on their album Incesticide, which Endino also had a hand in… “The Block Song” comes really close to “Grandma take me home” on the chorus delivery and the overall song has the same bizarre & rubbery vibe to it. The comparisons to the Nirvana happen often to The Vanilla Milkshakes in print…I’m just trying to figure out if they’re purposely seeking it with their choice of placement and ideas on “The Block Song.”

Lead-vocalist David McGhee catches a much more authentic melody on the following cut, “Deez Boots.” Solid execution on this track…it’s slightly more-contained in its explosiveness than you typically expect from the band for the most part, well, until McGhee leads them screaming into the chorus anyhow… Great ideas all come together solidly on “Deez Boots” – there’s effective melody that combines grunge with the starlight-sparkle of 1950’s music…and whether they’d want to admit it or not, they’re singing this one pretty fantastically and powerfully. Even as it sprawls out and completely breaks down by the end…the melody and impact of the hook remain. Solid tune.

And then WTF is THIS? “Good Intentions Will Kill Us” sounds immediately like the song I’ve been waiting for from The Vanilla Milkshakes. The drums from Frank Registrato are exceptional and provide the solid backbone driving the track forward as it plays, weaving in some absolutely wicked ideas in throughout the verse. I’ve run into a few tracks lately where the verse outshines the chorus…and I’d put this in that category. I don’t hate the chorus, it works, but it’s not as powerful as the verse is…”Good Intentions Will Kill Us” is Weezer’s “The Sweater Song” on the purest of crack. Guitars, bass, vocals…you name it – everything in this track has at least a highlight moment or two and its slight departure from their overall sound & style is one that works extremely well for them here on this bizarre but wonderful song.

Dig the bass in “If You Think About It,” but I was kinda pissed on this one when McGhee lets loose for only a second right at the moment where you think the energy of this rhythm & groove will explode through the rafters. Musically blue-ballin’ us, he approaches the final moments with a more controlled melody rather than starts to rip us a new sonic a-hole. In a way, I’m almost surprised with the amount of love they’ve got for Nirvana and bands of the grunge era that McGhee isn’t looking for the scream to add a lot more throughout…a song like “Kitty Likes Coffee” is an example of where I thought the ‘extra gear’ might have come out…sometimes there’s a bit too much of the same tone expressing the same words if that makes any sense… Regardless of how the words are sung…the lyrics in “Kitty Likes Coffee” are some of my favorites from The Vanilla Milkshakes – their sarcastic approach to music overall is on full-display here, and the melody is in-check throughout. I just expected them to scream a little more or ramp that energy up throughout the progression…that’s on me, not on them.

“Popular” is another song that drifts dangerously close to the roots of their influences…almost like some people would assume there’s a sample of the guitars from “About A Girl” within the song itself. But again, the other-side of this coin entirely…is to look at it from the angle of ‘fuck yeah, being compared to Nirvana is rad as hell.’ Cause honestly, it is. I’d have given BOTH my left & right nut at several points in my life just to hear anything like that once about anything I’d ever write or play in music.

“Sara Tea” and “Sorry Desi” bring back the pop-aspect to the melody and distorted mayhem of The Vanilla Milkshakes…I dig the grip they have on being able to combine harmonies and vocal melodies that sound like they’re from a completely different era than the grunge they’re rocking. The combination works well for them…and I think that’s reflected in both “Sara Tea” and “Sorry Desi” for the quality in the hooks and how much they contain a crossover appeal that could potentially pull in a few more ears from any direction from pop to rock.

Tall People Have No Feelings is commendable for its commitment to the overall vision of The Vanilla Milkshakes want to sound. You can accuse them of being lazy, bored, tired, off or on…what you’re hearing is intentional and what I’d presume they’d be proud of sounding like – they should be. “The Pessimist” is proof of the growth in this band…that’s a hell of a job in the writing and sincere intent driving the sweetness in the lyrics…another highlight on this album for me for sure.  McGhee seems to add a personal touch to the energy & emotion of the lyrics in this tune that give it a vibe unlike the rest…one I dig on for sure.

As a music-journalist…an indie-one at that…it makes me damn proud to hear a song like “We Sound Shitty So Spin Will Like Us” – that’s just fuckin brilliant and a great line to write a song around. Purposely repetitive and pointing out every aspect of what the song IS as it plays…this is truly a clever song despite their every effort to ‘shitty’ this one up. And I’ll be damned if I don’t agree – that’s definitely good judgement on their part and an accurate representation of the music Spin seems to seek out these days. WTF happened Spin? Honestly…you guys used to be cool…now you are truly Rolling-fucking-Stone…and apparently it’s not just me that feels this way – thanks The Vanilla Milkshakes for expressing in music what I’ve felt all along!

“Yr Scene” is a fairly jazzy little ditty for this grunge band isn’t it? NO WAY…The Vanilla Milkshakes have been rolling pretty hot throughout this album…”Yr Scene” continues to project the attitude & energy and overall craziness that drives the band, but really switches up the sound to a truly inventive, bass-led groove that is both tiny and awesome. It gives the album a little lightening-up before it churns-out its final brutal grunge-grind in “You’re The Starbucks Of People.” This ending RULES…a true highlight of the chaotic-nature of the band and how they combine that with authentic melody…great backing vocals…great drums…but I gotta admit, it’s the line itself and the delivery of the way McGhee attacks with confidence and venom shouting “You’re The Starbucks Of People” that really sends the blood flowing to my music-vein. Dude’s a smart lyricist.

Don’t let the looseness of the style of this band fool you…they’re a lot more precise than anyone would ever give them credit in both the music and words. The Vanilla Milkshakes have definitely put out an entertaining set of tunes on Tall People Have No Feelings and even though I might bug these guys extra because they’re natural jokesters…they’re also impressively improving and the proof is on this record. While there were moments where I felt like the songs might benefit from a second-gear…in a sense that same desire is largely satisfied by the layout of Tall People Have No Feelings which itself continues to pile on more madness, more melody and more mayhem from its beginning to its end, building in quality and strength as it plays.

So I guess what I’m saying is ‘SUCK IT THE VANILLA MILKSHAKES’ – seems like I dig what you’ve done here on Tall People Have No Feelings after all – rad job guys.

Find out more for yourself about The Vanilla Milkshakes right here at their FB page: https://www.facebook.com/thevanillamilkshakes