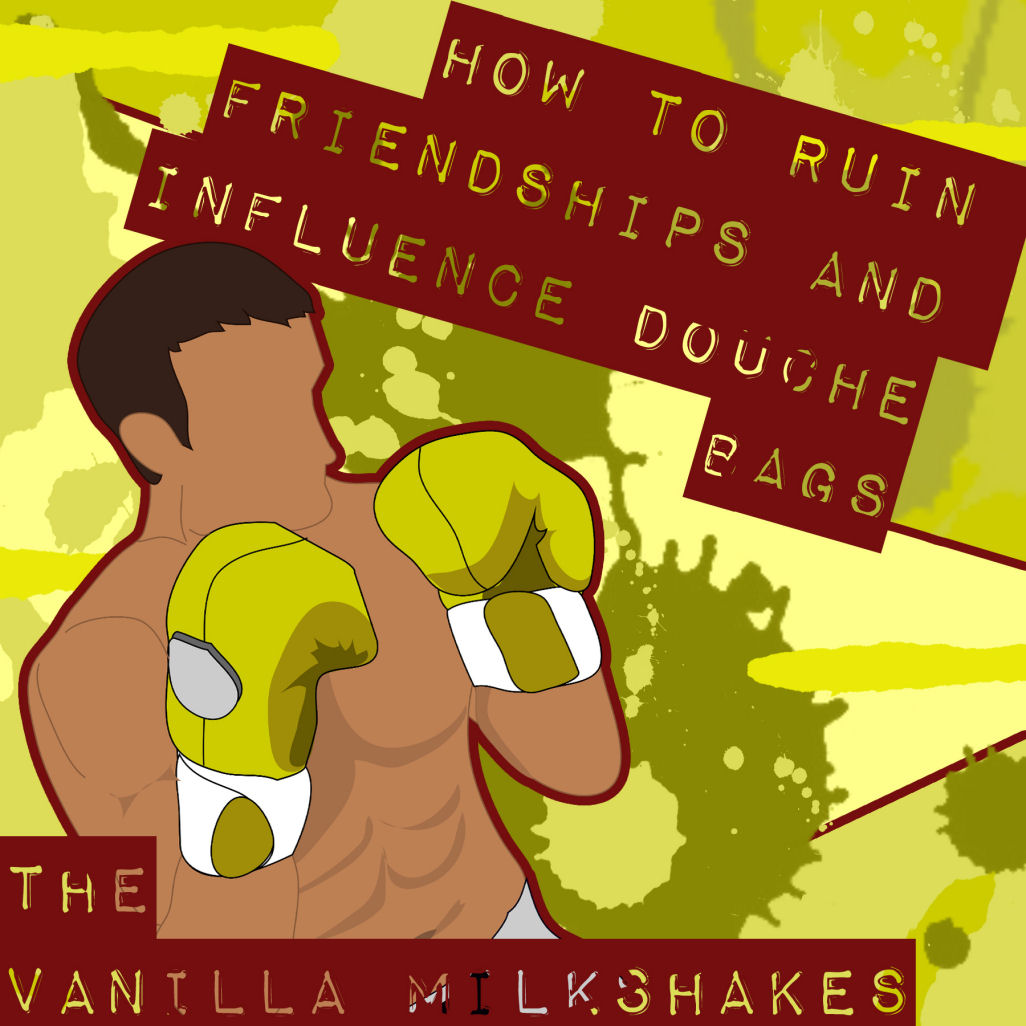 Denver, Colorado…is this what you sound like these days? Well. Right-fuckin-on! Raw, energetic and full of grungy-hooks – The Vanilla Milkshakes have assembled a full album rooted in the old-school of the 90’s and boy did they stumble onto EXACTLY the right bearded gnome (Me – I think we all know this by now?) to review their latest album How To Ruin Friendships And Influence Douche Bags.

If you have a look at The Vanilla Milkshakes listed influences on the Facebook page, you’ll find listed…probably one of the most accurate lists that I’ve ever personally seen of bands in correspondence to their blend of sound. I would have certainly cited bands like Mudhoney, Green Day, The Offspring…all of which you’ll find there in their list; and also, much to the credit of the song-writing you’ll find in The Vanilla Milkshakes…I would have completely been brave enough to reference Nirvana, also listed in their influences. I might have personally added like…maybe The Archers Of Loaf…maybe some Meat Puppets…but look at that, good-lord almighty not only do I like the entire list basically, but The Vanilla Milkshakes are also cool enough to list IN THE WHALE in their influences? That just fuckin rules guys – love that band!

Okay…enough of the ramble…let’s talk some specifics. First of all…think of what you’ve come to associate with Seattle’s music and just remember this three-piece comes from Denver. “After School Special” starts out with an energetic riff-led track that rolls smooth before it explodes into a true Nirvana-esque chorus. I found that a lot throughout the album…this great blend of Green Day playfulness and Nirvana rage… It’s punk, it’s rock; and like both of those two giants before them, they mastered the skill of squeezing in pop sentiments under the scales and skin of their raw sound. I mean…this is sped up…but you can hear real elements of classic bands like The Ramones and The Knack in here too, both of which of course influenced Nirvana as well back in the day.

As a three-piece…reinventing the wheel isn’t always going to be an easy achievement; but The Vanilla Milkshakes aren’t so much trying to reinvent it as they are trying to re-install one. They clearly make the music they like to make; it’s something you can easily hear in any of these anthems. That being said…I love you guys already for your rawness & realness…but let me just say…the whole ‘chicken & the egg’ thing needs to go in “At Odds With God;” it’s as grating to me as the idea of someone counting out numbers in song as lyrics.

But let’s get REAL here for a second…I was probably then and might still be now, one of the biggest Nirvana fans known to mankind. And even still…I didn’t LOVE every one of their tracks either. “At Odds With God,” reminds me of a sped-up “Lithium,” (a song I loved for how serious it took its pop-characteristics) through its opening guitar-riff, and then by the whole chicken/vs. egg debate it reminded me of something like “Molly’s Lips” (Which I was never all-so-hot on). In saying that, I should also note however, that lead singer David McGhee is losing his mind on the vocals throughout this, and, well, most of the album…but I love his wreckless-attack & gritty-approach.

“I’m No Prize Myself” walks a fine line of being a little too melodically close to “Westbound Sign” by Green Day, but no comparison really when it comes to the overall assembly of these songs and how different they are from each other. “I’m No Prize Myself” does end up showing a more melodic element to what The Vanilla Milkshakes can do, and they carry that onto the following track “Idiot Colorado.” You can call it close to a Blink 182-meets-Weezer feeling & tone here, you can call it whatever you like but this track is excellent through and through. With a perfectly placed bored-element to the vocals; they don’t come out flat – it’s completely the opposite here. Even though McGhee dials back the rage here for the most part, the attitude comes out more clear than ever. Standout work from bassist JanKarl Hayes on this cut.

“Tall Boy/Ska Boy” is an interesting track for a couple reasons. One being that it sure made me appreciate just how much control people like McGhee and Cobain have in their vocals…and how like they all sat in the front of a year-long class taught by Pavement’s Stephen Malkmus who only taught them the lesson of use your true-talents sparingly; and just go kick-ass for the rest. McGhee could sing these songs more straight-ahead for sure – he’s choosing reckless-abandon, real and raw over a clear & clean tone. In fact, the next song “You’re Not Cool,” might just reference some of those aspects of his approach; if you listen closely you might even catch him actually laughing about it. Those that ‘get’ this style of music and are comfortable with the truly-live sound that existed on records on those old Sub-Pop gems…there’s nothing not to love here on this album.

Kind of fitting that the next melody I felt familiar to me came from a resident of the actual city of “Seattle.” Reminded me a little of a piece of “Such Great Heights” in the chorus, but again, incomparable in style and sound overall…definitely two different sounds there. This track is the kind of song you kind of expect from the punk circuit…but again, McGhee just gets to lose his mind somewhere just after the two and a half minute mark…and that’s always a pleasure to listen to whenever he lets it rip in full. Lyrically…you gotta love the very last line at the end of this song; perfect.

“Kreep” has an excellent Offspring feel to the opening…definitely around the Smash-era…these three guys have gotta be 80’s kids like me growing up through the 90’s. A little too-close on the Blink-182 melody of “Adam’s Song,” vocally once-again…but you can feel free to sign me up for the rawness of McGhee’s approach. At least I think it’s “Adam’s Song,” that I’m thinking of…I liked that track and maybe a handful of others that wouldn’t add up to a full half-hour, so again, consider me likely to fall on the side of something much more real like we’ve got here in The Vanilla Milkshakes.

McGhee brings a Mark Arm-ish like tenderness to “Dance Robot Dance!” – I dig this track quite a bit I must say. Around the two minute mark, McGhee slips into a pretty odorous tone for thirty seconds that I can’t get behind, but the rest of that quickly-delivered melody was delivered with some real punch. They storm into a Bleach-era Nirvana mindset and sound on the second to last track on “The One That Goes” which has a chant-style verse akin to “Scoff” and Kurt’s shout of “Give me back my alcohol!” It has a similar intensity to back it up just pre-chorus as they launch into an amped-up pop sound like a psychedelic Beach Boys trip. From 2:30 to the end of the track at 3:00…you will absolutely find McGhee at his throat ripping best. Perfect vocals from him here.

It’s funny…just realized as “I Need A Dollar” was playing on, that I haven’t mentioned the key-drums of Frank Registrato…this guy has been a beast on every track…well, except for this final track, he’s completely slacking here.

Spoiler alert – there’s no drummer on this final acoustic tenderized moment from The Vanilla Milkshakes…I just felt bad for Frank kicking all that ass back there and me not making a mention of it…he’s really been spot on the entire time and been the backbone driving the beat on this album. Frank, buddy, you…you’re the unsung hero of what keeps this music together and with the energy it has. Not that I’m taking away from “I Need A Dollar;” it’s a great way for these guys to have ended How To Ruin Friendships And Influence Douchebags by taking it all the way down here for this personal little moment. McGhee drops some useful life-hints and knowledge-nuggets here…just in case there was a few things you didn’t get about….ummm….LIFE and how to live it.

Overall, this is an excellent start for The Vanilla Milkshakes and I’m excited to hear what else they might come up with in the future. It brings me right back to that time I personally loved so much when music was free of restriction and the freak was suddenly king. Sure, it could have a more-polished sound for us to listen to…and if they did that, they would have zapped their own magic into oblivion. No – every note hit, missed, on or off represents music being made by people that love both listening to it AND playing it with everything they’ve got; music made by people with an intense love and respect for the grunge-era.

Last thirty seconds of “The One That Goes…” I know I’ve mentioned it…and YEAH, here I am doing it again. I could listen to that moment all day long.

Find out more for yourself about The Vanilla Milkshakes right here at their FB page: https://www.facebook.com/thevanillamilkshakes

Tags: Album How To Ruin Friendships And Influence Douchebags sleepingbagstudios The Vanilla Milkshakes