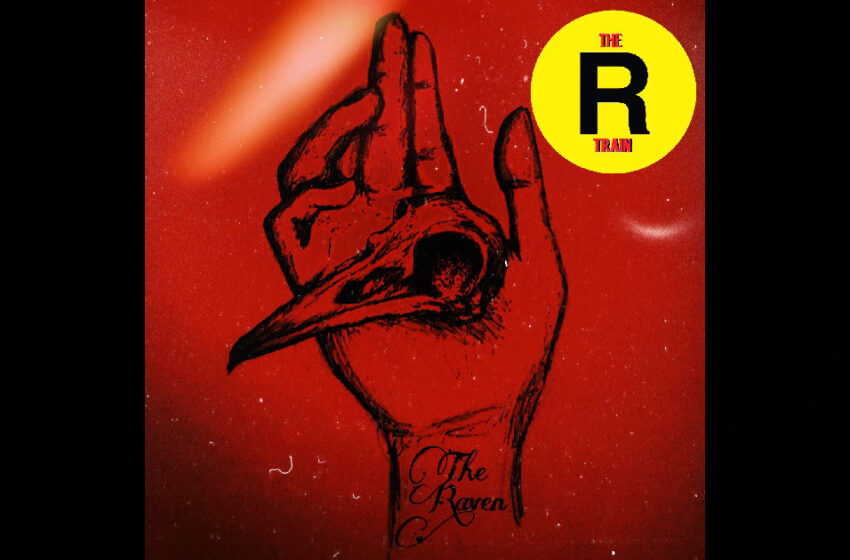 That’s a hmmm built partly of confusion and partly of interest…the latest single by The R Train Band was a little more perplexing than the last time I’d heard their music with their cover of “We Gotta Get Out Of This Place” by The Animals back in March earlier this year.  I don’t think that I’d go as far as to say “The Raven” has the guys necessarily taking a step backwards so much as trying a few new things.  YOU have tried new things before too in your life, in whatever it is that you do…and now think about how that’s gone for ya.  Lemme guess…some things turned out good, some turned out great, and some maybe not so much of either…but chances are, regardless of how attempting something different can lead to more varied results, our lives are enriched by spreading our wings like The R Train Band does on “The Raven.”

So here’s what I can tell ya…a couple of things that worked for me, a couple that didn’t as much, and one piece of information that you’ve probably already assumed from the title of this tune.  I don’t think there’s ever going to be a time in human history where we see a title of anything with “The Raven” and don’t end up thinking about Edgar Allan Poe, because the two have become practically synonymous over time.  And so, yes – not only were you already thinking that this could be the case, it is indeed – the new single from The R Train Band is inspired by the legendary author & poem that we all know so well.  That being said, the even better news is that it’s a case of art inspiring art…it’s not like The R Train Band set out to make a rock song from the poem directly, “The Raven” draws references to it in the song and in the video as well, but at the end of the day, they’ve created something original for ya.  Which is the better way to go about it in my opinion…I probably love Poe’s work as much as any fan of his stories do – but by that same token, we’ve all heard the poem of “The Raven” so many times that we can all cite pieces of it just by thinking about it & recalling it from the recesses of our memory.  And you regular readers know I’m all for art inspiring art in other forms like this…that’s how you really pay your respect to something out there.  A cover is a compliment of sorts, but much more of a self-serving one…to create something original FROM something that exists…to me, that’s the real compliment, because it’s clear that more thought has to go into making it, and chances are, that all traces back to real passion for the material at the root of it all.  As in, it’s pretty safe to say that at least a member or two in The R Train Band digs Poe’s legendary writing too.

The question becomes – does it WORK though?  Honestly, the jury is out on that one still.  Here are the facts, Jack…the masses resist LEARNING at damn near every opportunity and possibility to do so.  Disagree?  Feel free to @me on that if you like, and we’ll have a good ol’ conversation about it, but you’re also welcome to feel how you feel.  Chances are, if you find yourself thinking that’s wrong to have said or that I’m judging the masses out there too harshly…I hate to say it, but you’re probably not the kind of person I’m including in that assessment – you probably read, you probably listen, you probably learn – and right on for doing all those things that most people DON’T these days.  So while it’s cool to someone like me to draw on “The Raven” and Poe’s source material…honestly I couldn’t tell ya if that’s going to be an asset or a liability in today’s world…I suspect it’ll appeal directly to some folks out there, but any time that’s the case, you can consider that a ‘niche’ audience to a degree.  According to the band’s official posting with the video, “The Raven” is more of an exploration as to “how grief can overcome a person’s ability to live in the present and engage with society.”  Which makes part of me wonder whether or not that might appeal to a larger audience than the noticeable tie-ins to Poe, which might dare listeners to educate themselves a little bit…which again, they tend to resist.  When there are so many catchy tunes out there to turn up & sing along with, anything educational is threatened, 100%.

In that respect & a few others, I think The R Train Band is in for a bit of an uphill battle this time around.  The musicianship is solid & steady as we know it to be, and remains to be a solid positive in “The Raven.”  I also think they’ve got themselves an engaging video that is uniquely different from a lot of what you see out there…and that of course can go a long way…so that’s another advantage they’ve got in this tune.  When it comes to the hooks…I think that’s the main issue – I wouldn’t say this song is entirely devoid of them, but they’re going to definitely fall into the camp of less accessible than perhaps they’d like to acknowledge.  To me, the biggest hook they’ve got in “The Raven” actually comes in the first line of the verses, each and every time…it’s a hard to argue that’s the place we expect to find’em, or wanna.  I have also defended the use of autotune in about a million ways on these pages of ours throughout the years…but it’s gotta be used in the right way that enhances the experience…and I’m not convinced that’s the case here on “The Raven” if I’m being truthful with ya.  It was somewhat surprising to find if you ask me…they proved to have vocals that really worked au naturel in their cover of “We’ve Gotta Get Out Of This Place” the last time I was listening to The R Train Band…so it seemed like the additional use of autotune on this new single might be a step too far, or an unnecessary one for them to take.  Trial and error is all we can ever do as artists though y’all…sometimes it works out perfectly, sometimes it doesn’t – but in both situations & scenarios, hopefully we learn something about what we’re capable of.

While I would still say that I enjoyed “The Raven” enough on a personal level…I would also say that this particular song is still missing that single-worthy spark to it…that might be what’s throwing me off the most, or giving me a harder time concluding that the masses will be into it.  I’m hearing a song that would likely provide strength to a lineup on a record at some point…but I’m less sure of it as a stand-alone single & its potential to draw people in to listen to more from The R Train Band, which is kind of what ya want in the release of a single.  In that respect, I think the video probably has a better chance of catching the interest of viewers out there…which could lead them into listening further…that’s the hope I suppose.  Anyhow.  I’m just one dude with an opinion, I’m not the end-all be-all, and I’m not the kind of person that would even try to convince ya anything I say ever matters.  If you like “The Raven” then right on – quoth the Jer @ SBS “nevermore!”  If you don’t, you don’t…The R Train Band will survive, I promise.

“The Raven” gets its release tomorrow online – until then, find out more about The R Train band at their official website at:  https://thertrain.com