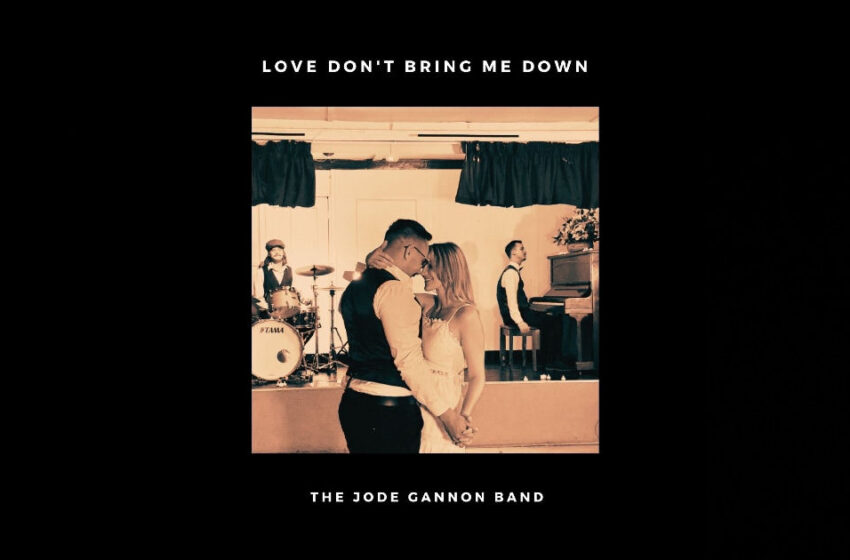 What a debut year this dude/band has had!  I tell ya…if this site of ours had its wits about it and recognized singles just as much as we tend to focus on EPs & albums, you’d probably have found The Jode Gannon Band would have had two entries into this year’s best.  Maybe even three – it’s tough to say…there’s a single in between when I first heard & reviewed their song “Sunken Ships” that’s called “Travellin’ Man” that I’ve checked out as well…decent tune, but not quite as suited to my own personal taste so much as that initial cut and this new one here.  I would have told ya “Travellin’ Man” is a quality song, because it IS, don’t get me wrong – but I suppose it’s in a bit more of a straight-ahead gear in comparison to the undeniable magic that you’ll find on display in the two singles that are surrounding it.

Because I’ll tell ya folks…I barely needed a single minute or full spin through “Love Don’t Bring Me Down” to know full-well that I was loving everything I was hearing.  Considering how many amazing things I had to say about “Sunken Ships” earlier on this year and how much I still dig that song to this very day…to think that The Jode Gannon Band seemed to be somehow exceeding any of the wildest hopes and expectations I could have possibly had with this brand-new tune…I mean…that’s really something y’all – I was genuinely surprised by that.  Do I like it more than “Sunken Ships?”  Honestly – I think that I do…and that’s almost equally surprising…even as I write it right now…that was one heck of a tune, and to realize that The Jode Gannon Band was capable of outdoing themselves in that regard…

…well…I suppose you get the picture.  The Jode Gannon Band is having a groundbreaking year and giving themselves every reason to want to continue.  For real – if you were capable of making music like this band does, you would, full-stop.  It has been a while since we last had them on these pages of ours with that debut single back in April earlier this year…but with another song in between, I’d say the production & creative output is rollin’ along at a decent clip.  I’ll say this though too – if the quality you hear in the writing, performance, and production that we hear on “Love Don’t Bring Me Down” takes time to come together…there’s a reason.  Music like this is not only worth waiting FOR, it’s also worth every single moment that you spend with it; that’s true of them writing and recording it, and that’s equally true of listening to it in the final results – this is another outstanding single for The Jode Gannon Band, 100%.

While I had a few contortions of comparison to make in regards to “Sunken Ships” – this time around, with “Love Don’t Bring Me Down,” I felt like the similarities were so strong between The Jode Gannon Band to the music of David Gray, that no other comparison would have come close to what I hear in this new song.  And THAT my friend…should carry this whole project a very long way.  Fun fact for y’all – I actually proposed to my wife on a night where we were supposed to see David Gray play live – we never did see the guy play, we were too busy being wrapped up in the specialness of the moment to think about anything else at that point – but the man basically sold out the biggest venue in Vancouver, BC, that night, and it should still tell ya a ton about the incredible attachment I have to a sound like Gray has.  So to find a little more of that kind of sweet magic in music in this world via The Jode Gannon Band here, is more than welcome to say the least.  “Love Don’t Bring Me Down” might not always be the happiest track you’re gonna hear, perhaps…at least at points along the way lyrically, and as a result of the tangible melancholy in the melody that seems to guide this song along, weary spirited in its own way as Jode sings it.  It’s almost like a plea to somehow steer clear and avoid the sadness of that can come with love, and embrace what makes it amazing, cherish what it contributes to who we are, and celebrate the time we have together.  I’m sayin’ that, while “Love Don’t Bring Me Down” will take you through an evocative journey that’s powerfully moving on both ends of the spectrum from sad to happy, it never seems like a tale without hope.  You could argue that it’s actually hope FILLED and hopeful when it comes right down to it…you ride through the twists & turns of this song to get to its most beautiful & powerful moments and the heart of its theme.  Jode sounds fantastic…the piano is perfect…the gentle guitars, bass, and drums are all brilliantly controlled & stunningly professional…and the…hmmm…I’m going with violin…I suppose it could be a cello, or maybe it’s both – but you’ll know what I’m talkin’ about when you hear it – it’s essential to this tune.  Think I’m going cello now that I’ve written that out…but I’ll leave it there for ya.  Anyhow – the point is, you’ll find an exquisite mix of instrumentation that both boldly supports and complements what Jode’s capable of on the mic…and you can hear how the inspiration continually takes hold of him along the way, resulting in an absolutely immaculate finale & final minute to this new single that puts in a remarkable conclusion to “Love Don’t Bring Me Down.”

I’m absolutely stoked about all that I’ve heard from The Jode Gannon Band this year – and I can only imagine that this next one to come, is somehow going to be even better for this crew…I genuinely believe we’re just scratching the very surface of the magic they’re discovering & capable of.  There’s tangibly special sound at work in The Jode Gannon Band, and it’s just gonna keep gettin’ better as time goes on.  Considering how amazing it already IS, the potential for a band like this, is completely limitless.

Find out more about The Jode Gannon Band at Facebook here:  https://www.facebook.com/jodegannonband