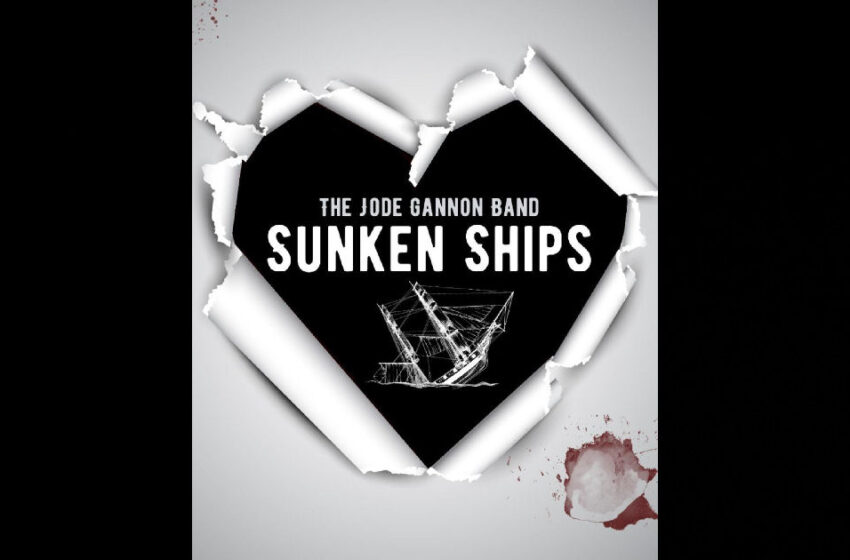 The first thought that crossed my mind in comparison to the sound of what I was hearing in The Jode Gannon Band’s new single “Sunken Ships” seemed to automatically jump to a conclusion of something like, if the Cold War Kids & The Fray got together, and sprinkled a bit of that Mumford magic into the mix to go with it…you’d get something pretty close to the gripping sound of this slice of Alt-Folk/Pop-Rock they’ve latched onto here.  Oddly enough, Belinda Carlisle somehow popped up too if I’m being entirely honest – with the very first three lines of this song that echo the pattern in the main hooks of “Heaven Is A Place On Earth” at a slower pace before eventually deviating into something altogether new…I ain’t gonna lie, for a second there at the very start of listening, this band had me a little worried about what I’d be in-store for, though I certainly liked the sound of everything I was hearing right away.

Anyhow…comparisons are a fickle thing to begin with and I usually just try to avoid makin’em for the most part…it’s really quite rare to find an exact carbon copy of anything out there, as much as that still tends to be a significant complaint made regularly throughout the years.  The Jode Gannon Band are working on a hybrid sound of their own and it’s only natural that, like so many of us drawing from the roots of our influences & interests, that we have the occasional moment show up that reminds us of something else.  I mean, if you wanna get super-meta about this kinda stuff, I could tell ya that a song like “Sunken Ships” possesses the rebellious spirit & emotion of something like Frightened Rabbit with a more refined sound, or how a track like “Sunken Ships” even has that Springsteen-esque edge to the design of the songwriting & melody, or how the endearing & inspiring vibes you’ll find are akin to a band like Sun.Set.Ships. from the good ol’ independent scene as well – we always tend to catch fragments that remind us of something when we listen to music, but as long as it’s never too much of any ONE thing, believe me, it’s still your OWN thing.  They’ve got themselves an extremely well-written, bold, and impeccably executed new single with “Sunken Ships” that is pretty much a surefire hit to be had with listeners out there around the world, The Jode Gannon Band is rockin’ gently with highly relevant sound.

Waxing metaphorically on life, love, and relationships crashing into the rocks, all told through a hazy perspective induced by the bottle as the song begins, “Sunken Ships” gives you the magic of music through the art of the reveal and a supreme balance of strengths within their band.  For a four-minute long tune, you’ll almost feel like you get two completely separate chapters here; you get a two-minute ride through a slow-burning emotional intensity and poetic lyricism that piques your interest…and as you cruise past that two-minute mark, you’ll hear The Jode Gannon Band blossom into full bloom as the song expands & bursts open into its most radiant & melodically-charged second-half.  There’s real power in the way they’ve written this tune…like, that surge they put into the middle is a truly epic moment – after the first two-minutes have ticked by, it’s like the fog continues to clear – and by the time we hit that switch, The Jode Gannon Band doesn’t just sound confident when they make this transition – they sound like they could conquer the world five-times over.  Vocally, they’ve got serious aces up front on the mic…and musically, they’re truly just as strong through the remarkable sound of keys providing the atmospheric elements that sparkle & glow throughout the beginning, the thunderous drums that incite the surge into the second-half with the boldness of the piano-keys springing to life in tandem.  You add in the perfectly placed low-key backing-vocals and how inspired the lead becomes at the main transition – and you can hear how each layer, each piece of this song, has bolstered the best out of another, so on & so on – with every element they add in, the connection you hear between Matty & Jode gets stronger & stronger as they play through “Sunken Ships.”

For a debut single – this is undeniably as good as one gets – and even if it wasn’t, this song would still likely be right up there with the best of the best you’ll hear this year by any measurement or standard you could apply.  They’ve got a pretty amazing story between them…I mean, really we’re pretty much talking about fate to the nth degree if you’re looking at The Jode Gannon Band at a distance – as far as I’ve read, it was a completely random meeting of musical minds over a pint or two, with both main members of the band being from entirely opposite sides of the map, residing in the UK & Australia, respectively.  They’ve both spent over a decade dedicated to their craft professionally…so it’s certainly no accident that you hear things come out as spectacular & sensational as they sound on their debut single “Sunken Ships” – ultimately, that makes sense…but it definitely doesn’t make it any less mind-blowing when you hear the exceptional results that will come pouring outta your speakers.  “Sunken Ships” is an accomplishment…an achievement…a triumph…and all the reasons on earth that a band like this should be encouraged to keep going, knowing full well that they were essentially destined to run into each other that fateful day at the bar long ago, to be here today where they belong, making incredible music.  I am fantastically impressed by what they’ve put together with “Sunken Ships” and know from the sound of what I hear in the way they’ve played this song, that they can feel they’ve discovered something special in the energy between them as well…and when you’ve got a connection like this, you don’t give it up – you follow it wherever it leads.  From the sounds of things on this debut they’ve got – this journey they’re on is just getting started…and they’re going to love where it takes them over these next years to follow if this is the quality of writing, performance, and production we can expect to find – everything about what you’ll hear in “Sunken Ships” reveals a band that deserves a worldwide audience.