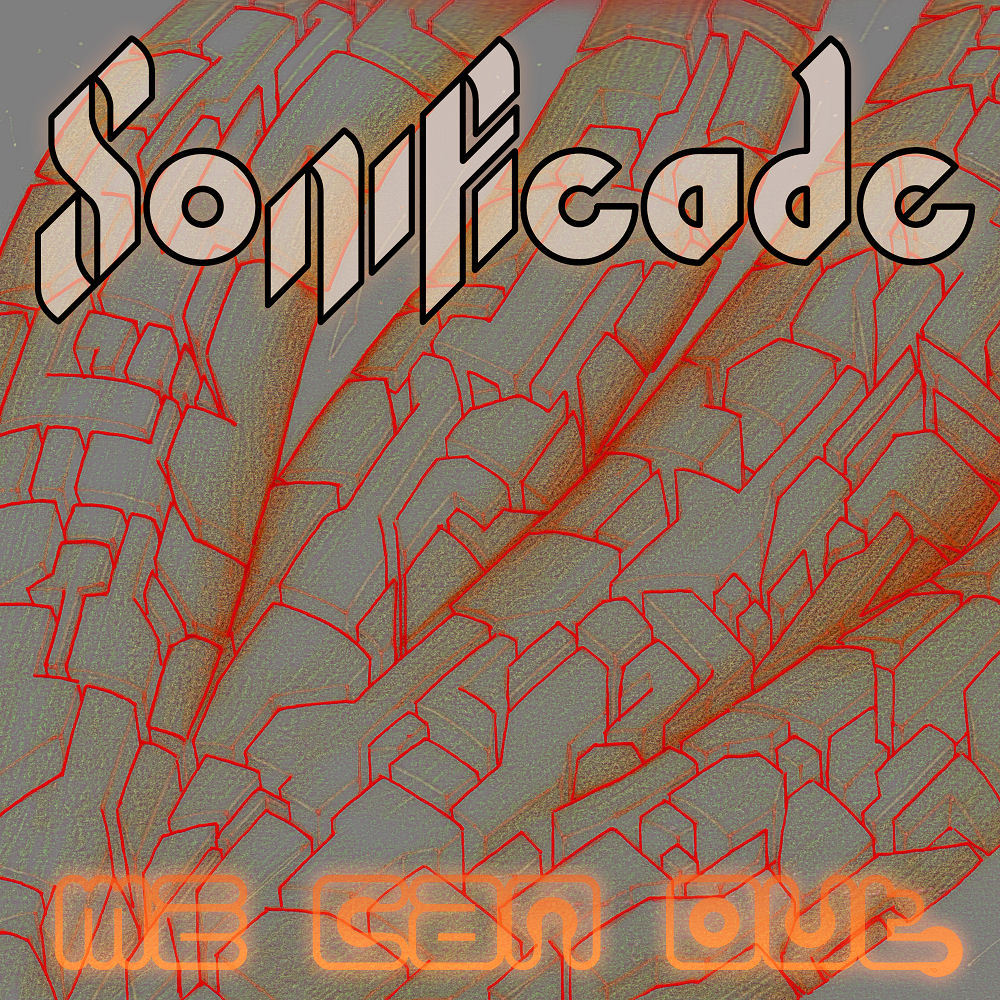 Would you believe it? I barely typed out a word all throughout yesterday…an actual day-off for the first time in quite a while really…but of course, that doesn’t mean the music stops flowing! I stumbled across a bunch of rad new tunes while letting my brain soak them in; all done with great restraint on my part to truly refrain from stroking the keys to create a review on everything I was listening to. But that’s over now…that was yesterday and we’re long into ‘today’ already…it’s time to see if my fingers still work…

One of the records we uncovered was a split-single from Sonificade & good-friends Exposed Edge, each representing the recording with their own original tune, respectively. Both tracks have an even amount of captivating-hooks and each certainly pull their share of the weight when it comes to the equality shared between these tunes – there’s a great balance here.

Sonificade starts out with a solid drum-beat and rumbling bass-line grooving before the additional keys and guitars brighten-up the beginning of “Me Can Out.” In truth…this cut is quite the bizarre little indie-rock ditty really; at times Sonificade sounds like an even further-out variation on what The B-52’s started, or in their pre-chorus, they almost sound like Primus, or perhaps even Oysterhead for a moment…and the verse itself feels dominated by a building, brooding, post-punk-meets-indie-rock atmosphere, which is of course much different from the first two comparisons. Sonificade manages to twist and turn this rock all-over the map on “Me Can Out” – the hooks are strong, the performances and energy all match the intensity and it comes out sounding determined, gritty and mired in an atmospheric layer of fog and shrouded-mystery. Really smart synth-hook, the bass is realer-than-real, the drums pound and the guitars shred through some pretty spectacular tones and textures as they spiral throughout the space in “Me Can Out.” Vocally…not bad by any stretch…I’ll put it this way – I think lead vocals had a tough challenge on this song to outshine the way that the song itself is written. And I think he does a solid job…he comes out stronger with the additional backup vocals and I love the way they sound in the pre-chorus; but I can see/hear that the vocals would be the polarizing issue for many; some will ‘get it’ and others won’t – but that’s what makes the world go ‘round, as they say… Overall, it’s a lot like what I’d imagine The Black Angels might sound like if they were to take on more of a pop-edge in their song-writing…definitely an interesting and attention-holding combination of sonic-textures brought together in “Me Can Out” from Sonificade.

I do think…that of the two-singles, the song with more widespread-appeal probably goes to Exposed Edge…just by a hair or two. The brightness in the melody, the boldness in the approach…really fantastic keyboards and drums shine throughout “Gull Rocks” and the vocals come out confidently overtop of the music as it builds upon itself gently at first before Exposed Edge switches between a more rock-infused folk/indie-sound and the delicate preceding melody. Both songs seem to have a great grip on the flow to the vocals and lyrics…”Gull Rocks” is sweeter in its overall-nature, and just by being so is bound to snag the attention of a few more ears and turn 10% more heads. Great beat & guitar-line to start this tune out as well; and with the inventive and big-sound to the pre-chorus, the way the song changes and the solid musicianship…well…let’s just say it seems to make perfect sense that these two bands support each other and call one another friends. And though both tunes somewhat contrast against the other with their own unique styles – there’s a common bond in the song-writing that seems to make itself clear despite the two radically different overall sounds. Sonificade and Exposed Edge seem to complement each other well while at the same time each bringing their own defining sound to the table on this split-single…they’re bound to experience crossover traffic from each band’s fan-base and set to gain a whole bunch more with the release of this record and the videos to support it. Make sure to check them out – we’ve got’em right below for ya!


Find out more about Sonificade at their official sites at: