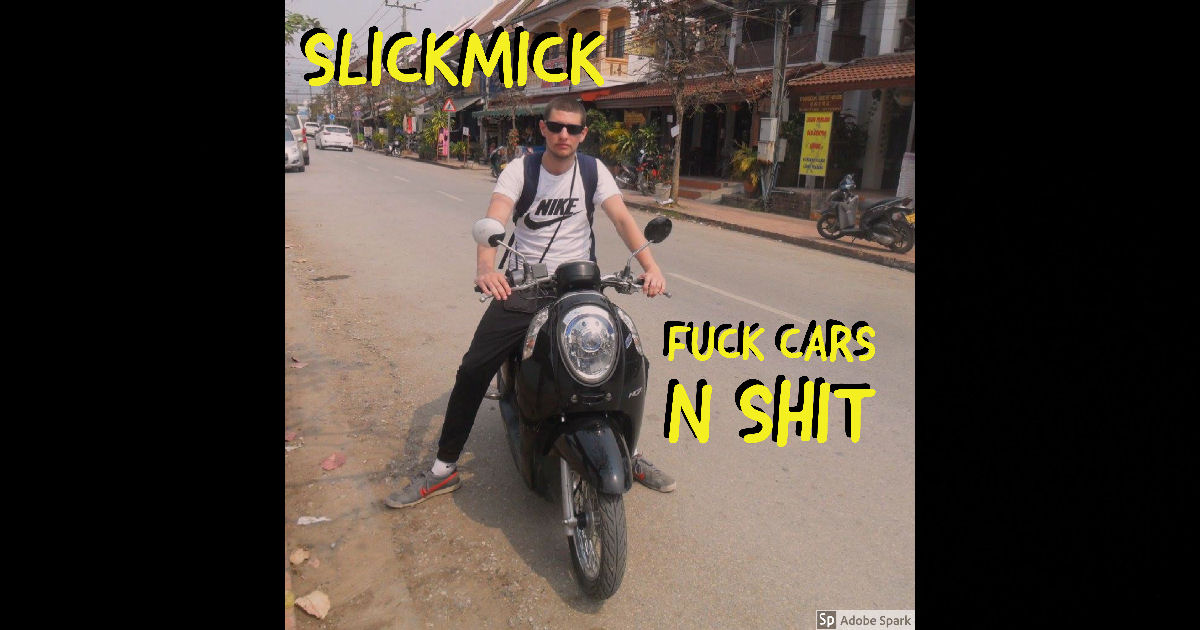 Y’all know the name…we’ve featured this guy up on our pages plenty over the past couple years, though this is the first time I’ve actually reviewed the music as opposed to just post it.  Time to get critical mate!

I get this same message literally every time SlickMick pops into my world, it reads:  “Back in 2016 SlickMick got hit by a car had a bleed on his brain and lost his Memory!!! Check Him Out!!!”  From the past videos we’ve posted of him freestylin’ it up late at night, he’s made it abundantly clear that he’s got no love for cars…which is…well…probably fair enough given the only piece of his story that we know of has him getting hit by one.  Never had a reason to doubt the authenticity behind the story…I, uh…yeah…I mean, I just don’t see anyone else out there spending so much time hatin’ motor vehicles just because they decided that was gonna be a great idea when they got up that morning, you feel me?  So I’m assuming it’s not just a character, but that a car really got on the wrong side of this emcee one fateful day, and it changed the course of his entire life ultimately…and I’d imagine it would be really tough to some extent to be so focused upon or mentally shackled to the one thing he hates the most.

Of course, if there was any doubt, you could simply look at the pictures that come along with a lot of his latest videos…you’ll see the aftermath of SlickMick in the hospital…ain’t no doubt he’s for real.  Dude’s low-fi and underground for sure, but he’s for real.  Since hearing him for the first time back in 2017, the results have varied over the years as he found his way back to the m-i-c…let’s see how these turned out.

“Dance With A Car In Pattaya” started out the set, with SlickMick explaining the Groundhog Day-like experience that he lives now.  He gets real personal on this cut and gives you the backstory on a lot of what he goes through, drifting in & out between where he’s at and where he’s been, recalling details from the accident, how it’s affected him, how it’s affected his family.  We’ve seen this emcee do a lot of live freestylin’ – and there’s always going to be an element of that feeling in the flow of SlickMick to some extent, but on “Dance With A Car In Pattaya,” especially if you’re familiar with his past material, already sounds like a more cohesive & focused effort, perhaps even written down this time for once.  Smart choice of music with the piano-led melody leading the way…gives it that extra tension & drama you’d want with a story like the one he spits, which is essentially the tale of his survival & steps back towards the light.  Subject-wise, it’s classic SlickMick on the mic…perhaps…again, I felt like there’s more detail in his words this time around and he’s not just searching for buzz words or simply yellin’ bout how much he hates cars – that’s definitely on the menu in the lyrics of “Dance With A Car In Pattaya” but it’s not the dominant factor.  Much of this deals with Mick’s mindset and trying to recollect his thoughts as he regains consciousness, taking us inside the experience of what it would be like to be fully blacked out from an accident and try to piece together what in the all-hell has actually gone on when you wake up.  End results dig deep into his psyche and the whole setting feels intensely real for as chilled-out & smooth the beat really is…it all sets him up well…you listen to these words because everything from the music to the microphone genuinely sounds interesting & compelling to hear.  It’s the attention to detail in the imagery & words, the hazy franticness that SlickMick delivers his rhymes with…it all creates an experience you can feel crawl all over ya, literally putting us in his skin and on the inside of his thoughts.

The beat from “Yo I’m Gettin On My Lit Shit” and music are immediately enticing, like for REAL – this is that now sound you’re looking for right here yo.  I think it also brings out a seriously strong set of bars from SlickMick that are decidedly different rhythm & flow-wise from anything I’ve heard from this emcee in the past.  This cut came out towards the end of last year…almost a full year in between when “Dance With A Car In Pattaya” and “Yo I’m Gettin On My Lit Shit” really…and call me crazy, but it sounds like you can hear evolution in this second track.  He’s still the same ol’ SlickMick drinkin’ & smokin’ when it comes right down to it – but you can really hear the man feeling the vibe on this tune, and rightly so.  Most emcees out there would kill to have a cut like this to rap over – and SlickMick makes sure to not take this gift lightly, maximizing this moment for all its worth with a truly inspired performance on the mic.  “Smirk while I pack a cone” – hell ya homie, that’s the way to do it.  Mickster lightens-up on “Yo I’m Gettin On My Lit Shit” and delivers on a huge tune built to be your new smokin’ anthem.  It’s definitely a different kind of beat than I’ve heard him work with in the past and the uplifting vibe that you’ll hear in the music has absolutely got this guy sounding his best so far.  If you’re listening closely to these bars, you’ll hear that SlickMick has completely got the skills to pay the bills with his own signature style, and when he’s at his loosest, most natural & organic like he is here, these rhymes end up fully connecting.  It’s a chilled-out party cut, but make no mistake, it IS a party cut…or at the very least, not reaching into the serious nearly as much as the first track “Dance With A Car In Pattaya” did.  “Yo I’m Gettin On My Lit Shit” is the kind of track you could put on and elevate any Friday night to the next-level.

“Grape Grape Blueberry” has the man rappin’ bout what he’s smokin’ – I got love for that, sure.  He claims to be ‘not your everyday stoner’ – which I think I can also safely verify to be true, even though I’ve never met him.  I’m ‘not your everyday stoner’ either by any stretch of the imagination…I like to think that we can smell our own in this world…SlickMick & I would get along just fine.  He’s probably got the most modern-day design in the stylistic sound of “Grape Grape Blueberry” in terms of what’s out there right now…I’m probably more partial to “Yo I’m Gettin On My Lit Shit” personally, but if you were looking for what the people out there are listening to, “Grape Grape Blueberry” gets a lot closer to what’s in the clubs.  Fully unleashed, SlickMick is livin’ the nightlife to the extreme on this anthem – “Grape Grape Blueberry” gets more wild & explicit than the two cuts before it, yet also shows another gear yet again from the man on the mic…you’ll find each of these four tracks flex a whole different sound from the cut before or the ones that come after…you get a great dose of just how versatile that SlickMick can actually be this time around in this set and it completely makes the difference.  Like, there’s no doubt that I feel like you get to know the guy a whole lot better through these latest singles – I’m sure you’ll feel the same way…dude’s put a ton of work into his rhymes & flow and in making each experience a unique one from the last.  I can definitely imagine people gettin’ down with “Grape Grape Blueberry” for sure…it’s fresh, it’s fun, it’s wild, and it’s got a completely relevant sound for right now.

I think he’s done really well in creating different vibes overall really – especially ones I felt like I wasn’t expecting based on what I’d already heard in the past.  To me, there’s actually no doubt that SlickMick raised the stakes for himself throughout 2018; to be truthful, I was only ever half onboard before as a fan, but I think he’s given us every reason to have faith in the guy after this new set of four tracks.  “Fuck Cars N Hoes” has the Slickster adding in a near Reggae-infused beat into the mix – and once again, the results of having put himself into a different atmosphere & environment brings a whole lot more out of him and his character when it comes time to perform.   I don’t usually go for anything Reggae-influenced, it’s really damn rare for me…but I gotta say, I’ve got zero problems with this.  Could just be that I’m stoked to hear this emcee thriving on the mic as much as he has throughout this set of four latest tunes – I fully expected to have a lot more to say in terms of what could potentially be improved, but he’s taken care of many of the issues from his past material already without me having to say a word.  “Fuck Cars N Hoes” may seem like the title implies a potential throwaway tune or a dip back into the SlickMick catalog we already know – but again, you’ll find he’s upped the stakes from the way he’s rappin’ to the content itself inside the song.  There’s much more substance here than you’d assume.

And so too, is the case with the rapper himself – SlickMick proves he’s getting better & better, stronger & more skilled as time goes on.  After everything he’s been through already…it’s inspiring to hear the dude on the right path and pulling out a solid win on these four songs – plenty left in the tank here.

Find out more about SlickMick through his official page at Facebook here:  https://www.facebook.com/SlickMickTheSlickest