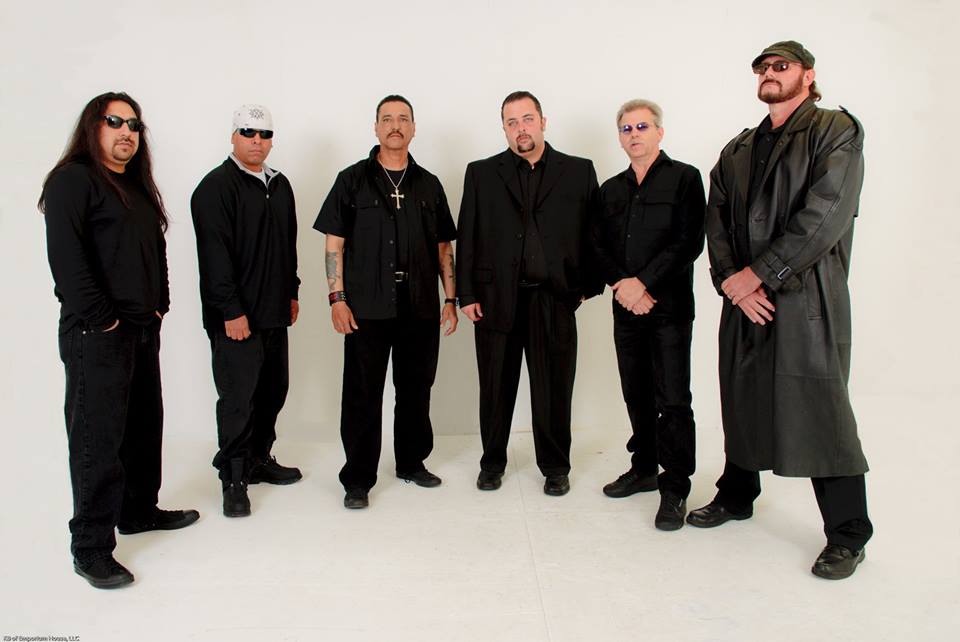 As I mentioned very recently…it’s always an honour to be able to check out music prior to release…I feel like such a bandit; but one that very much appreciates the loot in his mitts – or I suppose in my case, ears. Today we’re checking out five of the tunes from the upcoming album By The Blood by metal band Shining Force – a six-piece band full of extreme sounds based out of Pasadena, TX. At the moment, I’ve got myself a sample of the album set to be released by the end of this year; as in, I’ve got the pre-released unmixed & un-mastered versions of the songs you’ll be hearing – how awesome is that? Believe me when I say, these songs aren’t too far off as they are already; whatever final tweaks are to come to the music of Shining Force would be like trimming off the final hangnail on a perfectly manicured hand.

Now…I suppose I should mention…hmmm…nope…actually I’m going to wait on that bombshell for just a bit here. Let’s just say that at this moment in time I’m withholding a piece of information about the music of Shining Force that might just shock you…but to start into their music I’d rather you went in head-first like I did with no pre-conceived notions about how this all may/may not sound. I mentioned it’s metal…so you know that already…and I’m fine with telling you that there’s clearly the influence of bands like Iron Maiden, artists like Judas Priest & Dio in this music of theirs…you can know that stuff. For now…

“Rapture” starts out my sampling of By The Blood. I don’t know if I’m just getting more used to the amount of metal-music that comes at my ears these days, or if this is truly as good as it seems to be at first! Gotta say though – this was an instantly impressive start; though as a general-sound in metal, you may feel like you’ve been down this particular road of melody before – you still won’t be able to deny just how hard they attack and go after it. I might be absolutely crazy here…and I think the only person that will actually know the answer to this is drummer Ralph Mendez – the guy is beating the skins at a relentless pace with a ton of fills and beats happening…I’m positive there’s two moments in this song, slight as they are, where there’s an extra beat in there he might not have wanted. Keep in mind this is like complaining that there are two solitary grains of sand on an entire beach that are sending the glare of the sun into your eyes. Ralph truly does an incredible job on the drums throughout…I’ve actually had to listen to “Rapture” several times just to be confident enough to say I think I’m hearing what I’m really hearing and I don’t think many would even catch it at all…that is, supposing I’m not crazy and this is really happening in the song of course. Point being, it’s more than minimal enough to overlook and certainly not the defining moments of this ripping first song where drums pound, guitars shred and Randy Dickey grows more confident on the microphone with each passing second, beat & bar. Though for the record…this is not the typical style of singing I gravitate towards (traditional metal vox) – Randy has more than sold me on his sound, style and ability. All I needed were the moments that occur at 1:45 and 2:48 respectively; LISTEN to the way he goes after these moments in time with incredible passion & emotion laced into that scream! I love the sound…I love how perfect in tone it all is, yet how raw & real it felt…this is the kind of moment that I can only hope stays preserved when under the microscopic scrutiny of the studio engineers & producers. In any event, the two guitar players – Billy Vaughn & Richard Navarro, along with their cohort on bass David Lentz, keep this song ripping along the beat and start out this adventure into Shining Force with a solid burst of metallic-energy.

If anything…after several listens through the set of five songs I have – I felt like “Demon Fighter” needed a little more low-end presence from Ralph in there. This song deserves a bigness to it, and I think the best thing Shining Force could do for this particular song would be to bring around the bass into the mix a little more in those first two-and-a-half minutes. For some odd reason, it all sounded stronger towards the end of this song as the guitar solos shredded, and then thinner again during the chorus…

…and then it hit me…it’s backwards! I mean…it’s not like their spinning their song backwards to reveal hidden messages or anything like that…that’s not what I mean. What I mean is that this song seems to have a verse that sticks out more than the chorus does at the moment…and I’m not so sure that’s gonna be fair to this chorus if it were to stay that way in the final mix, it’s a strong one. I’ve run into this trap several times myself as a recording artist…sometimes those verses come out so right, so tight & so perfect that it seems anything you do or anywhere you might go from there ends up being a slight step down or reversed in energy from the moments before. Dave Grohl came up with the perfect solution: write a chorus…change that into your verse…and then go back and write yourself an even BIGGER chorus. Must be nice to just have it all come to ya like that…but that’s not the case for us all. I like everything about “Demon Fighter” and I think that the end result of the final mix will tell the real tale; I’m certain they’d agree with the assessment here on the song and I bet ya they find a way to bring it all up and maximize that chorus to really swing the dynamics of this song for the better.

Title-track “By The Blood” really shows just how hard these guys can get, and how deep & dark their melodies can go. Seems like they’ve had a slight synth-line that has been helping out fill the sound on these songs as well…I think it’s been a great idea in there each time, it’s slight but effective. “By The Blood” pounds and pounds and pounds away with excellent rhythms and solos from the guitars and an onslaught of beats from the drums surrounding Randy’s rising vocals. It’s a worthy title-track if you ask me…it’s not a typical song by any means…not a lot of these have been; I appreciate something new to listen to within this familiar influence, atmosphere and style.

But here’s the truth…it’s actually ALL extremely new to me personally. Are you familiar with the names Reliant K or Jars of Clay? How about DC Talk? If you are…chances are you’re a person of religiously-based faith who have stumbled upon the handful of faith-based acts out there worth their weight in salt. There are more…don’t get me wrong…I’m just stating the fact that of all the ‘genres’ (if you will) out there – religious-based music by far suffers from the most amount of amateur attempts to make music on a major scale, before it’s anywhere near ready to go. In my experience, quite often it also borrows from rhythms and melodies of old hymns or folk-tunes and also fails to provide anything new, only the comfort of religious text offered lyrically through music that maybe just maybe shouldn’t have been made (again).

So…this may startle you, but as a writer, I also read! Christian Rock / Metal / Christian Metal was the very first thing I had read, before even reading the band name. It’s like my eyes see those words when it comes to music so that my brain can tell my mouth to go ‘OH NO’ as instantly as it can send the signals. I like Reliant K…I like Jars Of Clay…I don’t really have much use for DC Talk…and I know that whatever Christian Metal music sounds like is certainly going to be different than any of the experiences I’ve had with other faith-based bands…but was it going to be one of the few good ones I’d found over the years; that was the real question I had when it came to the music of Shining Force. For you all out there…I wanted you to get three songs in before dropping this knowledge-bomb on ya – and you METALHEADS out there know exactly WHY that is. Often a den of musical-arrogance and superiority, genre-segregation and a ‘mine is better than yours’ mentality…I needed you all to realize how GREAT the music of Shining Force was without thinking or suspecting you’re being subliminally preached to.

And hopefully…now that we’re here…you’ve realized how right I’ve been to do so…how happy you are that you found a kickass new metal band making music you love. And now it’s up to YOU…and believe me – if you cast this music aside simply due to its association with religion than thou hast made a severe mistake…and you should be flogged & caned or whatever they were doing to people in the Old Testament. Not the new one – you don’t get off that easy.

The guitars that start out the energetic drive in “Resist The Devil” set the stage for an intense energy and provide a real punch to the opening of this tune. If anything…I’d say this song similarly suffers a little from that same ‘backward’ feeling you get between the size of the verse versus chorus. I say ‘backwards’ as if there are some set of defined rules out there for music somewhere…I know there isn’t just as well as you do – maybe that’s the pull of the music of Shining Force; that may very well be a planned strategy in the music when you notice it multiple times within five songs. “Resist The Devil” really does have some of the best guitar parts I’ve heard of the five, and in the solos they shine brighter than bright with some versatile and truly clever tones. Just like on “Demon Fighter,” I think they’ve got another good idea here that just needs that slight tweak to bring out the dynamics that exist in this song, maybe flush out that chorus 10% more, and it’s ready to roll. It’ll be interesting to hear the finalized versions…looking forward to it!

Drum-wise, the tone and sound in the drums on “Resurrected” are probably my favourite from Ralph so far…so there you have it – he might have been the first part I questioned a little at the start of the review, but he’s also the main aspect driving this home to victory here in the final song. Very traditional metal sounds and ideas here…I’m not sure that it has many hooks for the masses to latch onto, but musician-wise, this is the song many of us are most likely to remember and love. Great parts in this final cut and the entire band is delivering at their absolute maximum…Randy flips between Ozzy Osbourne, Perry Farrell and Ronnie James Dio at sheer will and brings out a ton of exotic-flavour to his vocals on this final tune I’ve got in pre-release.

Definitely something cool happening here in Shining Force…they beat the odds against finding their way into my ears with faith-based metal-music; both elements which usually have a much tougher time breaking through to me. Somehow, some way…Shining Force has managed to pull that off and penetrate this thick, judgemental, Neolithic skull of mine to make a lasting impact here today – and I’d have to assume it was caused by their incredible writing, talent and driven-passion in their performance that did it…if you were to ask me.