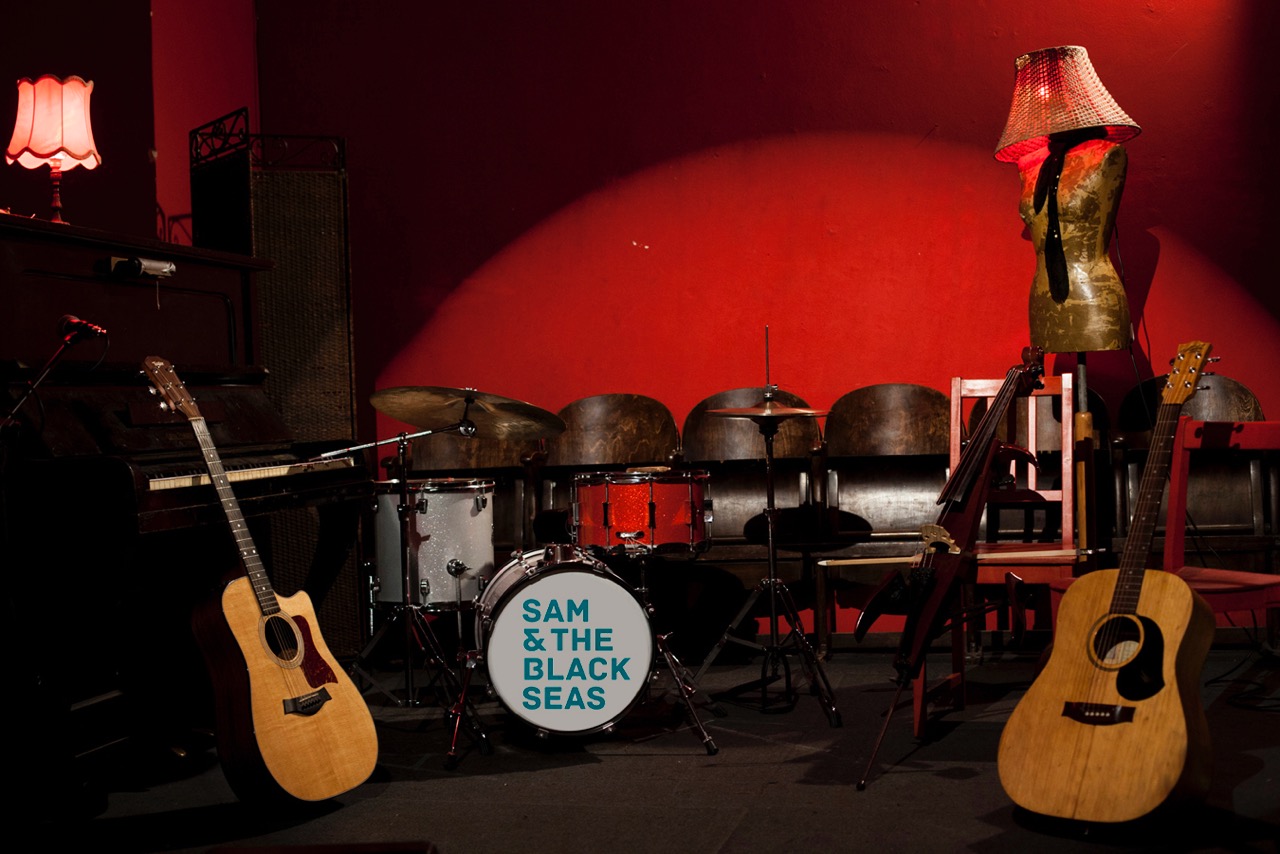 You definitely get that chill down the ol’ spine listening to Sam And The Black Seas…you can hear the specialness of what you’ll hear in these new singles quite quickly and quite easy.  The three singles on their Soundcloud page have a collectively-inviting sound to them.  I suppose if I’ve gotta find a category for them, you’d be looking somewhere in the realm of Indie/Pop/Rock…but interestingly enough, you’ll also find that as you play each song – they all rely a little more on one of those three aspects than the other; and although I’d be the first to say that these songs really do belong together and sound cohesive as a set – they also really do have their own unique and individual sounds, approaches and atmospheres.

There is an effectively simple combination working the magic of the music in Sam And The Black Seas.  Consisting of Samuele Rampani (Vocals, Guitar), Mattia Boschi (Cello), Andrea Bianchi di Castelbianco (Guitar) and Stefano Tedesco (Drums) – this combination have not only found that magic between them – but they’ve been noticed by the ol’ suits n’ ties and have got themselves a London-based label now supporting their music.  Let’s face facts…as much as we might be fans of what’s happening in the independent scene and have no plans to ever go for a swim into the mainstream ever again…well, I’d be lying to you if I said it didn’t freakin’ EXCITE me every time I hear that a band has been ‘upped’ and the music-mob has come a-callin’ to jump them into the majors.  I know labels are lazy…I know they’re full of promises and I know they rarely deliver half of what they’ll say they will…but I’m also quite familiar with the fact that these guys don’t leave their couch or offices unless they really do believe they’ve found something spectacular.  And whether I liked or disliked management or whether I did or didn’t know any of this story…if I was to listen and judge by the music alone – there’s no doubt about it to me either – Sam And The Black Seas have potential to become that true discovery…the real diamond in the rough of music.

I say this purely because what I’ve heard has been stunning.  I love the sound of the guitars in combination through this band, and they sparkle brightly as the short & sweet “Agata” begins.  From what I can see…these songs are nearing the two-year mark in age…they’re new to us here at the page yes – but you can already see that impressive play-counts nearing the 12000-mark have had these songs spinning all day, every day by the people out there ever since they’ve been released.  “Agata” keeps the opening experience a gentle, mild and tender one…but one with impact.  You feel almost like you’ve somehow stumbled upon a collaboration between Peter Gabriel and Bon Iver performing together.  I loved the way that the accent of Samuele just barely poke themselves into the music and provide you with only a hint of their overall sound…just enough to make it all sound extremely charming really.

While “Agata” gives you almost what you’d assume is nearly a sample of Samuele on his own by comparison to the other two tracks to follow – Sam And The Black Seas show their collectively extraordinary abilities over the following tune, “Within Me.”  Here’s where the cello parts from Mattia, the drums from Stefano…and the entire band, come to vibrant life.  “Within Me” showcases a firm mastery on melody and music – this is a song build on an expanding atmosphere that you can really feel building inside you as you listen.  Like a form of audible-inspiration – the sounds of “Within Me” are completing full of life and extremely uplifting to listen to.  Absolutely pleasant from any angle you listen to it from – I thought this middle tune was a real highlight in the set of the three, and also a really good between the two extremes of their sound which are featured more precisely on the opening track “Agata” and “The End Of The World.”

“Agata” as you already know, let you in on the softer side of Sam And The Black Seas.  They continued to build and strengthen their sound with “Within Me” – which ends up sounding like the ultimate compromise between “Agata” and the final track of the three, “The End Of The World.”  Here in this final tune – they’ve allowed the acoustics to really dominate the tune and drive the melody entirely.

For me personally, it didn’t seem to matter which sound or style I found them in – they’ve all got their merits and certainly deserve time on my playlist – yours too.  The guitars that start out “The End Of The World” are crisp, clear and sound absolutely fantastic…Sam And The Black Seas highlight another side of themselves in this final song we’ve gotten to hear from them.  “The End Of The World” is an absolutely ripping-good time…the mix becomes a little more involved for this final track – it’d be impossible not to notice as all the instruments begin to fire & thunder-away with maximum acoustic intensity.  The cello becomes much more prevalent here with some gorgeous parts added in…the vocals have a solid-chorus hook that really captivates – but again, one that is tremendously helped by the incredible guitar and cello parts that really surround this tune.  The drums find a fantastic energy on “The End Of The World” – and while it might be somewhat of a sad tune from the subject and story of the lyrics…I’d be pretty hard pressed to find a song this year that I’ve heard with a more invitational spirit than I’ve found here on “The End Of The World.”  Tremendously warm, fantastic energy, great contrast through the lyrics – and overall a great sampling of the musicianship in this band; I thought more than any other perhaps, “The End Of The World” got me really excited to hear more from Sam And The Black Seas.

And as far as I can tell…there IS more out there and available.  My Soundcloud list would continue to drift into other songs that had Sam And The Black Seas on them…but for whatever reason no matter what area of Soundcloud I click today – I can’t get them to display the songs or what’s up with them!  Gotta love the internet…BUT…from the tiny bottom-right window…I can see that they’re involved, and I can hear it as well…AND…after two years of keeping us waiting after these samples here – we kind of gotta assume that there has to be new music from Sam And The Black Seas out there somewhere, or at least coming right around the corner…

You can bet I’ll be there to listen, whenever it shows up!  I’ve had a tremendously great time listening to this four-piece band and I’ve only got reason to assume that anything else we’ll hear will be equally fantastic in the future.  Tight band, tight performances and stunning material written perfectly – these three tunes will certainly make an impact on you and leave you in the exact state you’ll find myself in right now…which is here with the volume-up, listening to Sam And The Black Seas, and cheering for more.  Excellent rhythms, beautiful writing…there is a ton of potential here and a seriously fantastic start with these first three offerings of beautiful melody and musicianship combined.