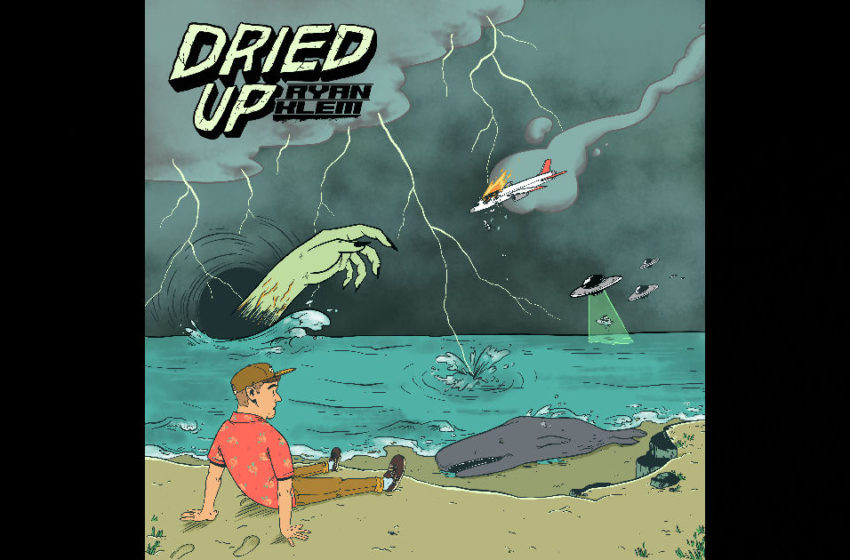 Hmmmmmmmmm!  Trying to decide how I feel about this new single from artist Ryan Klem…

…ain’t gonna lie, it’s been tougher to assess that this time around than it has been in the past.  Definitely still positives here to be found in the DNA of “Dried Up” – I think that’ll always be true of Ryan’s music; that being said, also by the curious nature of his sound & style, coupled with the willingness to try an entire range of things when it comes to the songs he writes & genres you’ll find him in…there’s bound to be peaks & valleys as he roams the audio universe searching for what works for him best.  Or he might just be content making whatever he comes up with, regardless of any rules, boundaries, or genre-imposed limitations…maybe the dude just wants to rock & make some tunes – ain’t nothing wrong with that either if that’s the goal.  OR (ok, ok, ok – final theory) maybe his whole thing is to never form any expectations about what you’ll hear from him next – maybe Ryan Klem’s sound IS versatility and we’ll never know what he might create the next time out…maybe he’s fueling his fan-base with surprise.

If I had to hazard a guess as to the inspiration driving at least half of this composition, I’d pin it to Modest Mouse without question.  If we’re talking about sound, structure, phrasing, and lyricism – listen to the opening verse and tell me that you wouldn’t feel like “Dried Up” resembles a lot of the way that Isaac Brock & company played their way through Strangers To Ourselves or We Were Dead Before The Ship Even Sank.  Where the difference is completely, is in the vocal department of course – very few, if any at all, are Isaac Brock – Klem knows better than to attempt anything too close or he’d be eaten up by comparison…as singers, I think most of us know that either we are Isaac Brock and don’t attempt what he does…or we lose focus for a moment, believe we’re Brock incarnate, and fuck his shit right up.  So like I said, Klem plays that aspect of “Dried Up” right by still being him when it comes to his vocals.  You’ll hear the song as well drift further from that Modest Mouse inspired beginning into something more folk-indie by design, smoother and more chill as a result of the easygoing cadence of his voice.

Having said all that…even though we’re talking different worlds of sound essentially, if you don’t dig on that indie-folk looseness that would come with a Modest Mouse cut…then maybe some caution here…

“Dried Up” might come down to the strength of the material itself and the balance between its different parts, verse, chorus, et cetera.  For me, even though the moments of this song that would be most comparable to others are found in the verse, that’s probably still the aspect of this single that I felt came out the strongest.  Even that, might be from a music/production standpoint 90% of the time – everything is really well mixed by Atom Smith, produced by Joshua Rumer, and performed by the main hero of the story & star of the show, Ryan Klem.  Vocally…it’s so much harder to tell; the natural design and flow has you craving a bit of that Brock wildness, but it’d be massively unfair to hold anyone to a standard like that.  I’m not fully convinced Klem couldn’t have used a bit more energy at times throughout this, or a bit more time maybe developing “Dried Up” from where it starts to where it goes.  His first verse comes out as a bit of a mouthful in the way he’s got these syllables slowly dragging…you can hear that search for the melody-line & flow, which is tough to reach because the metering demands instant speed and he’s goin’ at it chilled-out with perhaps a few less words than are required.  Outside of the verse, back into the instrumentation and Klem’s guitar – these moments are probably some of my favorites from “Dried Up” – that’s where you’ll also find another signature Modest Mouse move, but another suit that Klem seems to wear really well.  As far as the chorus goes, the balance I was referring to between parts of the song and the strength of the material…that’s where things get dicey.  Like don’t get me wrong, I like me some Klem…I’ve heard this dude do incredible things and I thought the world of the last single I heard called “In The City” just earlier this year…but I’m honestly not sure what to make of “Dried Up.”  One the one hand, I’ve got ears, they work, and I know that the hooks he’s written into the chorus of his new single are certain to pop back into my head, probably for the rest of time, especially after spinning this cut as much as I have in an attempt to figure this dude out.  So I get that.  On the other hand…those same hooks are undoubtedly a bizarre fit here, artistic & complex in design, and vocally stylistic to the point where you’ll either dig what he’s doing or you just won’t – it’ll be that polarizing for people listening this time around.  Again, as an artist with the courage to go down every avenue of possibility, unafraid to explore his creativity – Ryan’s going to have to come to terms with a catalog of potentially mixed results throughout the years…that’s just kinda how that goes, ask Brock.  The biggest lesson that can be learned from Brock himself, was that when confronted by the most extraordinary uniqueness in his music (like the chorus here on “Dried Up) – over time, he refined his madness & allowed himself to be consumed by the moment…but that took years & years to craft & find the courage to really go after it like he does now.  You can hear that potential in the writing here on “Dried Up,” and I think as a natural result, you kind of want that extra gear from Klem, where instead you’ll find a bit of caution and trepidation, rather than the reckless abandonment that the part he’s written might actually be calling out for when it comes to the chorus.  Lyrically, I think he’s done pretty well here…it’s a socially/environmentally- aware track that’s written with solid details & intentions…climate-conscious on a level, more or less pointing out that we’re “Dried Up” when it comes to how we treated this planet and our ideas to ‘fix’ it.  But Klem ain’t being preachy; he’s done a solid job on the words.  I also think moments like, heading into the pre-chorus around the first minute or around 1:25 just a bit later…where the music & personality seem to brighten & relax a bit, those were probably some of my favorite parts of “Dried Up.”  Guitar-wise, I think it’s aces all around…the tones of his guitar really come through perfectly in the mix, awesome soaring tones that float through the music behind Ryan as he sings this cut…smart use of effects on the chorus as well – I think that’s still guitar there too, though that could be a synth of some kind I suppose…that’s how different the sound becomes.

So like I said…hard to assess overall…I mean, I certainly didn’t turn it off or turn it down…but when comparing it to a song like his previous single “In The City” we’re probably talking night/day reactions for most people out there I’d assume.  I’m always willing to go down the rabbit hole with Ryan Klem to find out what he’s up to next – the man is in it for the pure love of the game, wherever the results may take him.  Ultimately I respect that in an artist more than just about anything else I can think of – and while I know there’ll be speed bumps all throughout the map of a route going in that direction for a music career throughout the years – I also fully know that it’s artists like these that achieve the real breakthroughs that can change the whole game entirely, because they’re willing to ‘go there’ and commit to even the wildest ideas.  I got faith in Klem…he’s far from “Dried Up” yet; this single is a decent tune & there’s still plenty here worth listening to; and there’s still every reason to believe that Ryan has got the creativity and innovative approach it takes to make music uniquely memorable.

“Dried Up” is out and available as of TODAY – go get it!  Find out more information about Ryan Klem and music from the official pages below!