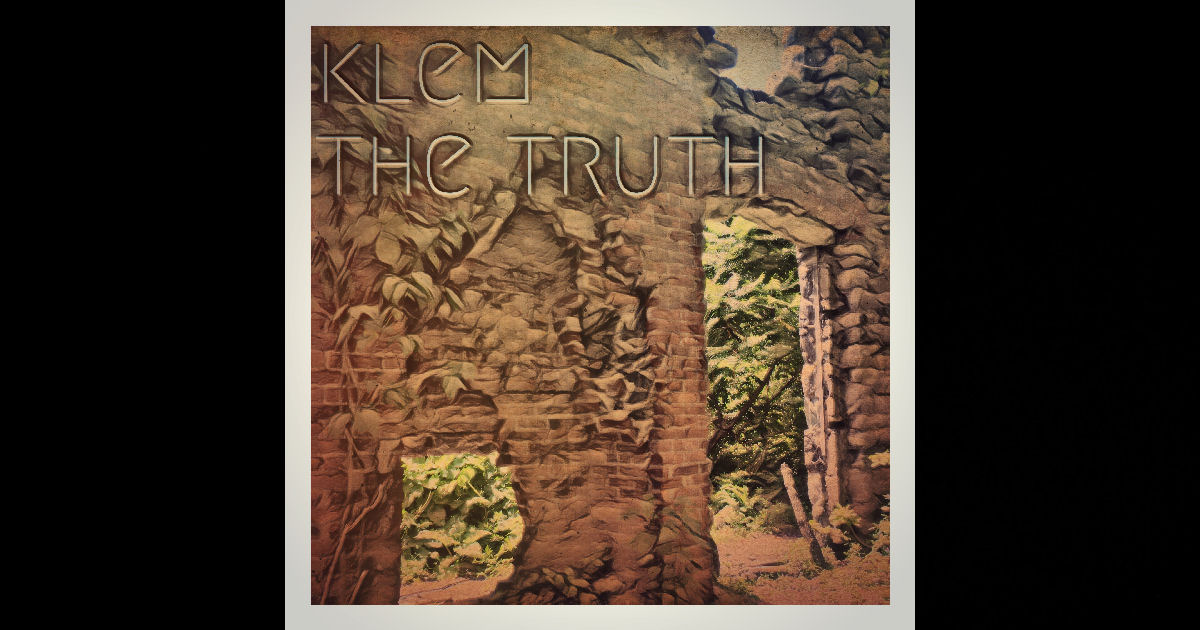 From the looks & sounds of things, Ryan Klem is making some moves with his music.  Cheerful chap too – apparently he wants to have ‘a million dogs’ – and hey, why not?  You make it big as a rockstar entertainer out there, ain’t no one gonna be able to dictate how you wanna spend those millions right?

For real though…aside from the random hound-related info I’ve found while learning about & listening to Klem, I did stumble across a mention of this being his side-project.  Looking at the list of genres he’s been a part of and the instruments he normally reaches for – I had to draw to the conclusion that what he’s got going on here with “The Truth” is decidedly different than the music he’s been rocking in the past.  Teaming up with rapper Rino was a good call for sure, this much I know; and though I can’t speak directly to the music Klem has made in the past, everything I’ve heard on this single gets an enthusiastic green light & thumbs up from me.  I don’t know if this current switch in style & direction is going to be a permanent one…but the strength in what I’m hearing on this single suggests that might very well be something Klem will wanna examine in the future to come.  Side-projects have a tendency to become the main focus when things start turning out right & coming together like this single does for these two.

For real…there are even things happening in “The Truth” that I usually hate in other songs.  I’ll explain.

A lot of those things surround Rino…but again, for the record, I think he pulls off a win here.  What works for him doesn’t usually work for other emcees out there, that’s all I’m saying; there are moments where you can feel Rino riding tight with the metering and there are moments where he seems to wander off and invent his own, chopping up the syllables or bending the words at will.  Generally speaking, I usually feel like that subtracts from the experience overall – but there’s a genuinely captivating tone and bold energy in Rino’s vocals that really hits the mark in exchange for all this.  He makes decisive moves on the mic…it might not always seem to fit perfectly inside the bars or consistently attempt to color inside of the lines, but to me, the confidence you can hear this emcee has on the mic and in his style, choices, and approach…it gave his entire flow a fresh energy to vibe on.  And for what it’s worth, the choices he makes ARE stylistic ones; Rino is clearly talented enough to hit the metering dead-on, but he’s chosen specifically to bring some added style & swagger to the mic, to put the character & charisma in the spotlight and give the track a more organic performance as a result.  Later on, when the effects are combined and the vocals end up distorted in what’s only a sound that’s typically used/found in Hip-Hop…again, usually I’d hate on this…but somehow, it’s nailed here.  I just hate on stuff when it detracts from an overall experience – if you’re continually adding and enhancing the vibe like Klem and Rino are here…then honestly, what’s to complain about?  So right here in the space where I’d normally be inclined to say ‘nah son,’ I feel like giving this performance a full ‘yessir’ instead…not only does Rino rap this out confidently with his own convictions on display through the complex lyricism & convincing tone in his voice – but each choice he’s made or effect added-in has made an impact overall.  I have no doubt that some will hear him pivoting & shifting his words around and feel like it comes out a bit staggered or jagged at times – but in the end, I think you gotta come around to the sound of genuine commitment on the mic & Rino’s raw energy seems ready & willing to supply that all day, every day.  To me, as long as you can determine moves like this are made for a purpose and done on-purpose, I’m willing to trade lots in exchange for a bit of swagger & identifiable style – you get that from Rino…there’s an art to the way this guy moves on the mic.

Musically…man…I really dig this tune.  Don’t get me wrong, ultimately, it’s the combination & collaboration between Rino and Klem that make this all come together in the end – but examining the music on its own?  Please homies – this is all aces!  Not only do I really like the selection of sounds being used and the outstanding production on every element & aspect of this cut, but the structure itself is built to powerfully develop, expand, and evolve as “The Truth” plays on, resulting in multiple spots where that one extra addition to the sound becomes an entirely magical moment along this adventure.  It opens up with the sparsest part of its design, rocking a subtle chill in that first minute-plus before you get that first incredibly gorgeous shift in sound around the 1:15 mark.  Moments closer to the 1:50 later on, the bass takes over while the guitars accent the vibe with otherworldly notes soaring gently into the atmosphere.  I dig how the cymbal sounds become more present and spread out their sound as it trails from bar to bar…part of me does wonder what it might have been like with that particular element tightened-up time-wise…like maybe it might have led Klem to more clarity without that lasting trailing effect.  In the end, after repeat spins, I felt like it was a necessary part of the whole vibe that really allows the hypnotic & captivating sound of this song to hang in the air just a lil’ bit longer, you feel me?  Besides that, everything else is remarkably clear from the synths in the atmosphere surrounding the tune to the smart use of samples – which I absolutely loved on “The Truth” as well – the arpeggio bass-lines & stunning guitar sounds…the hot & chilled-out electro beat…it’s all mixed on-point and I certainly ain’t complaining, just observing.  Moments like the breakdown around the three-minute mark bring this collaboration right into the spotlight together and demonstrate just how powerful they are as a unit on this cut, as well as individuals throughout their own respective contributions to “The Truth.”  Solid ending by returning to the samples, bass-lines and guitars…the music & vibe are highly addictive and the textural qualities are there at every moment if you really listen.  The ambient sounds that creep through the background of this cut at times added another layer of subtle mystique…the hooks of the chorus come through powerfully, memorably, and strong…the music is a solid match for the diverse & versatile style of how Rino takes the words for a charismatic ride, and when it’s on its own in the surrounding instrumental sections, comes out sounding even more stunning when it gets the whole spotlight.  All-in-all, strong single and solid experience.

Find out more about Klem at the official pages below!

Find out more about Rino at the official pages below!

Find the new single “The Truth” by Klem featuring Rino at Spotify: