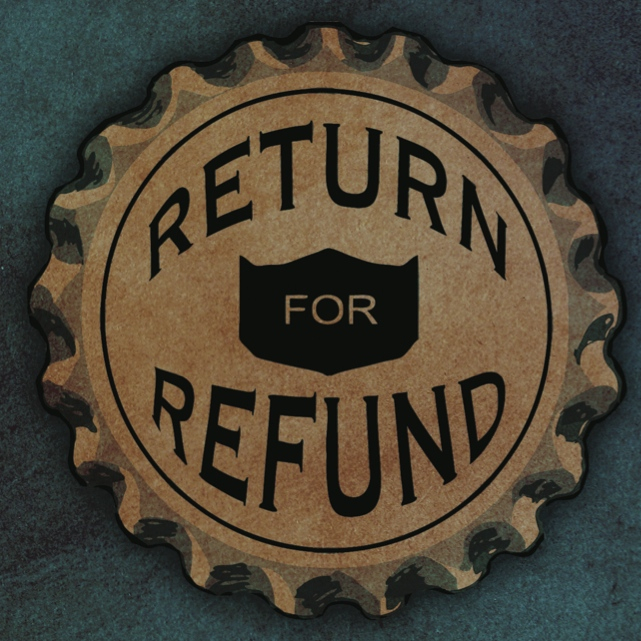 Big rock sounds echoing out of Toronto, Canada, coming from the amplifiers of Return For Refund – a three-piece rock’n’roll crew built on frantically-intense, straight-to-your-face music. Incorporating skilled musicianship, complex timing signatures and blazing-hot performances, Return For Refund is making sure you get every pennies-worth on their self-titled EP.

There’s kind of like…a LOT going right here. What I found was extremely interesting at first was just how clearly you can hear the influence of the mid-90’s-early-2000’s influence has had on these guys…you can hear how bands like The Offspring, Pearl Jam, System Of A Down, Queens Of The Stone Age and Nirvana played a part in the lives of this band. That being said…what was even more amazing to me was how okay all of this was with me; hearing these sounds coming through the ideas of Return For Refund was like a shotgun-blast of musical fresh air. At the point & time of this review – I’ve had several listens through of this new EP and I can’t even begin to explain just how fucking excited this record has got me…this is exactly what I want from the rock genre.

Opening up with “The Fields,” Return For Refund quickly stomps into place with a fast-paced start to the EP that sits somewhere dangerously in The Offspring/Nickelback territory…don’t get me wrong guys…if it was all-too-close I’d have turned this off and not be nearly as excited as I am. Like I was saying…it’s close but not quite…with the additional instrumentation & supercharged guitar solos…it’s much closer to something like The Replacements-meets-Pearl Jam. All of this being said – this is the kind of energy that makes for a massive opening at a live-show OR on record – this three-piece pounds away with thundering ferocity and just the right mix of alternative & punk to draw in fans from every corner of the musical map.

What I really appreciate, is that Return For Refund seemed to read my mind…they knew I wanted a long-term relationship with them and their music, and they didn’t give it all up to me on the first time out. While “The Fields” definitely gets the blood pumping, the volume up and the speakers shaking…in comparison to the songs to follow, believe it or not they’ve laid out nearly a ballad! “TV Light” is audibly one of the most exciting rock songs I’ve heard in a while…I love the way that singer/guitarist Drew Clementino attacks the microphone like a young Eddie Vedder in his grunge prime – this guy is one explosive singer just waiting for that moment to detonate. With all the trembling & shaking to the vocals that made Vedder sound like he was ready to bite anyone that came close – Clementino of Return For Refund is bringing back the instability of the atom bomb to the microphone in that same meaty way. “TV Light” is a very clever & smart rock-song…very similar to the punked-out moments from Pearl Jam that are huge hits with their diehard fans but rarely see the light of radio for some bizarre reason. The switch into the chorus of this song has the biggest set of cahones…it’s massively ambitious in the sense that the pace is lightening quick, but every one of these three are up for any challenge so it would seem. The song itself might mention blue-balls but this song makes me spring a complete rock’n’roll chubby.

And it only gets better. “Between The Sheets” fuses a noticeable System Of A Down set of harmonies and vocals with the rubbery, versatile sound of rock like the Rainbow Butt Monkeys used to have before they fully turned into Finger Eleven – at least in the verse that is. The chorus is more sullen, more melancholy than the up-tempo stop/start of the verse, which is delivered with perfect madness from Clementino. The drums from Karlis Hawkins is exceptional in this song, especially with the marching-beat call-to-arms mayhem in the chorus…it’s fantastic.

If you had told me at the beginning of my day that I’d be falling in love with a song called “Yolo,” I’d probably have told you to go fuck yourself. Alas…here we are and that is indeed the case – “Yolo” is complete brilliance from blazing start to ripping finish. Off-the-wall guitars from Sasha Molotkow and Clementino…this funked-out beginning satisfies completely with its grunged-out structure for the vocal-flow of the verse – but the chorus on “Yolo” is what audibly blew my freakin’ mind! This is about as intense as it can get in rock as they switch the funk for punk and rip through a wicked chorus that’s got an incredibly sharp hook. The drums again standout with complexity & immaculate precision on a tough beat delivered flawlessly, and the vocals rise to the occasion completely as they match the energy, tone and atmosphere of this blazing single-worthy cut at every second frantically like the countdown timer on a suitcase bomb. Excellent lyrics to drive home the real story behind “Yolo” and how it ended up being the subject of this particular song…it’s an awesome ode to the anti-cool.

“Some Is Better Than None” starts the slight departure of Return For Refund into different territory and styles as it heads into the final two songs. Almost a pepped-up blues-rock song of sorts, guitars rule through the verse & chorus of “Some Is Better Than None,” with a special mention also going out to whomever stepped-up to play bass on this EP for the three-piece…excellent job on this track. With a dark rhythm and groove, Clementino hits excellent rasp, tone & aggression on his vocals particularly heading into the second verse…but let’s face it, this guy has been kicking ass all throughout the EP.

Is there a punk-country genre? If not…”Those Bombs” nearly makes a case for there to be one as Return For Refund chooses to end the EP off on a different note than the rest. Does this work? To be truthful…as much as I like the song – and I do – it still felt like a very strange ending to this EP after all we’ve heard to this point. I can appreciate diversity of course, but I also appreciate cohesion…and I’m not completely convinced that this final tune gave the EP the epic ending it probably deserved. In retrospect, I might have either put this on the EP as track number two or three or perhaps left it for another EP altogether. In comparison to the seriousness of the other tunes, “Those Bombs” comes out entirely playful and loose-feeling…a good song on its own with spectacular guitars and great harmonies fuelling the fire inside it…but my immediate reaction was to hit repeat and get back to the rock of which they put so much focus, force and strength into.

Maybe that was their intention! If it was…bravo gentlemen, you got me! Regardless of the order or inclusion on the EP – these are six bloody brilliant songs from a band with a massively bright future. It’s not often a guy like myself feels a sense of national pride with a dominant worldly-attitude…but it really does make me proud to know these guys are kicking ass right here in Canada. Once the rest of the world catches on…which shouldn’t take long…it might just become a battle to keep these guys here; if I was Return For Refund I’d have my suitcases packed & ready to travel the globe – the world is screaming for rock music with this much confidence, precision and authenticity right now.

Find out more from their official page at: www.returnforrefund.com