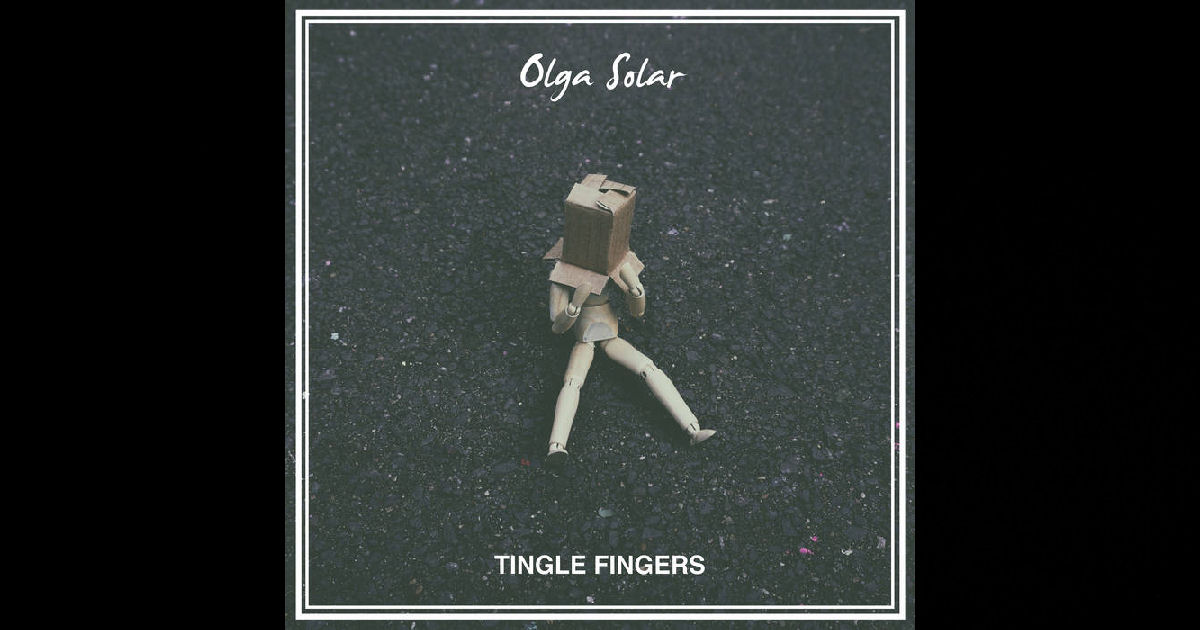 Lemme fill you in on a little post-review backstory here, after what happened the last time around when I reviewed Olga Solar’s last single from her 2018 Antilullaby EP…

The routine around this place can often be simplified down to me spending most of my time online & listening to music and my wife being at work throughout the day at her own job, joining me after the 9-5 for dinner & dog-walks et cetera.  We’re old-school in the sense that we’re still rockin’ a CD player in whatever the heck it is she’s driving around…a Nissan-something…but that still allows me to make a good ol’ mix-tape for the ol’ traveling times.  Yes, a mix-tape on CD…whatever, you get it.  Anyhow.

So I leave these mixes in there for her sometimes.  Most of the time, they’re by design and created for her, because she’s driving around in that thing a lot more than I am – so I usually stock it full of mainstream stuff I know she already loves so she can sing along…that’s where she’s at, that’s what she loves, and I’m happy to comply.  For the most part.  Sometimes I get crafty.  Knowing what I know now about independent music & where to find the REALLY amazing stuff out there that’s on the forefront of my own radar as well as what’s happening in the scene right now…I know that if I play my cards just right and carefully make a playlist full of killer tunes, there’d be no audible way for her to tell that what she’s listening to didn’t come from some of her favorite artists/bands out there in the mainstream at all.  Because THAT my friends…is truly the level that the independents are rising to…they’re that good right now, easily.  I know she won’t know the songs when I do this…she might not be able to sing along – at first…but I also know that when she eventually settles on a few tunes that she ends up really liking, that it’s completely confirmation that there’s an entirely universal and highly appealing sound at work.  She’s my measuring-stick for the masses…the ultimate indicator of what ‘the people’ truly love listening to.

And there I was, in the kitchen, just another day in the life of Jer @ SBS, when my beautiful wife came home at around five o’clock and I was making dinner for her.  We chatted briefly about her day and caught up on what we missed in each other’s lives like we always do…but it was what happened next that really amazed me.  She just kind of drifted off in thought for a moment, then decided she’d go upstairs to get changed out of her work clothes…and on her way down the hallway to the stairs, what do I hear her sing?

I’m no fool.  I know exactly where that came from.  That’s a tiny fragment of one song from the latest mix-tape-CD I left in the car-truck-thing, which just so happens to be from Olga Solar’s last single “Tulips.”  And to make a long story just a bit longer – what else can I tell you?  I wasn’t just happy – I was freakin’ overjoyed.  My wife doesn’t really communicate with or through music like I do…I’m tellin’ ya sincerely – you’ve really gotta stand-out on a whole other level for her to even raise an eyebrow or remember ya.  And while I know I’ll have to probably remind her a few times that it’s Olga Solar she’s actually listening to & loving over these next weeks & years to come – the bottom line is, that song connected 100%.  I had true confirmation that what made Olga Solar extremely special wasn’t just something I could hear.

I didn’t need that extra confirmation, it was just awesome to have it.  Like I said, I’m no fool – I knew last time around in listening to “Tulips” that there’s a world superstar in the making here.  While the other lead-single from the record “Tingle Fingers” might not be quite what you’d expect after hearing “Tulips” – I don’t think that there will ever be a time that we hear from Olga Solar and find something we’d expect to hear…she’s an innovator, she’s got an incredibly unique singing voice, she’s a tremendous songwriter, and she’s completely unafraid of combining her genuinely artistic perspective to her sound.  So naturally, “Tingle Fingers” still bears the hallmarks of her own signature singing-style of course, but the end result, which will likely always be the case, is that this cut from Antilullaby goes in a whole different direction.  Yet the one thing that I think is fair to always predict and assume about Olga’s music – no matter what direction she chooses, there’s something seriously magical for you to experience.

Where “Tulips” embraced a vibrantly colorful & expressive approach, “Tingle Fingers” is almost its extremely delicate & intimate opposite.  Ultimately, I can acknowledge that this single would likely be harder for some listeners to latch onto due to the highly artistic design & structure – I think that’s probably a given here…it’s less accessible in some aspects…like it would be a harder sell to the masses, but it’ll absolutely cement Olga’s appeal to those that are already listening like I am and fascinated by what she’s capable of.  Personally, I think there’s a ton of uniqueness on “Tingle Fingers” that is like, part Feist, part Alt-J, part Florence + The Machine, many of which I’d imagine Olga will always draw endless comparisons to, but they’re valid.  She’s got that incredible way of framing & phrasing her vocals into spellbinding sounds and seriously captivating, breathtaking moments where technique & tone reign supreme.  Truthfully, as far as singers go out there in the music-scene, independent, mainstream, whatever – Olga would be among the number-one draft-picks out there for any band I’m sure – she brings that much character, personality, charm, emotion, and authentic sincerity to her material.  She’s interested and invested in creating audible art – I think that’s completely clear from the way her music sounds…everything is so remarkably fluid and moves so naturally, like these songs flow right out of her.  I think the isolated & intimate sound of “Tingle Fingers” is extremely well assembled from beginning to end…most of the time it’s just the bass, guitars, drums, all chillin’ out in the background while Olga works her magic & melody on the microphone…not a thing out of place to be found here and the more that you listen to this, the more you get into her brilliantly poetic lyricism and powerful expressions.  While for the most-part, she’ll keep this performance mellow to match the energy & vibe of the music, there are multiple moments where she really embraces the space and belts it right out too – Olga has incredible instincts on how to shift the direction of the song & melody to the next-level with her voice.  Like listen to how the chorus ends for example, and how perfectly she sings that part with the energy to mimic the lyrics perfectly and make the words audibly FEEL like what she’s saying…that’s the connection you always want to hear in a singer.

I think between the curious sounds of the guitar, keys, and bass that create the atmosphere on “Tingle Fingers,” that there’s more than enough there already to bring the people in to listen to this tender tune – you add in the incredible sound that the drums have in the mix and the smart layering & reverb added to Olga’s vocals…the insightfully flexible movement & structure of the lyrics & music…to me, this is another strong showing from Olga Solar and the crew of ace-talents surrounding her on the Antilullaby EP.  Delicate songs are always going to have to battle a bit harder to get attention – but the sparklingly sweet sounds floating through “Tingle Fingers” and highly interesting design of this song will hopefully beat those odds and lead this single to the attention it deserves and serve as yet another gateway into her latest record for listeners.  I absolutely love what’s happening in Olga Solar’s music – like I said earlier, I didn’t need more confirmation of the awesomeness that’s brewing here – but I’m certainly happy to have it!  She’s a visionary artist and I’d bet the farm she’s gonna hit the big-time one day.

What better way to celebrate International Women’s Day than with one of the strongest & most unique voices out there in the music-scene today!  Cheers to you Olga Solar – you’re a superhero in our universe & thank-you for creating such incredible songs to share with us all.  Find out more about Olga Solar by visiting her official homepage at:  https://www.olgasolar.com