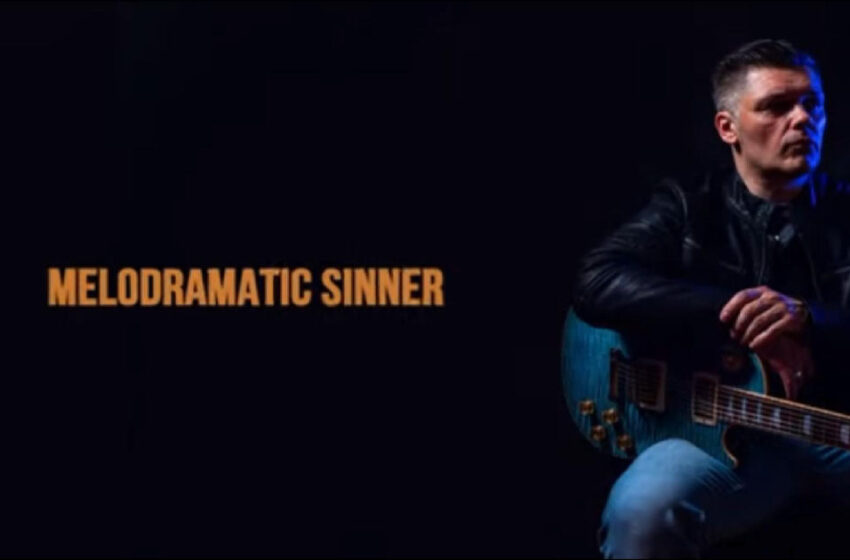 Our lil’ Canadian site looks like it’s heading back overseas to Europe in this morning’s review, as we head into the scene of Zagreb, Croatia once again here in 2021 to check out new tunes from an artist going by the name of Melodramatic Sinner.  Been a while for us – but believe it or not, we’ve been there before – probably a couple times over the past decade at least, most notably the last time I can still recall clearly, when reviewing the music of The Basewalks back in 2018.  Of course, time & changes can always affect the entire course & direction of a music-scene no matter where you might be in the world – especially these current days we’re all living through – and it’s also fair to say that, really, unless you’re living in whatever specific place the songs & records you’re listening to are coming from, chances are we’re just getting a fragment…a piece…a snapshot view of what the entire scene might be like.  It’s tough to get the full picture of what’s happening anywhere else outside of the place where you live – but I gotta say, it’s been extremely awesome getting at least an idea of what the music is like so very far away from us.

Melodramatic Sinner offers a different dimension in sound from the Croatia scene – and as you can tell by the moniker itself, this singer/songwriter is proudly unapologetic and direct with his style.  And hey, why not?  Embrace who you are, make the music you make, and the people will come to you – believe me when I say, there’s no style or sound I can think of that doesn’t stand a chance with finding a home with the worldwide audience of the internet.  Anything in a melodramatic style is likely going to face some intense scrutiny with the people out there listening en masse – but let’s be real here – if you’re making the music, it’s more than a safe bet you won’t be the only person willing/wanting to listen to it too!  As we always say around these pages of ours, it’s all about confidence, commitment, passion, and your own genuine interest in the material that’s going to lead your music to connect with others out there…when it comes to these aspects, clearly Melodramatic Sinner has a lot of positives going for him.

The commitment in this artist is something you can see long before you even push play.  Over the past year, Melodramatic Sinner has surged forward with his career, releasing something close to at least a dozen or more singles online throughout 2020, including one of these two tracks we’re reviewing today in review called “Merry-go-round.”  Keeping the momentum going strong, he’s already released two new tunes in 2021 – one of which is the other we’re discussing here, called “Revealed.”  Each give us their own unique insight into the scope of what Melodramatic Sinner creates, with a more Rock-based sound to fuel the slow-burning emotional depth in “Merry-go-round,” and a more stripped-down acoustic-based approach to his latest single “Revealed.”  Ultimately, he shows strengths in potential in each of these two styles he’s chosen for these songs we’ve been listening to here, and having a range of what you can offer the ears out there listening is always an advantage when it comes to getting your music out there.  I’m probably a little more partial to “Merry-go-round” myself; but you very well might like “Revealed” more – it’s our differences in opinions that make the whole WORLD-go-round, and also reinforces facts, like how well Melodramatic Sinner can jam on guitar, when we all arrive at the same conclusions on certain things.  This dude’s got an excellent technique and a ton of ideas when it comes to his guitar playing, which he’ll display on both tunes in review here – and the added grit & distortion gives an exceptional weight to the rhythm of “Merry-go-round” while you’re also entertained by smart complements along the way from the bass-lines, cleverness in the lead-guitar parts, & even some horns!  But like, if you listen to say, right around the 3:15-4:00 area of “Merry-go-round,” there’s no mistaking just how much of a master’s grip that Melodramatic Sinner has on his guitar – dude sounds fantastic, and puts in a Blue Oyster Cult-like dimension & level of depth into the spectacular tone of this tune.  He sings it well, hits bold notes with confidence & his melody intact…hooks are strong in the chorus for sure – “Merry-go-round” reveals the craft in his instrumentation & song structure, and certainly his passion.

For those of you out there that aren’t in the habit of listening to music from all over the world like I tend to do, I can tell ya that the number-one question, by a clear country mile, from every singer/songwriter out there that’s writing in a language outside of their own, is whether or not the words do/don’t make sense to the rest of us, or if they connect as they should.  For the most part, whether examining the 2020 cut “Merry-go-round” or 2021’s “Revealed,” Melodramatic Sinner’s lyricism is pretty well intact for the majority – and it clearly goes without saying, he’s done a much better job with his songwriting in English than I’d ever be able to hack out a review in any kind of standard Croatian.  To me, I think it’s a real testament to the commitment of an artist when they write in a language outside of their own – and as a wordsmith myself, I truly find it all endlessly fascinating.  With so many words to choose from, with so many odd translations that would likely pop up in trying to express what you want to say in a completely different language…undoubtedly, there are slight issues that arise, but nothing so detrimental that you wouldn’t get what Melodramatic Sinner is singing about.  It’s more akin to things like, words we probably just wouldn’t choose ourselves in our normal everyday speech; sometimes that fit is noticeably a bit awkward, but at others, it demonstrates a remarkably poetic aspect that ends up communicating to us on a very sincere, humble, and entirely unfiltered level.  Think of it this way – when you’re not 100% sure of which word to grab, you’re likely to latch onto the one closest to what you think is right – and the interpretive value of language takes over, no matter which one you’re singing in – we hear those words as listeners and know how we would, or wouldn’t, typically hear them used.  In tunes that come from outside of countries where English is the dominant language, you’ll very often find words you might not have heard for years & years pop up in the lyricism…because there’d really be no way of knowing that kind of stuff outside of speaking it & reading it every single day.  So in a sense, songs like “Revealed” almost becomes closer to what we’d recognize as a ‘stream of consciousness’ style of writing – and that in itself, still carries a great amount of artistic appeal through its varied uniqueness.  Like I’ve been getting at here, the flipside of this whole coin is that when you’re not as familiar with the language you’re singing & writing in, you end up with combinations of words & ideas that no one on the North American continent could even conceivably come up with – and that is honestly quite amazing.  It makes logical sense…but it’s still mind-blowing to experience music when it comes to crossing cultures.

Where Melodramatic Sinner deserves the most credit is in the palpable emotion that he puts into both his musicianship & vocals – this is where he proves that music is always our most universal language.  When you listen to his words, and you hear how well he complements the vibe through the atmosphere & space on a song like “Revealed,” you feel it, full-stop.  Words are a great thing of course, but it’s when you find an artist like this with the gift to communicate through sensory sound, that everything begins to take on several meanings and shows its vast potential.  Essentially, we’d all get something different to like or love out of listening to the music of an artist like Melodramatic Sinner – and that’s a spectacular thing to have goin’ for any artist or band this early on in their career.  Guy’s got an excellent voice and remarkably professional control over how he sings to go along with his stunning musicianship & guitar – it’s going to be more than interesting to watch & listen to Melodramatic Sinner flourish out there in the independent scene and continue to refine his craft with his passion even more over the years to follow.

Listen to more music by Melodramatic Sinner at his official page at Spotify here:  https://open.spotify.com/artist/6j2jgl6qvbWDHl54p6OYvQ