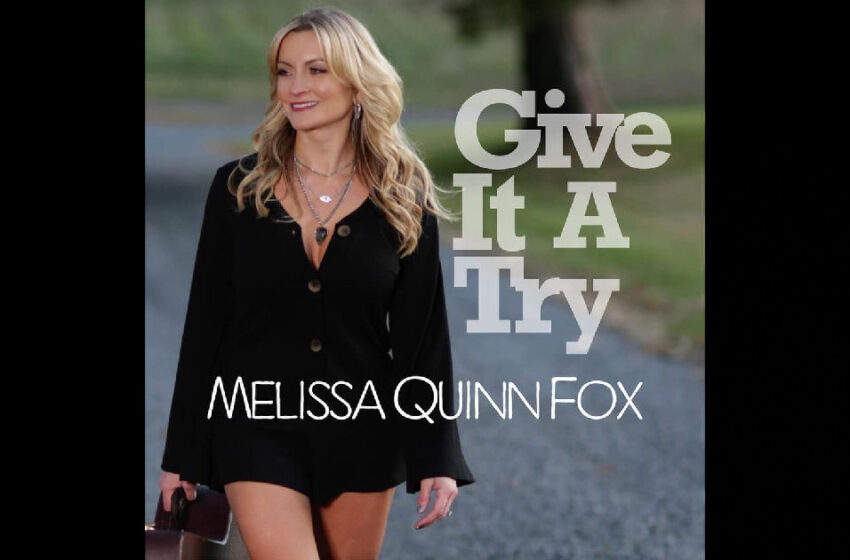 Melissa Quinn Fox – “Give It A Try” – Single Review

There ain’t a solitary second of Melissa Quinn Fox’s new song I’d even dare to suggest changing – she’s got the very definition of a single-worthy tune in the modern-day Country/Pop realm with “Give It A Try” and an absolutely fabulous voice.  There’s really something about this style of music that’s starting to be revealed to me through the warm glow of the production that certain songs seem to have…and while I’m just about as naturally resistant to Country as a person can be, there is a sound in this genre that’s really starting to break through to me.  Melissa’s got it, yes – but she’s also got a boatload of talent too.

I don’t wanna accuse all the singers & songwriters out there for communicating behind the scenes and ganging up on me to make a statement here in 2021, but lately I’ve sure been on a real decent run of being introduced to several incredible new names and I’m more than proud to add Melissa’s name to my growing list here.  This would be TWICE that the Country genre itself has ‘got me’ this year alone, which has to be some kind of record; I did a press release for a dude named Jonny James that I felt like was definitely a name to remember, and I feel that same level of magic & pull towards Quinn Fox here.  The point is, there are great things happening out there in the independent section of the Country scene and real artists emerging with substance & bold material that hits the mark in brilliantly accessible ways; Melissa’s got that sincere connection to her songs that’ll pull people in from all over the fringe and right onto her bandwagon.  I’ve got me a nice comfortable seat up front now…and I’ll expect you’ll be joining me soon enough; it’ll either be this song right here with “Give It A Try,” or without a doubt right around the corner.  I’ll put it to ya this way…you don’t end up with a single this impeccable without having a whole bunch more of’em inside ya as well – Melissa’s in for a wild ride in the future to follow, and a phone that’s not likely to stop ringing off the hook once it gets goin’ and the people out there catch on.

Won’t take’em long Melissa, I can promise ya that…this is one of the most repeatable tunes I’ve heard so far this year without question, even with all the fantastic music I’ve heard out there so far in 2021.  What’s not to love here folks?  She sings with a wonderfully classic style & charming grace, she’s got an absolutely exceptional singing voice that she’ll reveal through the most endearing soft-spoken moments like the breakdown and her ability to rise to the occasion in the surge to the finale of “Give It A Try.”  She doesn’t just have a great range & perfect tone y’all – she knows exactly how to use both of these aspects to max potential with professionalism & passion doled out in equally impressive doses along the way.  To say that Melissa’s ready for the big-time would be to put it mildly, I assure ya – she was born for this.

Beyond all this great stuff you’ll find from the microphone and key elements in the musicianship like how the bass-lines & banjo will stand out for all the right reasons on “Give It A Try” – when we’re talking about sentiment & sincerity combined, that’s where Melissa proves to be more than a mere force to be reckoned with – she’s unbeatable & unbreakable when it comes to the combination of these qualities.  I won’t give EVERYTHING away here…but suffice it to say, she’s nailed a love song so much harder than most ever will…her understanding of what love is really all about, how it moves our hearts, and how it makes us want to be daring in ways we’d never think possible…it’s all incredibly well-detailed through her lyricism on “Give It A Try,” and anyone on the frontlines, willing to battle on behalf of love is pretty much always aces in my books.  All you need is the authenticity & genuine sincerity to come with it, and Melissa Quinn Fox radiates & beams all this & more through your speakers while you listen – essentially, there’s no mistaking ‘the real deal’ when you hear it, and she’s it.  Her inviting & endearing sound is a surefire hit with listening ears out there, and the execution in her performance with the full band surrounding her on “Give It A Try” is second to none – everyone brought their A-game to the studio, and the results sparkle & shine from the lead to the background & everything in between because of it.

Stellar job from start to finish!  I might not naturally be the world’s biggest Country fan – that’s on record here throughout our pages I’m sure – but it’s artists like Melissa that have the strengths to beat the odds, in life, and in love.  “Give It A Try” is flawless as flawless can be – and I’ve had absolutely no problem whatsoever turning this tune right up to the rafters to sing along with her loud & proud here from the safety of the ol’ studio confines…this is what single-worthy sound & real sincerity is all about.

Find out more about Melissa Quinn Fox from here official website at:  https://melissaquinnfox.com

Tags: Give It A Try Melissa Quinn Fox Singles sleepingbagstudios