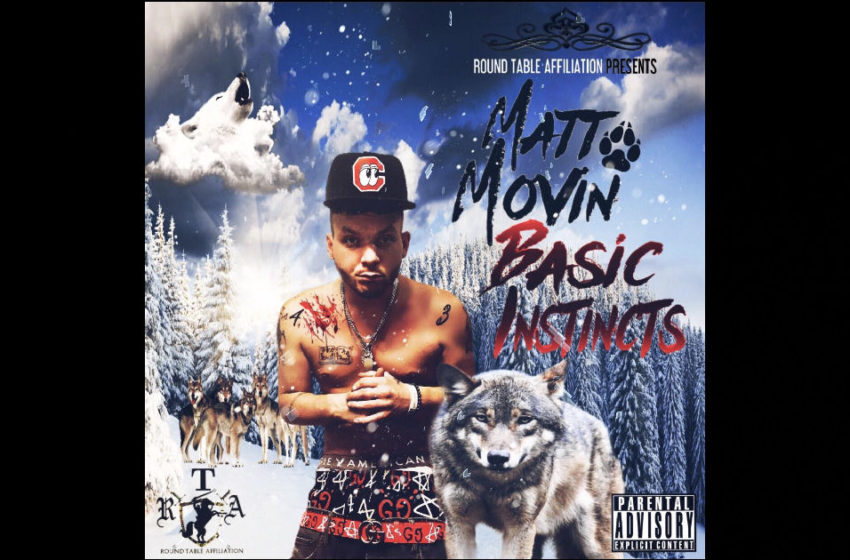 Okay wait…is this what Chattanooga, Tennessee, sounds like these days?  Who knew?

He might not be busting out of the part of the world you’d expect, but Matt Movin’ is indeed, makin’ moves with his career.  With a brand-new mixtape called Basic Instinctz out this year, the Rap/Trap emcee is flexin’ a sound built for right now and material that’s bound to grab your attention.  The man’s got skills!  Ain’t no doubt about it.  I might only have a sample from the record here, but it’s plenty clear from these three cuts that Matt Movin’ knows his way around the m-i-c – let’s check this songs out…

One way to really measure the effectiveness of any artist or band out there is when you’re tested with a sound that’s outside of what’s typically on your playlist and you want to turn it way the fuck right up.  I end up being exposed to all kinds of music here on this site of course, but for the most part, I drift to the way back old-school of classic Hip-Hop & early Rap when it comes to these genres – and Matt Movin’ is undoubtedly further along in music’s timeline, much more towards what’s currently happening right here & now.  Working R&B/Club/Trap/Rap vibes – this guy will more than impress ya with the single-worthy sound of “Who You Foolin” – I mean, it’s almost a complete given.  Matt Movin’ has got massive crossover potential with a cut like this, which is bound to appeal to a huge audience out there from all corners of the Rap/Hip-Hop genre, again, especially those that dig the current modern-day vibes.  This is a huge cut, all-around – Matt’s flawless on the mic and confidently keeps the melody in his words intact and his presence electrifying through his performance throughout this entire first impression – definitely the kind of cut that reveals how much commitment & effort he’s putting in & definitely makes me want to listen to more.  “Who You Foolin” is continuous entertainment at all times – in terms of a gateway into an album, this is pretty much the perfect example of a single strong enough to pull anyone in to find out what else is goin’ on.  Like for real…if an old greybeard like me wants to turn “Who You Foolin” up to the rafters, you literally have no excuse not to want to do the same – Matt Movin’ comes out crushin it!

“Up And Away” focuses in more on representing the verbal skills of Matt Movin’ as an emcee – and he dominates the mic through the roll & flow of this second sample off of Basic Instinctz mixtape.  For those that dig on clarity – which I always believe you SHOULD when it comes to anything-Rap, because dammit those emcees work HARD on their words yo – you’ll get plenty from Matt on “Up And Away.”  That being said, the speed of his flow will keep these words Movin’ at such a rapid pace, you might not catch’em all at first…so repeat the experience!  You’ll hear he’s puttin’ it all out there clear as day – but man the dude can rip rhymes at a blazing speed when he wants to crank up the heat!  Dude’s got perfect rhythm and cadence to his words – after listening to all three of these cuts here in review several times throughout the week, I always appreciated that Matt never forgets to bring life to his lyrics.  I mean, he’s got a metric ton of words goin’ on in a track like “Up And Away” – but no matter fast he needs to flow, he always makes sure to PERFORM at the same time; he always finds the right energy to suit the words and puts the right emphasis on every syllable & sound that needs it along the way.  Dude’s kind of working with some of that Nelly-esque magic goin’ on throughout “Up And Away” – Matt’s rapid-firing thoughts at ya, but rhythm & melody remain the keys to his success on this song.  It’s probably a bit more on the subtle-side of a single-worthy sound in comparison to the other two cuts we’ve got here in this sample set, but in terms of skills on display, this track might outshine the rest.  Those hooks in the chorus and the slick way the words from Matt roll right into the microphone…I mean c’mon y’all…that’s hard to resist energy and a wickedly uplifting vibe right there is what that is.

Like I was saying in “Up And Away” earlier, people out there work hard on their lyrics, and y’all should be paying just as much attention to those when it comes to listening to music out there.  You don’t want to miss the mastery of precision & flow that the design of the lyricism on “Used 2 Be Mine” offers, you just don’t homies, straight-up, full-stop – do NOT get caught sleepin’ on what Matt Movin’ is capable of.  On this last sample from the Basic Instinctz mixtape, you dive deeper into a more serious & personal vibe…for me, I dig that…I feel like we get to know the man behind the music a bit more here.  But the bottom line is, LISTEN to the art of the wordsmith in full-effect here…Matt’s been impressive right from the drop of this experience with his music, but the endless string of words and how well everything fits the metering & flows so fluidly on “Used 2 Be Mine” deserves an extra shout-out.  Movin’ takes “Used 2 Be Mine” more stylistically than the first two tracks, finding a gear that arguably suits him even more on this last single of the sample set – don’t get me wrong, it ain’t gonna be the happiest tune you’ll hear this year, but it IS compelling, thought-provoking, and real.  Matt Movin’ allows for a moment of exposure and vulnerability on “Used 2 Be Mine” that completely connects – and just so happens, he’s also got one of his most memorable hooks in the chorus to go along with it all; it might be a heavier track emotionally & concept-wise, but I’d go down swingin’ in an argument that there is equal amounts of single-worthy sound on this cut as you’d find on “Who You Foolin.”  Completely different styles, completely different songs, completely different vibes altogether – I get that – all I’m saying is, listen to the authentic connection that Matt Movin’ establishes between him and the music on “Used 2 Be Mine” – that’s the sound of a man at the top of his game right now.  Does he go on to crush the rest of his Basic Instinctz record?  You’ll have to make sure to listen to the rest of the cuts to find out for sure – but if these three songs are any indication, you’ve got every right to believe he probably kills it – Matt’s rocked every one of these cuts from the sample set and offered different glimpses into what he’s all about.  Again, for me, as much as I love the endlessly catchy vibes of “Who You Foolin” and the killer flow of “Up And Away” – it’s this seriously tight switch into a more melancholy sound on “Used 2 Be Mine” that ended up leaving the most memorable impact on me personally as a listener…I think you get the most of who Matt Movin’ is on this track and I felt like the hooks he’s written & performed are essentially bulletproof.  Definitely an artist you want to have on your radar – and one you gotta have on your playlists – solid stuff all-around here from Matt Movin’ – he’s giving you every reason to listen to more.

Find out more about Matt Movin’ from his official homepage at:  https://www.mattmovin.com