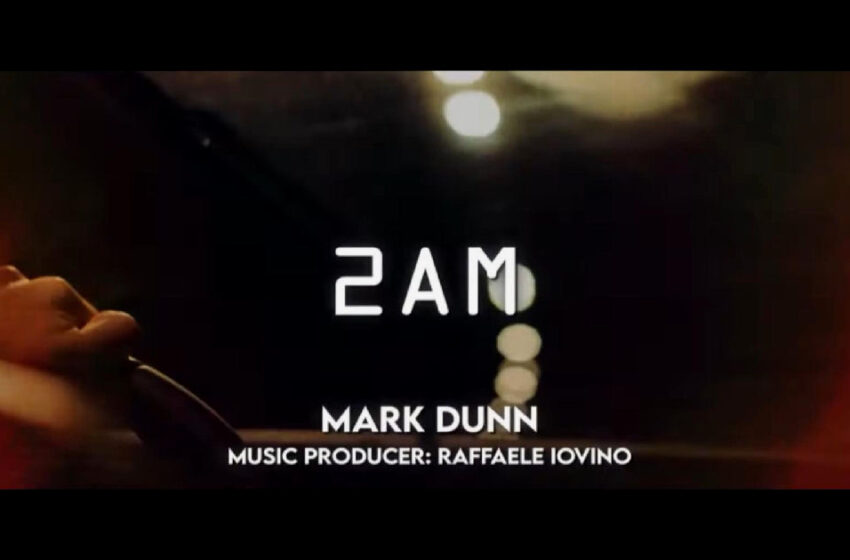 Okay…who’s up next here…ahh yes, we’ve got Mark Dunn on our pages once again as he continues to find his way into the scene.  He’s had pretty solid success here so far…he made a great first impression with his debut single “Walk In The Snow,” followed that up with a fairly addictive second track called “Young Salamander,” and now he’s back in action with a new cut called “2 AM” before the end of 2022 has come to a close.  Today we learn that a couple things can be equally true when it comes to the art of making music…you can create a really well done song, and it can still become a completely lateral move.

At the end of the day, it’d be hard to argue that Mark hasn’t covered all the bases when it comes to what you’ll hear on “2 AM,” and that’s the reality we’re facing here.  It’s got genuine depth to its sound and a more serious vibe than we’ve heard in his music overall to this point so far, but like everything we’ve heard from the man, it’s still got noticeable hooks that listeners can latch onto.  He sings it well, the music is on-point, the words tell a decent tale…obviously, all of these things are really good things that you’d want to have within a song – but if I’m being real with ya, “2 AM” is missing a whole lot of the magic that Mark’s already shown us in his previous singles, and that’s something to be cautious about.

Because there isn’t a day that goes by where I don’t hear some really good song that doesn’t exactly reinvent the wheel, but holds its own, is listenable, and could fit onto just about everyone’s playlists somewhere.  Do I remember what any of those are?  Probably not.  That’s partly on me, I need to free up space in my internal hard-drive at this point from all the music I’ve heard over the years – but the odds are that most people would likely be just as forgetful about songs we consider good but not great & tunes that lack whatever that special X-factor is that makes moments authentic, unique & memorable.  In my line of work, we call it the ol’ ‘sea of sameness’ – and that’s the last place you really want your music to drown in.  It’s filled with songs that are alright…the kind of cuts that your friends and family will always tell you are great…and music that lacks the spark, identity & degree of staying power you want to find in the stuff you create.  Like I was tellin’ ya – “2 AM” ain’t a bad tune at all…in fact, considering that Mark’s still relatively new to the scene, you have to factor that in and technically applaud the guy for what’s essentially a flawless tune in many ways – he’s given this material everything it could potentially have.  That being said, we’ve heard it.  Not this specific song of course, but something very much like it, and quite likely many times over the course of flipping through the radio dials throughout your years.  Doesn’t mean it’s not something to be proud of in a weird way; a seamless song is no small achievement and Mark’s attention to detail from the music to the microphone still deserves many accolades for sure.

All that being said, it’s better to nip this issue in the bud earlier on into a career than find out way later down the road.  Does Mark want to vanish into the anonymity of the sea of sameness, or does he want to stand out apart from the rest?  Is making a solid tune from start to finish enough, or does he want to make music that demands you come back to repeat it?  Does he want to be remembered for the songs he creates and establish his identity permanently to the point where you could pick it out of a lineup on your playlist blindfolded, or is creating a decent tune to listen to satisfy the goals he has?  The only person that has the answers to those questions are him – I’m just the dude that’s bringing them up.  Because if you were to ask me, there’s more single-worthy hooks, more identity, and more reasons to return to be found in “Walk In The Snow” or “Young Salamander” than there are to be found in “2 AM.”  Maybe that’s something he’ll want to consider, maybe it’s not – I’m not him, so I really don’t know; and like I said, there’s going to be tons of people out there that are willing to say “2 AM” is great and call it a day, leaving it at that, because that’s not exactly untrue.  It’s well put together, well produced with an assist from Raffaele Iovino, and gives you a dose of what Dunn’s music might be like with a more aggressive edge to it.  Does it stand out as much as the friendlier/funnier side of things he had goin’ on in “Walk In The Snow” or the quirky-yet-memorable repetition he worked with on “Young Salamander?”  If you’re asking me, I’d tell ya no…but I’m not everyone and there are all kinds of opinions out there other than mine, trust me on that.  Fundamentally, this all comes down to the questions I’m posing, and what kind of artist Mark wants to be.  If you were to ask me, and again, it seems like someone did – I’d readily tell you that it’s not just the hooks and the lighter-side of his sound that led him to success on his first two singles, but the fact that we actually got a better glimpse of the personality of the man behind the music than we experience on “2 AM,” which more or less feels like one of those songs that could have been written by anyone – make sense?  “Walk In The Snow” and “Young Salamander” though?  That’s pure Dunn…the kind of uniqueness, personality, and writing that no one else could really repeat – when it comes right down to it, that’s the kind of stuff that establishes identity on a permanent basis.

So would I listen to “2 AM” again?  Heck yeah I would.  Am I going to come rushing back to repeat it?  Probably not so much.  Will I remember “2 AM” in a month’s time, compared to how I still remember both “Walk In The Snow” and “Young Salamander” even now, months after I reviewed’em on these pages of ours?  I think you get what I’m getting at.  Mark Dunn has a gift for uniqueness that others simply don’t have…I know that’s true, because I’ve experienced it in the past…and if it makes me the bad guy for pointing out that “2 AM” is missing that aspect of his writing & what he can bring to music, so be it – I play the role of THAT dude, all the time.  Because I don’t want this guy to fade away into the sea of sameness…not when I know he’s capable of finding his way right to the top of the mountain of awesomeness – but it takes objectivity, ruthlessness, and focus to get there my friend.  It’s all about deciding if you want to make music for a moment, or for a lifetime…being unafraid to be different and to stand out from the crowd for all the right reasons…Dunn’s more than capable of that kind of greatness, and the more he believes that, focuses in on what makes him unique, and taps into it, the better off he’ll be in the long run.  “2 AM” is a good tune, no doubt about that – but he’s capable of making great ones.