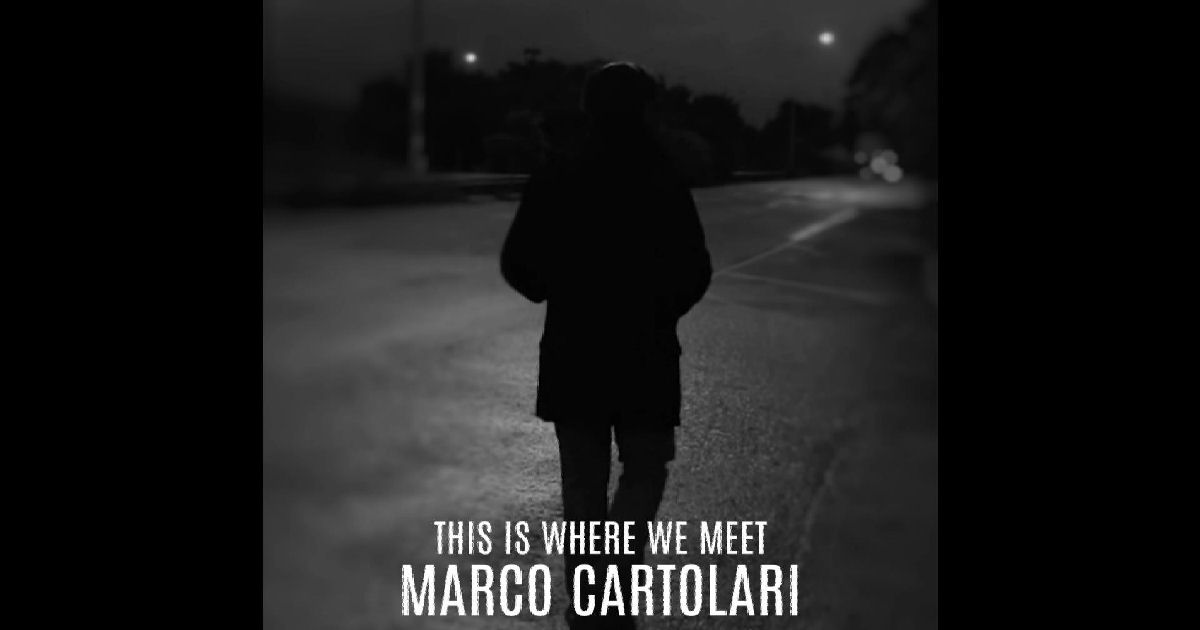 Marco Cartolari – “This Is Where We Meet” – Single Review

Quality tune from Marco Cartolari…there’s a real in-depth atmosphere & palpable, heavy-emotion that runs through “This Is Where We Meet,” his brand-new single.  He’s got a seriously interesting vibe flowing through what sounds like a mid-90’s kind of style with a touch of a classic songwriter’s touch that you’d find in artists like David Gray or David Baerwald.  The storyteller-type…but rather than get too weighty with the details in the lyrics, “This Is Where We Meet” finds a commendable amount of balance between what’s being said and the tone, intensity and focus in how Marco sings it.

Marco seems like a great guy if you were to ask me.  I’ve had the privilege of talking with him a bit behind the scenes like I do with many of you out there – and like many of the artists I respect most, he’s looking to grow, evolve and continue to let his imagination & creativity guide him in his music.  He likes many of the same bands I do, including my favorite of all-time, R.E.M. listed right there in his influences on social-media – AND!  How’s this for a ‘current location’ – it says Italy, US and everywhere.

The official story is that he was born in Italy, started rocking guitar at 14, moved to the US after graduating college, went on to conquer university at Columbia, did the corporate thing for probably what he’d consider to be too long before finally tossing it all to the side to become a musician full-time.  Respect!  Doesn’t matter when it happens in life – the important thing is to put yourself right into it.  That’s what it’s all about people – Marco’s showing you the dedication it takes by committing to his passion and truly going after it; that takes a tremendous amount of courage…but as we all know, where there is risk, there is reward.  The benefits of doing what you love full-time, whether you ever make millions of dollars or one red cent, are priceless and literally indescribable.  The amount of intangible ways that doing what you love can complement the rest of your life are immeasurable but entirely known to those that have sought out this less-beaten path to carve out their own uniqueness in life.  Doing what you love is rewarding for the soul…and worth all the risk in the world, no matter what it is.

Solid combination of bass, drums, organs and his signature guitar-work start up the rhythm & groove on Marco’s new single, sounding somewhere in between something like The Wallflowers and Dire Straits…just enough of a hint of Americana Rock without giving that secret fully away or making it obvious.  His pace and movement on “This Is Where We Meet” works fantastically in the verse, the chorus takes it up to that next-level in perfect progressions in the writing and performance.  Both verse & chorus have identifiable hooks that certainly have noticeable character and genuine appeal to the ears – you find yourself easily wanting to listen to Marco’s words on this single, because HE sounds invested in every word with the expressions in his voice.  There are a few moments where he chooses a questionable direction or approach along the way…like he’s switching between a few different styles that he can personally sing and making that call mid-line sometimes, resulting in what sounds like a last-second change in direction sometimes to the sound he’s looking for.  That being said, I gotta hand it to the guy, because he seems to get there each time…and some of those stylistically-cool tones he’s got just take a second or two for us to sort out mentally as listeners while we absorb Marco’s ideas & vocals for the first time.  The more you hear it, the more it all seems to make sense.

Guitars, bass, keys & drums, are all rocking reliably throughout “This Is Where We Meet,” with multiple highlights for Marco’s guitar-solos and complementary additions adding a real charisma to the energy in the music while his vocals provide a subtle charm.  Imagery in the words is good, the video to go with it gives a good insight & a visual perspective into potential meanings behind the reflective lyricism as well – and again, when Marco’s at his boldest and his tone is at his most focused, he really puts a wonderful amount of emotion into what he’s singing about on “This Is Where We Meet.”

Not too shabby right?  Marco’s come out of this review standing upright with a solid rock-song that’s got plenty of true grit, character, rhythm and groove…

GREAT QUESTION!  Glad you opened that door for me, you fine people you…let me explain why…

Alright so…truthfully…I’m not all THAT mad at the guy.  At the end of the day, what he’s done – the ONLY crime he’s committed in this song is a stunt that great songwriters throughout time & music-history have ALL pulled at one time or another themselves…so really, he’s keeping good company with this one particular move.  I’m gonna get microscopically specific here for a moment…

Marco makes a seriously significant switch in his approach to one line right before the end of the song, right about the 3:54-3:55 mark (like I said, super specific!) – and THAT moment…is pure audio magic.  So you see why I’m upset right?  We might only get one or two SECONDS of this blissful moment at MAX.  Do I want more of it?  By the BOWLFUL.  Does he give it to us?  NO!  Of course not!  But I suppose that’s what repeat is for ain’t it?  Let’s face it…a lot of our favorite songs or moments in time come down to mere seconds…and chances are, if they were repeated over and over again, they’d lose some of that magic we love.  A good songwriter can always execute a solid hook – a great writer can show immaculate restraint, even in what our ears might consider to be the most golden-honey spot of a song.  So even though I WANT more of it…I get it…and I think Marco’s played it smart by adding one last meaty hook in there that snags our attention firmly once more before the song finds its ending shortly after.

All-in-all, that’s not a bad problem to have, if you can even consider it to be one.  Marco’s done a solid job on “This Is Where We Meet” – you can hear the wisdom & insight in his words and feel the connection he has to the cadence & rhythm in his tone.  Like I was saying from the get-go…it’s a quality tune…”This Is Where We Meet” retains the interest of the ears with ease due to Marco’s authentic approach & high-caliber execution…he’s right into the moment on his new single; and as a result, so too, are we.

“This Is Where We Meet” comes from Marco Cartolari’s debut EP, Shot At The Moon, out & available now.  Find the music & more about Marco at his official homepage:  https://www.marcocartolari.com

Tags: Marco Cartolari Music Video Singles sleepingbagstudios This Is Where We Meet