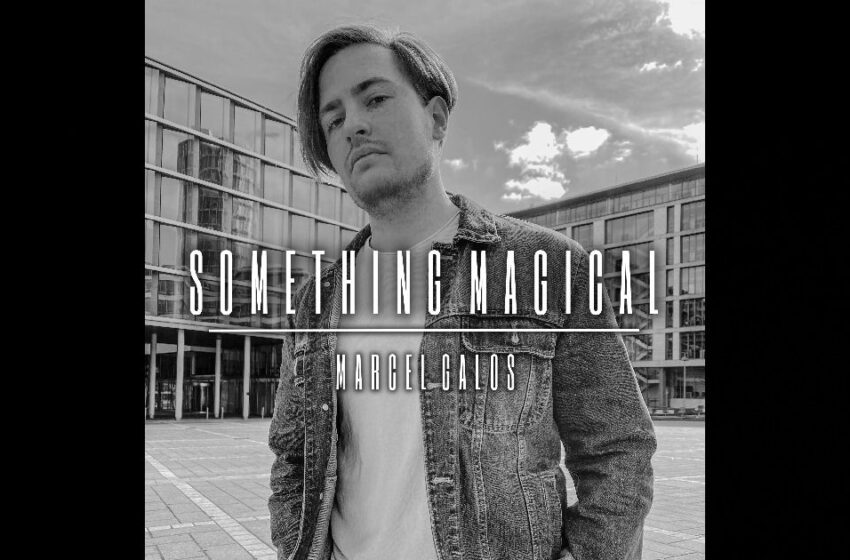 Ohhhh boy…where do I start this?

I think the most important thing you can do as a listener listening to the music of Marcel Galos is to understand he’s a man that likes many things.  With only having the one experience with his songs myself personally, after reviewing his single “Lonesome Whiskey” from last year…and that being a Country tune…believe me when I say, the last thing I was really expecting to hear was him come gunning out with such an electrified-Rock song, which is what “Something Magical” follows the blueprint of to the letter.  Then I started reading his bio again – you know, really starting to get myself into who Marcel REALLY is and what he’s all about – because with two tracks this far apart and that being all that I know about the man, I was wondering if I had any real idea at all about what Galos might be capable of.  The bio went on to explain his penchant for Rock & how it came to be – which was the result of the influence of the incredibly brilliant album you know and love as American Idiot, by none other than Green Day.  Now…obviously not every song is going to NEED that influence, or even reveal it – I know “Lonesome Whiskey” certainly wouldn’t have tipped me off about that before – and in listening to “Something Magical,” the Grunge roots I grew up with kept tugging at me…nagging at my brain, telling me that – nope…it’s not a Green Day influence I’m hearing here…it’s actually something else entirely…it’s…IT’S…

…Hair Metal and 80s Rock – and there’s no mistaking that vibe when you hear it.  That’s what it was!  I was trying to figure out how this all tied in together and make some sense of it all.  If Marcel was willing to literally write in the name of Green Day’s American Idiot as a major inspiration for what he’s doing today (which admittedly, made its impact on him long ago, back when he was thirteen) – it was still almost surprising to hear what’s almost the musical antithesis to that creeping into the vibes of “Something Magical” – it’s just not what you’d expect to find if my assumption was anything close to correct about the roots of the sound being closer to the 80s than it would be the 90s.  Like you’d probably assume a song like “Something Magical” has more in common with Van Halen than you’d think it would with something like Green Day, or much on-forward from there, perhaps with the exception of maybe bands like the Red Hot Chili Peppers or Faith No More to an extent, both of which also have their own ties to 80s vibes as well.  So I dug a little bit further into his music online – and there it was – “Bed Of Roses.”  Before I even clicked it, I knew straight away that it was going to be a cover of the Bon Jovi song from his album Keep The Faith – because OF COURSE Marcel would dig that tune!  It’s not that “Something Magical” sounds anything like Bon Jovi (thank the lord) – and to be fair, I grew up on listening to Keep The Faith myself, though that would be the only one of BJ’s records I’d ever end up truly enjoying – Marcel’s cover of “Bed Of Roses,” again, to be fair, is excellent.  And to me, it was that last piece of the puzzle that seemed to create a much more clear picture of what Galos is all about fundamentally at his core – the dude likes to rock & rock hard – that’s the true reality.  In knowing what I know now & after hearing “Something Magical” – I’d be way more likely to bet on a single like “Lonesome Whiskey” as having been the exception, not the rule when it comes to his catalog over time…Marcel clearly enjoys making music, full-stop – but I think we’ll be much more likely to find him rocking out than rocking Country for the vast majority of what we’ll hear from him over his career.  To be even more fair to Galos – the style of music he’s rockin’ with “Something Magical” might sound a few steps behind in comparison to what’s happening out there in the scene from a North American perspective – but in reality, over in Europe and particularly in Germany where Marcel is based out of, Rock, Hard Rock, Metal, Hair Metal, 80s Rock…all of this is still majorly dominant in their music culture.  Ask any band from here in Canada or the USA that heads over there to play a Rock or Metal show, and they’ll come back telling you that there is no crowd on earth like a German crowd and how truly into the music they really are – so truthfully, everything I hear on “Something Magical” is something I know will fit right into the scene over there in particular, in addition to reaching the many millions of fans around the globe that still revere this style of sound to this day.

Where a single like this pulls me onboard – and quite likely you as well – is purely within the performance, and there’s little to no doubt about it.  If we’re talking about commitment to the moment and the genuine possession of the right energy that suits the strengths of a song…I mean, you gotta hand it to Marcel for rocking the living daylights out of “Something Magical.”  Personally, I loved the fact that you get more & more out of this cut the longer that you listen to it.  He’ll start off in that Van Halen/Steppenwolf/The Kinks-esque rhythm & roll through the verses and even keep it all fairly controlled & on the level throughout that first run through the chorus – but after that point, you’ll hear even more personality invade this song at a rapid pace over the course of its last two & a half-minutes or so.  From smart solos & breakdowns, to vocals that are off-the-charts with the level of energy they possess & the sheer intensity you’ll find…to the overall vibe of the song itself, you can hear Marcel was in the mood to turn up some amplifiers and have a whole lot of fun with making this single.  Regardless of how I, or any of us might feel about the style or sound – the kind of energy he brings to his performance is universally enticing in all the right ways…you might even end up listening to “Something Magical” from start to finish simply to see if Marcel is going to SURVIVE IT!  Because that’s how much he’s givin’ it when it comes to the vocals he lays down with his biggest moments on this single…at the very least, he’s probably gonna need an oxygen tank after all the power he’s put into the gigantic hooks of “Something Magical” – it’s incredibly demanding to sing, and he’s nailed it – that’s the reality here.  Between what I’ve heard on “Lonesome Whiskey” beforehand, and now here in this Rock-infused dose of mayhem & madness – it’s clear he’s capable of thriving in many different styles & sounds…and honestly, who knows what the future holds for him next with limitless options like he’s creating for himself as an artist.  No doubt that he’s a well-rounded musician with skills of all kinds – he’s crushin’ it on the guitar from the lefts to the rights with seriously crunchy riffs and exciting tones searing hot through your speakers – and vocally, he’s knockin’ it straight outta the park.  It’s got just enough versatility in the vibe and aggression in the performance that “Something Magical” becomes much more of a hybrid song as it plays, as opposed to anything that sounds like it was stripped directly right outta the 80s – all I ever claimed is that you can hear the influence on a song like this, and I stand by that.  Besides – y’all play whatever music you truly love – that’s the only thing that ever really matters – and if you play it with THIS level of extreme passion, interest, confidence, professionalism, & seriously wild FUN that you find on Marcel Galos’ new single “Something Magical” – believe me when I say, we’ll all be willing to listen, every time, no matter what it is you might be up to next.

Find out more about Marcel Galos at his official website at:  https://www.marcelgalos.com