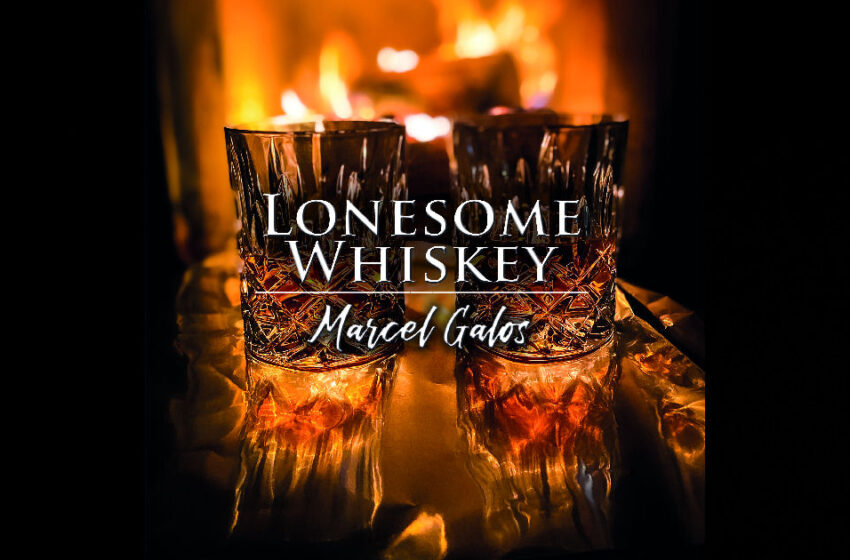 Based out of Germany, finding his way all the way overseas to our Canadian-based pages over here, solo artist Marcel Galos’ latest single is traveling around the world it seems, & for plenty of identifiably good reasons.  From what I gather in reading about the man behind the music online, Marcel is one of those genuine multi-talents…you can find out about his journey all the way from learning classical violin at the young age of only six years old, all the way to where he is now, where it appears he can play just about every instrument under the sun, and mainly in the Rock’n’Roll genre.  Again – for plenty of good reasons – one certainly being, the fact that this dude can light-up a fret-board like you wouldn’t believe when it comes time to crush a solo or two…you can’t have skills & talent like this guy & just let’em go to waste!

When it comes to his most recent single “Lonesome Whiskey,” you’ll find Marcel takes this new tune in a more decisively Country style direction for its overall sound…but it’s really, really tough to disguise how very, very built for all-things-Rock this guy truly is.  Even while there’s certainly a down-home demeanor to the Country vibes he’s generatin’ – the large & in-charge performance he’ll give ya from the microphone unmistakably comes from the kind of performer that can command an arena’s worth of people in an audience…it’s definitely the kind of confidence you most often associate with Rock.  Ultimately, I think that works really well to Marcel’s advantage, and definitely goes on to create a hybrid experience through the inclusion of Pop hooks and a Blues-esque atmosphere in the air as well; he’s really playing within about four or five different styles of music, which makes it much harder to pin this song down as any kind of one thing.  Which again, I think is a huge positive.  I’ve more or less labeled this as a Country tune of sorts, due to how I’ve generally seen it referred to out there online – and while I’d never deny that’s a prevalent aspect of “Lonesome Whiskey” – there are many aspects that define it.  Drawing proudly on that big 80s style of structure, writing, performance, and production – you could probably say that “Lonesome Whiskey” has just about as much in common with Country as does the most focused attempts made by an artist like Bon Jovi or Aerosmith would have…or even an Elton John Rock-medley type-deal…so you get what I mean; you can take the Rock outta the song perhaps, but not always out of the rock-er, you dig?  And there’s nothing wrong with that whatsoever – like I said, I think that’s a huge advantage in Marcel’s music, and that versatility and hybrid sounds are fully where it’s at right now, and having multiple gateways into your music can only ever be a great thing.  It’s the fact that artists like Marcel have the ability to venture into other genres with such confidence that leads to new combinations with the potential to make a lasting impression.  Like, when you listen to the way that Marcel hits the main hooks of the chorus on “Lonesome Whiskey,” you can hear the fact that he’s got all the chops required to go out and nail R&B/Soul just as hard as he does Rock/Country – you can’t buy versatility like that…you can’t really even teach it – you’ve either got it or ya don’t – and he does, 100%.

I suppose what I’m saying is, a song like “Lonesome Whiskey” would have likely come out with a lot less guts & gusto were it to be performed by others – it’s the commitment, confidence, and of course, skill, in what Marcel does that makes all the difference in the world in setting him apart from the rest.  When people listen to “Lonesome Whiskey,” they’ll not only be hearing a really tight, well-played, well-written tune – but they’ll also latch right onto just how much professionalism and passion exists within Galos.  There’s a possible argument to be made that with a sound you can pinpoint to similarities in a specific part of music’s history, that Marcel could be battling for attention with a style that’s a bit less commonly found out there on the airwaves today…but I’d make the opposite argument in return and point to the legions of fans that love this timeless type of songwriting, knowing full-well from experience right here on these very pages of ours that there are so many people out there that would love what Marcel does.  That includes the average everyday listener – and it definitely includes the real dedicated musicians & songwriters out there, who would no doubt have serious respect for his craft & the high standards in his execution all-around.  “Lonesome Whiskey” could have come out tepid – but Marcel really makes this song come alive & gives it a boldness, an audible kick, and a smooth finish…it’s there in the professional precision as he moves from start to finish in his performance, and it’s equally present in the sparkling production that makes this whole cut resonate deep inside ya.  Instruments like the addition of the piano really fuel the heart of the personality & charm underneath the whiskey-laden Country-vibes – and in terms of a finale…there’s no doubt Galos has save plenty of fireworks for you at the end.  In fact, I’d be hard pressed to find a better thirty-seconds-to-the-end in any other song out there that would compare to this one this year – Marcel starts slaying a solo that’s straight-up astonishing – revealing a flash of the chops he’d regularly bring to the Rock arena, and giving the rest of us that are getting their first impression of his music from this Countrified single a quick glimpse of what he’s capable of in a whole different realm, right before the song is over.  Masterfully threaded into the structure, it’s not like all of a sudden the amplifiers & distortion come blaring in and take over – no; Marcel plays this cut perfectly, and what he brings to “Lonesome Whiskey” from part to part, really suits this multi-layered sound & set of vibes he’s rockin’ with.  When he fires it up in the final thirty-seconds to its inspired ending, he flawlessly transitions into its largest instrumental highlights with such smooth professionalism, you can tell that Marcel could do this music-thang he’s doin’ all day, every day…likely even when he’s sleeping.  There’s zero doubt this man can seriously play…like, as in, he’s got chops that’ll blow your minds – and even in this more subtle & controlled, songwriter’s style of crafted musicianship, you can hear that Galos is capable of making those guitar frets & microphones he’s got surge with power & energy, any time he chooses to.  I’d be shocked to find any ears out there that wouldn’t conclude he was born to entertain.

Make sure to find out more about Marcel Galos from his official homepage at:  https://www.marcelgalos.com