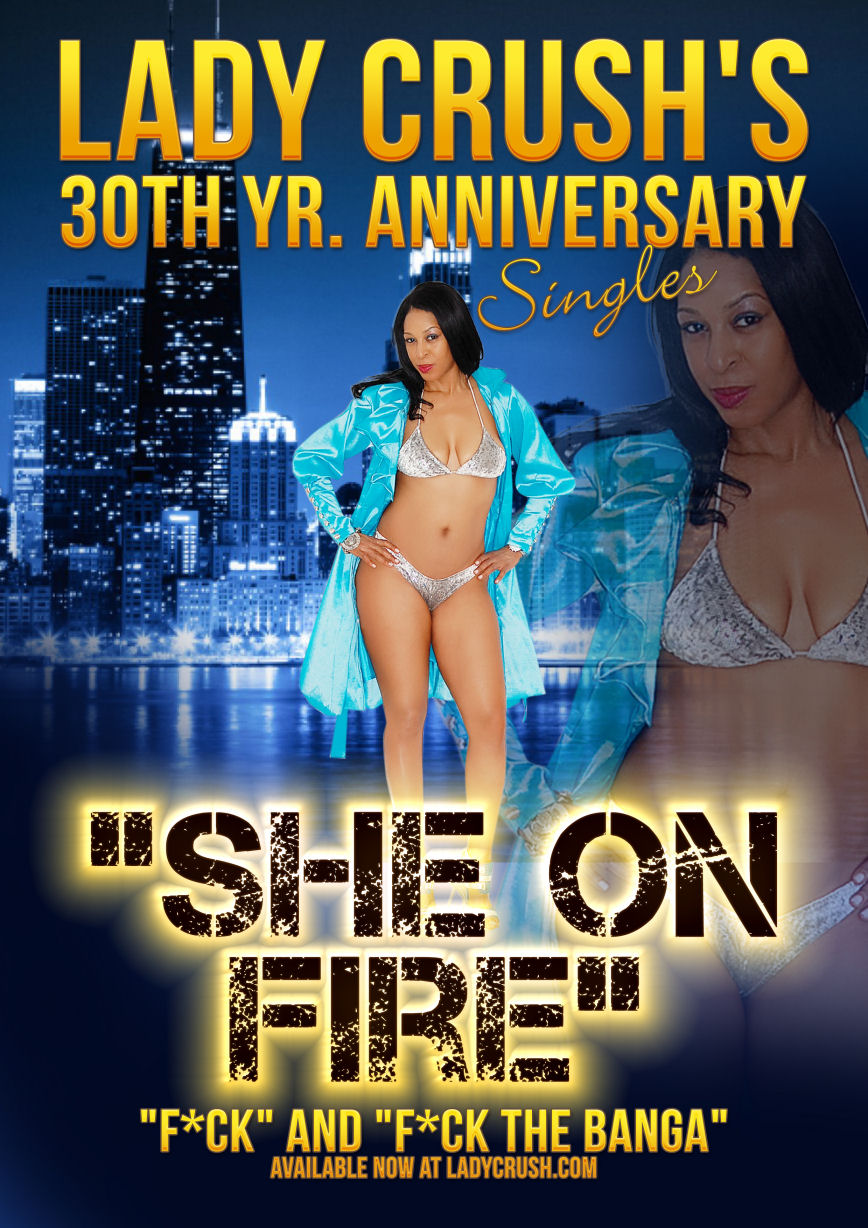 Lady Crush – “She No Lie, She On Fire (Feat. BangaBoy and Castle)” – Single Review

There’s definitely a lot of ways that you can examine this new single.  You can look at it from the Lady Crush perspective of ‘this ain’t for the little kiddies – this is grown peoples talk’ – and that’s one way to capture the essence of “She No Lie, She On Fire” in a nutshell…at least I think?  I’ve never been all that grown-up myself, despite what it might say on my driver’s license…  You could also examine this new-cut as the sexy-single that it’s intended to be…and musically, it moves as such.  Armed with a big-beat and pretty much all of the modern-day music-tricks laid out on one track…it’s hard to ignore that this track roams through ‘adult’ conversations to say the least – that’s real talk for sure.

You could also examine it from the lyrical aspect of these ‘grown peoples’ conversation…in which…you may or may not be satisfied.  I found this part of the reviewing was a little bit tougher on the song…I like the vibe, I like the beat – I even like the rhythm and flow of the music itself…and it’s not the adult-parts of the lyrical content that get to me so much as the rhyme-scheme it clings to that occasionally makes a little less than sense to me.  Some of the words are extremely clever and certainly work to the song’s advantage…but the main hook itself comes out a little dangerously Dr. Seuss-like…it could just be me – I’m a grown-ass man enough to admit that…but it’s still lost on me as to how the main words that punch alongside the beat and rhyme-scheme of the chorus suit the song other than the fact that, yes, they do rhyme.  But…even if I haven’t caught all these correctly…look at this combo:  ‘Nympho’ – ‘Thin Pole’ (possibly even ‘Thimble’) – and yep, somehow ‘Cappuccino’ makes that third beat of the hook at the end of the line.  I still…after several listens have no idea how coffee-related anything makes its way into the lyrics of this ‘grown peoples talk.’  Again…maybe that’s me showing my ancient-age at this point…maybe I don’t know the latest buzz-words or how coffee becomes sexualized…or how there couldn’t have been another word that might have made for a better…well…you know…coffee substitute?

But if you’re a fan of confidence – you’ll love this track on the merit of the way the vocalists handle their verse whether it’s in the confusing hook of the chorus or the verse itself.  The first rap-verse is insanely awesome – and just flies by – I mean, there’s no doubt whatsoever, this dude can seriously get a flow into gear and rap with precision & speed.  It’ll take you a couple listens or more to catch all the words…that’s how fast he’s moving verbally.  You’ll have to forgive me on getting credit to where credit is due here…Lady Crush has enlisted the assistance of both BangaBoy and Castle and I’m not quite sure who is responsible for what here…but I can tell you that they’re all attacking the song with massive confidence and a professional, modern-day approach to the big beat & samples firing-off at full-strength backing them up.

Pretty sure that’s Lady Crush herself at the end in the final verse though…so presumably, one of the three is responsible for the light-speed rap verse at the beginning…maybe one for the beat…and then again, Lady Crush as the anchor on this relay-team of rap-antics ready to bring it all home in the final minute of the song.  Absolutely fantastic sound to her vocals in the verse…she lays this out smoother-than-smooth and completely takes charge on the microphone.  Definitely a fearless warrior on the m-i-c – you can’t deny that Lady Crush brings her A-game to “She No Lie, She On Fire.”

The beat itself is laden with samples that seem to all work well and fit together tightly…up to and including the porn-sounds that echo along in the background of the music…all that works well.  If anything, I’d potentially bring up the vocals a little bit more so old-dudes like me can catch the words just a little bit more…but who knows…if that were the case, I might question more than just their brand of coffee selected!  Hard to say…the speed of those opening verses would warrant repeat-listens in any scenario because they are truly ripping into the mic at a million miles per second…so turning that isn’t gonna help anyone…maybe it’s not volume so much as it might be clarity.  And if that was the argument, it really applies most to the chorus…but it is a little tough on the vocals trying to break through the enormity of the low-end beat.  Lady Crush is plenty clear and rhymes at a much more paced-out method so that you really DO catch every word…it’s again, probably that chorus that needs the most help in this department.

And then that…would start a whole different debate…but one that further serves my initial point by bringing out those specific words that mark the beat and hook of the chorus.  That’s really what comes through clearly…the rest is arguably lost amid the modern-day mix & auto-tuning of the vocals.  Again, could just be me, but I’m on my like, tenth or fifteenth listen to this track and I’m honestly STILL not sure what’s being said there.  So the new debate would begin…do they NEED to be heard – or is Lady Crush working that chorus with vocals intended more to be an instrument?  Cause that would work as an argument…I could accept that somewhat.  It still leaves us with some bizarre choices in words strung together – but at least then we’d understand it’s less focused on writing cohesively and leaning more towards something that just sounds good in the chorus.

Like I said…there’s many ways to look at and listen to this one…and regardless, Lady Crush along with her homies here…have created a polarizing song with a subject that’s bound to spark conversation and debate.  No one is going to feel indifferent about this track…there’s no middle of the road here…people will go one way or the other with it for the most part – but most importantly, it won’t cause silence and they’ll definitely FEEL something about it, for better or for worse.

At least that’s how I see it.  I mean…I could be dead-wrong about ALL of what I’m saying.  This could potentially maybe even be a subliminal-suggestion or advertisement for Keurig or Tassimo…who knows?  The only thing I’m sure of right now is that my own coffee cup is reaching the bottom…and that it needs to be refilled.  I’m just not sure if I would have drawn to that conclusion myself soon – or if this new cut from Lady Crush put the idea in my head!

Hard to say which might apply…but these definitions from the ol’ urban dictionary may or may-not help!  http://www.urbandictionary.com/define.php?term=cappuccino

And you can find out more about Lady Crush right here at her official site:  http://www.ladycrush.com/

Tags: BangaBoy Castle Lady Crush She No Lie She On Fire Singles sleepingbagstudios