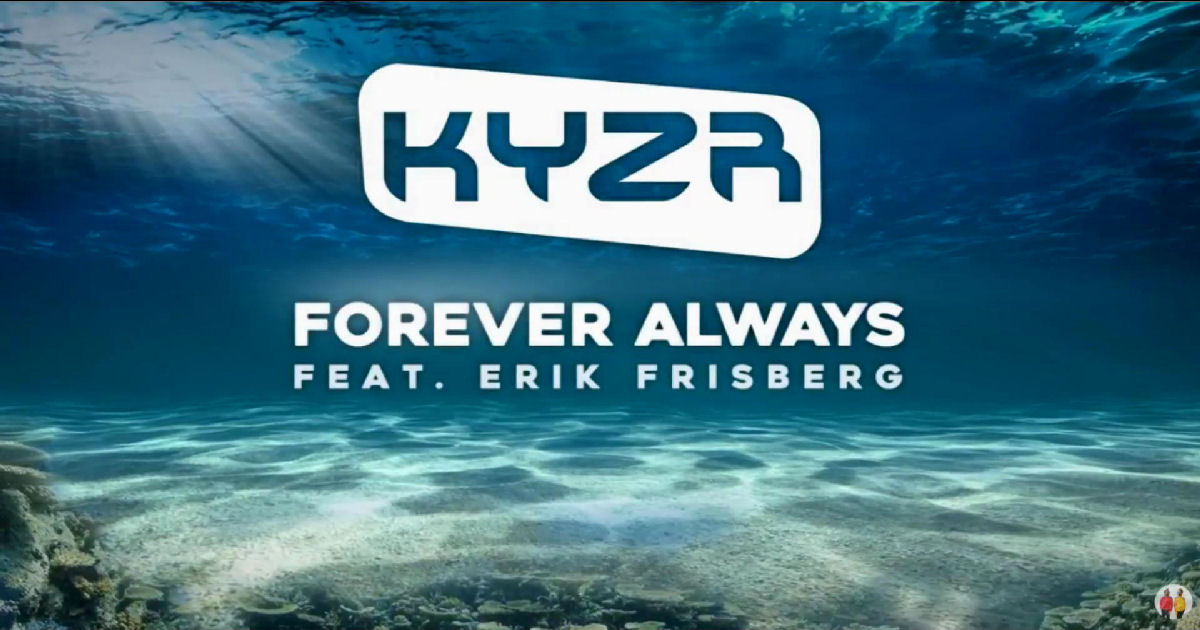 KYZR is back in the house!  Dig what this crew does…I had a chance to check their music out for the first time in a review of their single “Night Vision” earlier in July this year, along with the one-minute animated videos they’ve got supporting their tunes.  All-in-all, it was clear that the Electro-Pop duo of Stefan Thomas & Marcel Julius were putting a lot of thought into their music & career and approaching it all from insightful new angles that were carefully designed to entice people in to listen & watch for stunning entertainment on multiple levels.

And just like last time around, they’re finding excellent ways to do it all once again with the release of the new single “Forever Always,” assisted once more by Erik Frisberg on the mic & giving a voice to the music.  KYZR is reaching deeper on this new single – still shiny & bright in the melody-department, which you’d expect from the band, but also diving into powerful emotions underneath its shimmering surface that go into themes of love & loss.  With the upbeat sound and insatiably groovin’ bass-lines kickin’ it throughout “Forever Always” – it might take a spin or two to realize the lyrics reflect on more than you typically find in a Pop song of any kind.  Overall, if you’re hearing this like I am…you’ll hear that KYZR probably has just as much in common with early 90’s Pop/Rock as they do with Justin Timberlake on this latest cut.  Follow me down the rabbit hole for a second here…but those of you that know the music of say like, an artist like Robbie Nevil or band like Scritti Politti from back in the 80’s/90’s – you can hear the instrumentation & passion so clearly in the music of that era, which “Forever Always” seems to bring back & celebrate here.  Frisberg puts in the Timberlake-esque aspect to the sound on the vocals with a brilliantly versatile performance that is actually quite complex & demanding to sing; he pulls it off extremely well, displaying range & control and delivering the heart & soul required to make this sincere.

Side note – I’m just saying…if KYZR was to do a cover of a track like Robbie Nevil’s “Just Like You” – that could end up being that viral boost they’re looking for…they’d want Frisberg in that equation as well; the slight hint of rasp he gets every once in a while would be the perfect fit & energy to match the vibe.  Could be just the right song that was a ‘hit’ before, but not the insane kind of hit where it couldn’t be touched by anyone else…KYZR could probably bring that song out better than anyone else out there.  Just sayin.’

Anyhow.  “Forever Always.”  Perhaps the best thing I can say about this new single is that it’s got a lot of meat on the bone…it’s not Pop that’s gonna wear out quickly so much as it will grow on you more over time.  You still get some incredibly flashy sounds & stylistic moves from KYZR – that’s a signature ingredient in their music – but the structure & design on this cut really does harken back to a time where composition and songwriting were more of an important part of the overall focus.  And if we’re being truthful – that’s an audience that’s…umm…narrowed a bit over time, let’s put it that way.  “Forever Always” is more demanding on listeners in that sense, because there are multiple parts & a more complex flow that stitches each new & shiny part together to the moments before.  So it becomes more of a song-within-a-song effect, whereby there will be some parts of “Forever Always” that are an automatic given for the ears to accept; other moments where KYZR is asking you to dig deeper as a listener and really absorb this entire song as one larger concept, as opposed to each piece as it plays.  Ain’t gonna lie – sometimes that can be tougher on the average everyday listener; there’s more art & craft in this Electro-Pop single from KYZR than the masses tend to immediately accept…but, it’s the kind of song that does continually grow on you the more you hear it.  That’s when moments like the breakdown around the 2:20 mark and the magnificently inspired verse from Frisberg afterwards start to really stand out, or how the guitars in the distance contribute to the sonic depth of what you’re hearing, the production & effects on the lead & backing vocals…the eventual empowering vibe that this song finds by the end is certainly also to be mentioned as well.  In fact, it’s the very ending of this tune that might be the very most important part of understanding what this song is really all about at the core of its DNA…it’s really about knowing someone is physically gone, but understanding that relationships, thoughts, feelings, and emotions carry on long after…and that sometimes, we can feel even closer to certain people we’ve known long past when they’ve left this world.  And I think if you think of that in relation to your own life & experience, if you’ve ever lost someone you love, be it family, friend, lover or other – many of you out there can probably relate to the feeling that these people never truly leave us.  They haunt our lives & memories in their own beautiful way, “Forever Always” – and as a result, they always live on in our hearts & minds.  Why I like the way they end this song on such bold tones, is because it’s like they’re echoing that first moment where you realize & accept that such a thing would even be possible…that you could still feel the presence of someone that’s gone impacting your life in the present without them there to share their guidance or love.  But once you DO realize that something like this IS possible…it’s far beyond something you ‘know’ anymore – it becomes something you truly feel & your soul seems to understand on an entirely different level…and it’s an empowering feeling without question, which is exactly what I feel like the final moments of “Forever Always” gets so incredibly right.

You definitely can’t find fault in what KYZR is up to on this new single.  As far as its design & ambitions are concerned, they’ve found a way to bring their songwriting soaring to a powerful new place on “Forever Always” that sounds stunning to listen to.  I have no doubt that it’ll probably take a spin or two in order to really get across the full scope of its message…but that’s the advantage that KYZR has over so many others out there – they create hook after hook capable of pulling you right in to listen at any time.  Overall, I feel like “Forever Always” adds more depth to the bright sounds of their Electro-Pop and expands their catalog of songs online even further towards a more thought-provoking set of emotions that people will really connect to.  It might take a minute or two longer to establish that connection this time around – but ultimately it feels like every move they’re making on this track is such a strong step forward that they’re guaranteed to hold on to that connection with their listeners “Forever Always” once they’ve got it.  The music is 100% on-point, spectacularly arranged & produced, Frisberg sounds fantastic once again, it’s another solid tune for KYZR & a pleasure to hear these guys reaching for more.

Find out more about KYZR at the official pages below!