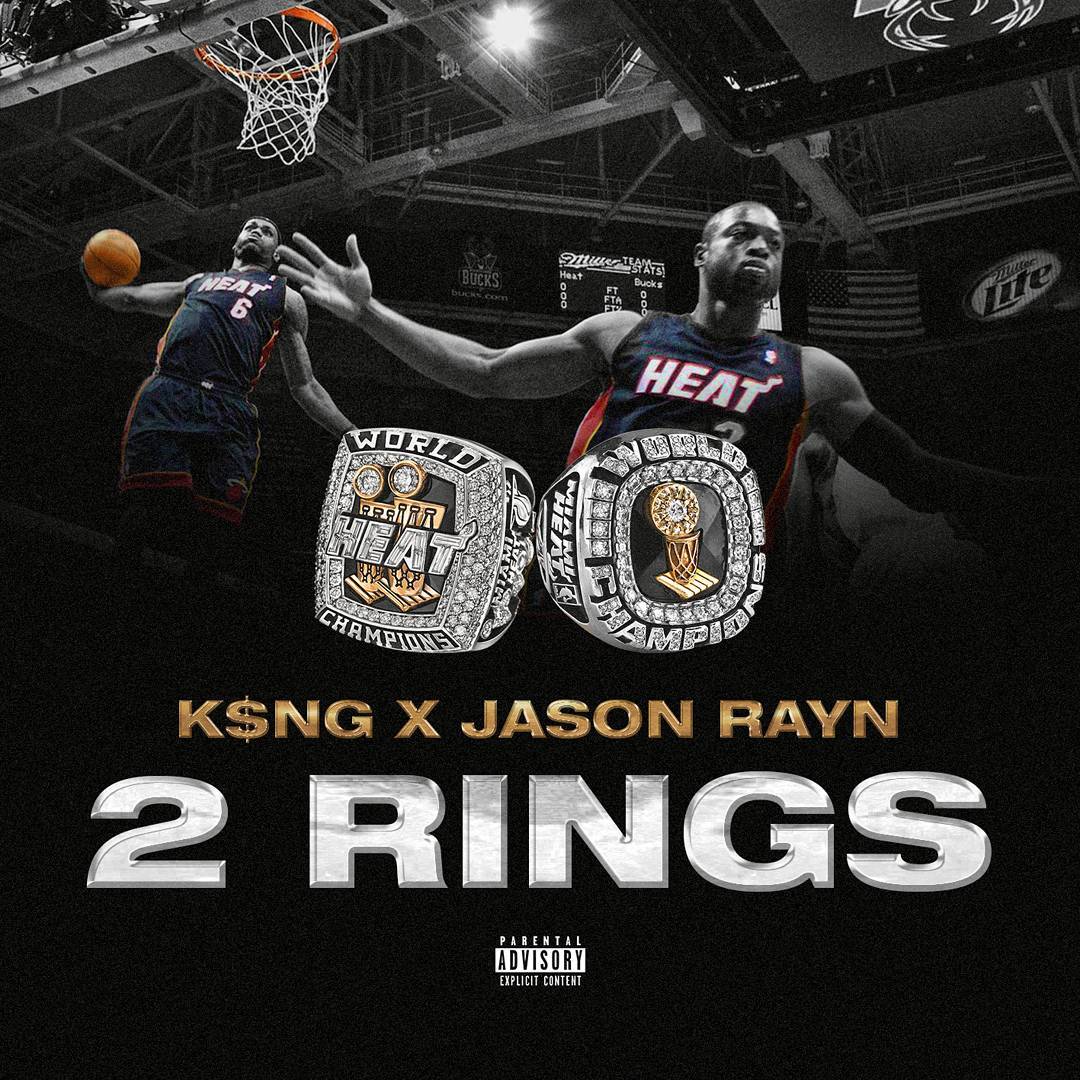 It definitely has nothing to do with these two guys running out of sounds and ideas…the combination of K$NG X Jason Rayn definitely have no shortage of those.  And it’s not anything to do with the confidence on the mic or the writing of the parts…they’ve got plenty of that too.  The 2 Rings EP in general, packs in a lot of entertainment and great ideas into five tracks…hell of a lot of skill too really.

But it comes down to what becomes a critical miscalculation in the production that costs these songs and this EP the impact that it deserves to have made.

I’ll admit to never having gotten the ‘random shout outs’ overtop of a track to begin with…so there’s that…certainly worth keeping that in mind – but also take what I’ve got to say with a grain of salt.  Here’s why…and it’s revealed right away on the first track “2 Ring$” – listen to the impact of what happens to the music as a result of having the enormous shout-out in those first moments of the EP as it begins – the mix on the music comes out so much quieter than that one moment.  You gotta ask yourself as an artist or combination of talent if you’re making the right choices for a song in this particular situation…and ask what’s more important – the thirty second shout-out or the other two-plus minutes of song to follow?

I’d be less frustrated with it perhaps if the rap-verse didn’t sound so incredibly STRONG.  The beat is solid – but the verse is sickly-strong as steel!  Because of the mix/compression that gets applied to the track, the vocals end up being buried and the beat is even at a muffle in comparison to that initial shout-out.  It’s the kind of mix that has you thinkin’ – ‘C’mon man…for real though?’  You can call me crazy all you’d like to – I think verses as strong as what I can hear buried in “2 Ring$” deserve to be in the spotlight, not in the background – but that’s what happens as a result of the choices in production.

The exact same result happens at the beginning of “The Winning Team” – and I’ve gotta admit, I just don’t get why it’s a necessary ingredient when the rest of what K$NG X Jason Rayn bring to the table is all-aces.  Anyone?  Feel free to ring my hotline and explain why a sound that takes control over the overall mix this much when it’s a fraction of the song to begin with is something that an artist would want…because I really don’t understand.  The exemplary skill shown in the rhymes of “The Winning Team” is stronger than most crews can even muster…but with the beginning of both these opening tracks on 2 Rings it’s almost like they’re attempting self-sabotage.  Their talent deserves a proper-mix…I just can’t buy into the idea that people would want to continually have to turn their music up/down within the mix of a single song, or have to worry each time that the track changes that they’re about to have their speakers blown.

Even though “All Week” doesn’t start with the spoken word like the other two, I still noticed that the music was mixed at that same volume…and sure enough, just around the corner – there it was…the overblown mic shout-out.  Gentlemen…I maintain…this isn’t adding to the music, it’s a minus play.  Everything else in the music sounds like it is tighter than tight…the verse is skilled & slick like the rest, the chorus is intense and keeps the energy flowing hard.  There’s not even a debate to be had about it though – every song I heard right now could all become the huge-ideas and sound that they’re supposed to be simply by making that initial spoken-word shout-out come down in the mix and bring everything else back up to where it should be.

Ahh.  I see how it is.  You think I’m just old, crusty and out-dated…not up on my new-stuff enough to know what I’m talking about.  That’s fine.  You keep on listening and when things even-out impressively in the mix of “I Made It” let’s talk.  There is an incredible difference in the mix of the final two tracks actually…and that might point to something along the lines of earlier work & newer songs combining on this one EP…though I can’t say that for sure.  The evenness makes ALL the difference these two needed to truly get their music to a successful-level for listeners in my opinion…”I Made It” is audible confirmation that K$NG X Jason Rayn are more than capable of handling the boards like LeBron hunting down a rebound.  The trade-off vocals between the hook being sung and the verse flowing with passion – it all works perfectly here…and these two expose themselves as the professionals I’ve always believed they could truly be in their music by resisting the urge to get their shout-on and letting the music/performances speak for themselves.  These two are a force to be reckoned with when they get it right – that’s no joke; the rap is always spot-on and the singing has been exceptional in the hooks throughout this record.

Because if anything…I certainly appreciate being left on a high-note that makes me want to repeat the experience no matter what happened or what I heard along the way.  To do that…you’ve gotta continually be raising your game throughout the sequence of songs…and K$NG X Jason Rayn make that magic happen by pulling-up as the shot-clock was running out to swish the winner with their final track “Picture$.”  THIS…this is the mix they want to be going for.  Everything about the sound on “Picture$” packs the right amount of dynamic punch that it should…and the combination of real soulful R&B flavor into the chorus worked wonders on this track.  It all fits perfectly in the mix, everything is crisp & clear and an indication that this collaboration is working hard both in-front of the boards and behind’em to refine their sound…because you can really hear the improvement and progression of this material as the EP plays on.

So it’s up to them as far as I can tell.  The more serious they seem to take it, the better they sound.  I think every song on the 2 Rings EP showcases wicked talent and great ideas in modern-day hip-hop…and I think as these two continue on, they’re just going to get better and better as a collaboration of talent.  Good start here, but I’d absolutely bet on there being even better to come out in the future of K$NG X Jason Rayn.