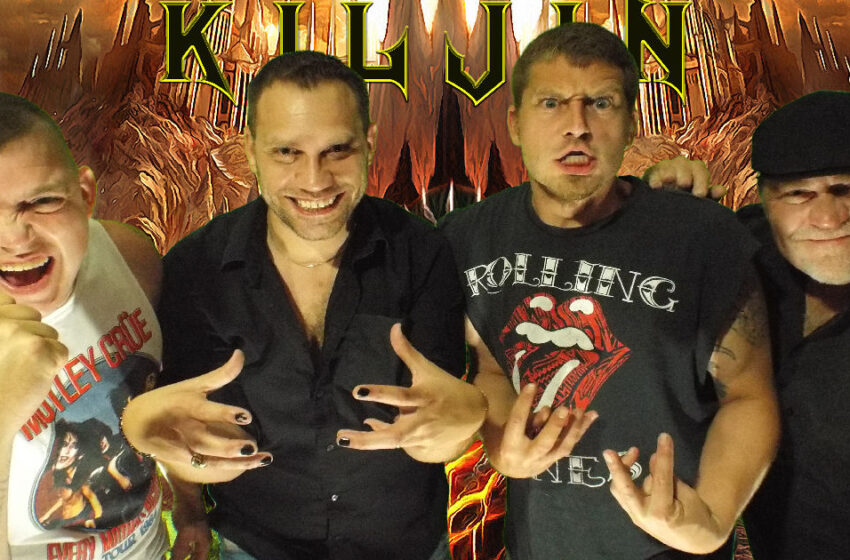 Let it be said, when I go, I’ve specifically asked to be cremated, have my ashes loaded into the hollow barrel of the body of an acoustic guitar, and then have it smashed to pieces in one final puff of soul-smoke & glory to finish my story.  But KILJIN has got me re-thinking all this.  After watching this video for “I’m Still Alive,” I’m realizing now, that it’d be verifiably much more badass to have some dude play drums on my coffin along with a whole band jammin’ out wild Metal solos & thunderous riffs & amped-up gnarlyness on top of my grave moments before I’d be livin’ six feet under for the rest of eternity.

LISTEN.  Believe me when I say, you can sense the enthusiasm, excitement, and buzz growing around this Michigan-based Metal band KILJIN – you’ll see it leap right off the pages of their social media in posts surrounding their new record Master Of Illusion, you can hear it in the inspired attack they’re laying down in their performance – and good LORD can you see the monumental effort they’re putting into their music & career with the video for their lead-single “I’m Still Alive!”  This thang is straight-up like a movie y’all – you get nearly ten minutes of solid wall-to-wall kickassery goin’ on here to watch & listen to, all taking place in a graveyard setting while the deadly sound of KILJIN comes out with gripping intensity to haunt your bones at the same time.  Not only do they have a savage Metal sound that’s guaranteed to find an audience – but this band is clearly putting in the WORK to take their music straight to your face wherever you are – a video as rad & involved as this is SHOULD BE NOTICED – and thankfully, you can see that it has already been getting plenty of love out there around the internet since its release.  I’ll tell ya this much…you wouldn’t see a band like KILJIN put in this much effort & having this much fun onscreen, or sounding this invested into each and every second of a mammoth nine & a half-minute-plus long tune if they didn’t 100% believe in the material – these guys come out large & in-charge with resounding confidence, crunchy riffs, and killer vocals – they’ve got a wicked video supporting “I’m Still Alive” – check it out below!