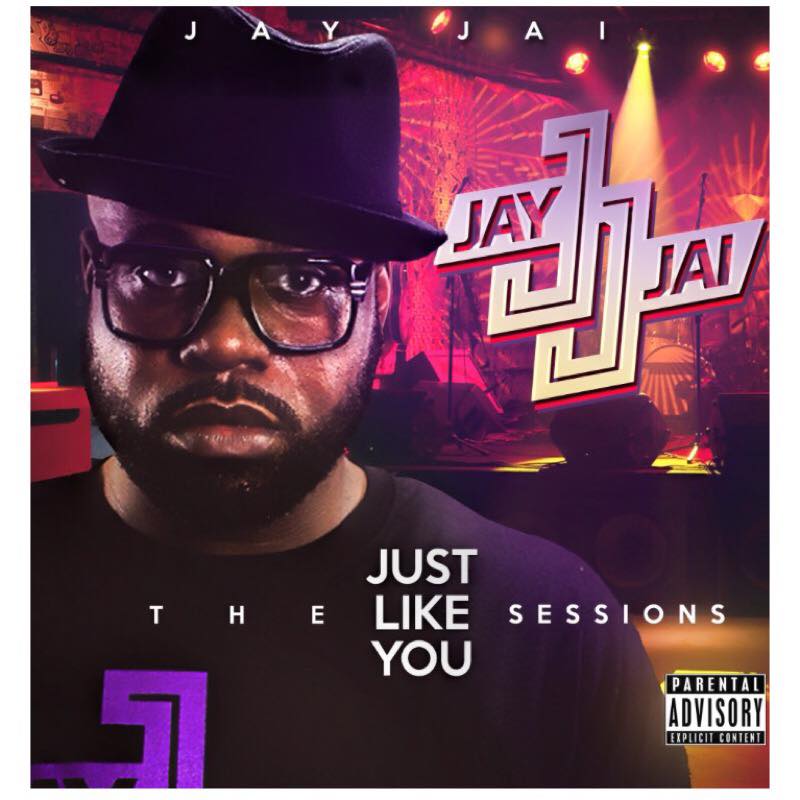 Jay Jai – The ‘Just Like You’ Sessions – Album Review

J-day! J-day! J2 the sequel…double-J’s in review today courtesy of Jay Jai on our homepage today – if you were with us earlier this afternoon then you’ve had a chance to catch up on our thoughts on the Backseat Diary EP – and personally I think it’s going to be interesting to check out how this artist has continued to develop and push his career to the next-level with The ‘Just Like You’ Sessions. Expanding on the ideas and atmospheres he began on that last EP – aside from one MAJOR BONE I’ve got to pick with Jay Jai that I can see right away before I even start to listen (we’ll get to that I promise ya) – it seems he’s already taken the steps necessary to build & improve on his past work and ready to step into the spotlight on this full album.

I mean…I think you can hear it INSTANTLY when you listen to how this opens. “Father Pray For Me” is an excellent opening once again to the experience of Jay Jai – this is a seriously uplifting sound & beat and the assistance of Thejenaem adding vocals was a smart move – this song sounds tighter than tight and it’s unique to anything I’ve heard from Jay so far. A combination of spoken word, samples, vocal effects and a melancholy string-sound backing the melody – the subject matter is tough-stuff but the attitude is still entirely hopeful. Excellent way to begin The ‘Just Like You’ Sessions – “Father Pray For Me” ends on its highest notes perfectly.

Last time around when reviewing the EP, I ran into problems on the second track…nothing massive, but a few things I felt compelled to point out. This time around…”We Are” is the second-cut…and while the overall performance and production is still top-notch, it wasn’t quite a sound or song that resonated with me personally. It’s interesting to me…this whole enigma that IS Jay Jai…it’s like he’s got R&B in his soul but rap on his mind. When you hear tracks like “We Are” and “Da’ Illest” you get a solid-dose of his abilities as an emcee in different styles…but…well…is it just me or do you miss the R&B/melody-guy that JJ can be when the rap comes into play?

Because I’m hearing a song like “Love Letter” and I’m telling you Jay…I might look like a forest troll, but I’m no dummy – “Love Letter” is absolutely single-worthy. And I’m not saying that there’s not talent in the rap put out in the tracks before…because there is…but…well…Jay – wouldn’t you rather be making THESE kind of songs? Not only is it an incredibly well-written song, but the performance is emotionally powerful and really shows a different side of JJ that we know exists through the EP before but have really yet to see or hear so far upon “The ‘Just Like You’ Sessions.” I think there’s both talent and uniqueness in what Jay brings to the table through his more Pop/R&B-infused tracks that is clear for all to hear…on the rap-side of life like on “M & H” – my main worry would be whether or not he’s made a jam that will set him apart or help him standout in the sea of sameness. I dig the low-growling vocals and menacing sound & minimalist style of “M & H” but at the same time I’m not quite convinced that this is a cut that will grab the attention with a firm enough grip…and especially in the tough-spot of coming after “Love Letter” and before the completely fun “You Don’t Know Me.”

“You Don’t Know Me” was what I felt was a great example of JJ combining the two hats he wears through rap & more melodic & rhythmic songs. Though it’s still incredibly minimal as far as the ingredients to the recipe are concerned – the vocals come out completely expressive in both lyrics and sentiment. The rapped-out verse is viciously effective, spit with a serious venom in an all-out performance that sees Jay hold nothing back and the chorus packs in a massive set of hooks; both parts are quite different from each other, but the resulting combo is highly memorable and incredibly catchy. I was happy to see this one also get a radio-edit/bonus-cut at the end of the album to give it a chance at hitting the airwaves where it belongs. ”You Don’t Know Me” is both light-hearted & serious…the contrasting elements work really well together and JJ proves he can be just as menacing and passionate in his rhymes as Kanye at his most fierce.

That being said…another real highlight for me was the performance to follow on “Luv Are Love” where the vibe gets chilled right out and this song rolls along like you’re sitting on the pillow-cushion seats of a ’64 Impala cruising down the strip. Both the music and the performance switch between tightly-controlled and letting the beast right out of the cage – another smart contrast in sound here for Jay on The ‘Just Like You’ Sessions. Again…in my humble opinion, it’s stylistic moments like this that seem to sound the best to my ears when it comes to Jay’s music…I dig the rap, I just dig tracks like these a little more…that’s all I’m saying…put down your pitchforks and torches, no need to get rowdy.

Wouldn’t you know it! The one track to make it from the Backseat Diary EP to the full album was the one that was (and STILL is) marked with ‘(The Single)’ beside it. Now here’s where things get a little tricky…because I’m sure some of you still remember way back up at the top of this where it all started how I had mentioned having a bone to pick with Jay Jai…and I DO. Because as much as I was happy to see “Remember You (The Single)” make the full-album cut…

…it left me wondering where in the all-hell is “Us” dude! REALLY man? In my opinion…that’s a strange-ass call yo! “Us” was a phenomenal cut from the Backseat Diary EP…mind you, it didn’t come with a ‘single’ label on it, but how it got passed over for this full-album with NINE songs on it eludes me for all I’m worth. DUDE! WHERE IS THE LOVE BROTHER? I mean…ten is such a wonderful number for symmetrical, ocular and audibly-tangible reasons…I’d say it was a crime if we didn’t all at least have access to it on the EP!

But…ummm…yeah…*cough*cough….ahem…what I was saying was that “Remember You (The Single)” was a great song to have chosen for the full album…it is…I’m just surprised it was only the one song to make it over is all…trying to get over my shock is all…it’s just me people…not likely to affect you, nothing contagious…move along now, let’s go… Hit up that radio-edit of “You Don’t Know Me” as you head over to your playlists to make sure this whole thang repeats and The ‘Just Like You’ Sessions continue long past dark and the sun is back on its way up. There’s a lot here on this album; Jay Jai has certainly proven to me he’s a wicked entertainer and has no problem captivating my attention through his creative compositions…he’s onto something here and I think over time we’ll see JJ continue to innovate and find new ways to bring music vibrantly to life through his own unique style and widespread perspectives.

Check out Jay Jai at Spotify and have a listen for yourself here: https://play.spotify.com/artist/7z0jzNOyqN1aEZ0hFlyRxE

Tags: Album Jay Jai sleepingbagstudios The 'Just Like You' Sessions