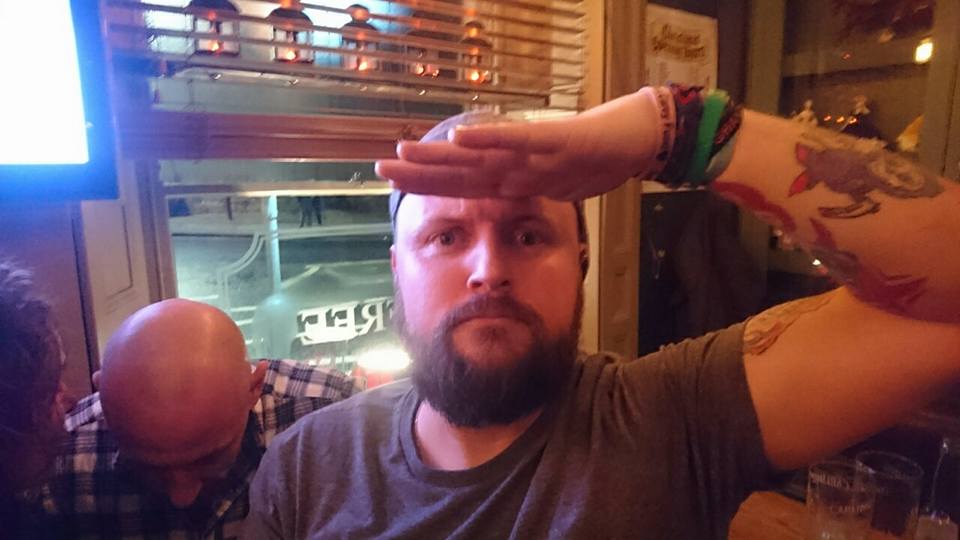 This month at the homepage, interviews are being sent out all over the place.  We’ve sent out a bunch this August and we’re gonna keep that roll going strong throughout the rest of 2017 for ya with a bunch of 10-question interviews that are the same for all, so we can see/hear/identify what those common threads between us all in music really are and get to the bottom of what’s happening out there in the independent music-scene right now from the perspective of the artists & bands in the thick of it all.  Check out life in music through the eyes of Jason Vare’s solo-music as Shagpile…his music in the duo of We Steal Flyers…the music he’s making in the band Growing Robots…you get the idea – this guy has ALWAYS got something going on!  Find out what’s happening for this endlessly busy, wonderfully charming & creative musician this year in 2017 below!

Jason:  At the moment it’s a pretty exciting time here for Shaggy and the Shagnut Shack! I’m currently working in the studio on multiple projects. The first being the new ‘We Steal Flyers‘ (acoustic duo) album which is always fun and will be out later this year, I’m working on a new covers album for the second series in my ‘Under The Covers’ Solo albums and also writing and recording songs on the first full production band album for my band ‘Growing Robots’ which is a 4 piece of lovely lads. On top of all I’m that playing more live shows than ever and We Steal Flyers and Growing Robots gigs are coming in fast for next year. It’s looking like it’s going to be a very busy year in 2018.

SBS:  What’s your opinion on the current state of the world and are politics influencing or getting in the way of your music at all?

Jason:  I believe the world needs a little help for sure but I try not to involve myself in any political matters online or in public. Music pretty much rules my life and at the moment we are doing more than we have ever done and progressing as always!

SBS:  What’s been the highlight of 2017 for you and your music personally so far?

Jason:  I would say being able to work with the two wonderful companies that endorse me and my solo music career. I’m currently endorsed by Tanglewood Guitar Company and Sfarzo Guitar Strings from the US. You get a huge smile and boost when such large company’s recognize your music and the work you put in everyday as a songwriter/musician and offer to help in whichever way they can.

SBS:  Name two independent bands or artists out there we should all be listening to & tell us why.

Jason:  Martin Stephenson: A wonderful acoustic player/songwriter/performer who has one of the biggest hearts in the music business! He has been everywhere and done it all over and over and now chooses to be independent in his music and loves to show his support to smaller indie musicians in their musical lives.

Paul Liddell: Again an amazing player/songwriter and friend who gigs relentlessly and is a complete wizard at perfecting his live performance.  His albums are an amazing collection of songs which are originals and produced to an amazing standard on his own. This lad pretty much has everything going on! He has the voice, the songs and the passion to drive them and works harder than any musicians I know.

SBS:  What is your favorite stage to play on in your city right now – what makes it perfect for you?

Jason:  In my own little town I would have to say that the all new ‘Platform 1’ venue which is a whole new build with an amazing stage and setup for full bands and it’s all supported by the lovely community and local council where I live. If I had to choose in a city it would be ‘Newcastle’ and I would say the 02 Academy which we have a headlining gig coming up there soon as ‘We Steal Flyers‘ on the 1st September this year. I do also have to add though… I absolutely love playing our lovely small village halls around the country to a nice small number of people too. These can be great fun and this year we have ended up in quite a few.

SBS:  Where do you think your music is best received by the people and why?  As in…do they connect to it most through the audio recordings, videos, live-stage…where do you feel you have the most impact and make the biggest impression and what makes that the best way to experience your music?

Jason:  It is always live for me. You can connect and adapt to people in a live situation especially in small bars, clubs and venues. It has a much more personal impact with people in smaller gigs and shows where you can let them in and make them be a part of a show. The live gigs are always different even returning to the same venue you have already performed in many times and people can keep a little bit of that magic to take home and remember forever.

SBS:  Where do you personally think your own music has the most room to improve or expand and what steps are you making towards getting the results you’re looking for?

Jason:  Music is a huge learning curve in every way! I don’t think I will ever stop learning and wanting to learn more. Not just in my instruments, but being an independent musician there is so much to work out and take lessons from though out your career. Only yesterday I signed up with a great American company of like-minded musicians who help to push each other along the way and build on self-promotion skills and networking in the wonderful world of online PR.

SBS:  What’s the most memorable moment you have from a live-show or tour?  Tell us a story!

Jason:  There is so many to choose from along the way and over many years of touring and gigging I don’t think I could actually choose one actual moment. This year alone has had so many great things happen already.  I think one of the greatest moments as a whole and as a songwriter though has to be when your own music you have created from scratch, up to a live polished song you perform connects with people on a level way above most gigs. Something in the song grabs them and magically takes them off into an almost spiritual listening place and you become completely connected with the audience. The venue, the people, the instruments and the music all come together to make a perfect combo of something you can’t explain! That’s what we search for as creative musicians I believe and I’ve had the honor of that happening in many different ways! A big ball of ultimate connection where the song becomes not yours own, but the moments and everyone that’s in it!

SBS:  What’s the key factor that drives you to continue making music and how does it play a role?

Jason:  I think it’s just part of my DNA. Its built in me and I don’t have a choice. If I was never performing live again I’d still be creating and writing songs. I love it more than Marmite.

SBS:  What do you hope that people hear most inside of the songs you create?

Jason:  I’d love to tell you but then I’d have to kill you! Hahaha… Nahh just maybe an insight into my life a little and hear a humble musician that wants to share stories with nice people who want to hear them. My life is grand at the moment and I think music has the power to do so much to help other people. For me music clears my head, lifts my spirits and can heal my heart. If I can create something that does the same for others then … my job is done and it’s a good one! Thank you for the very kind interview and may you have Amazing Adventures Always!