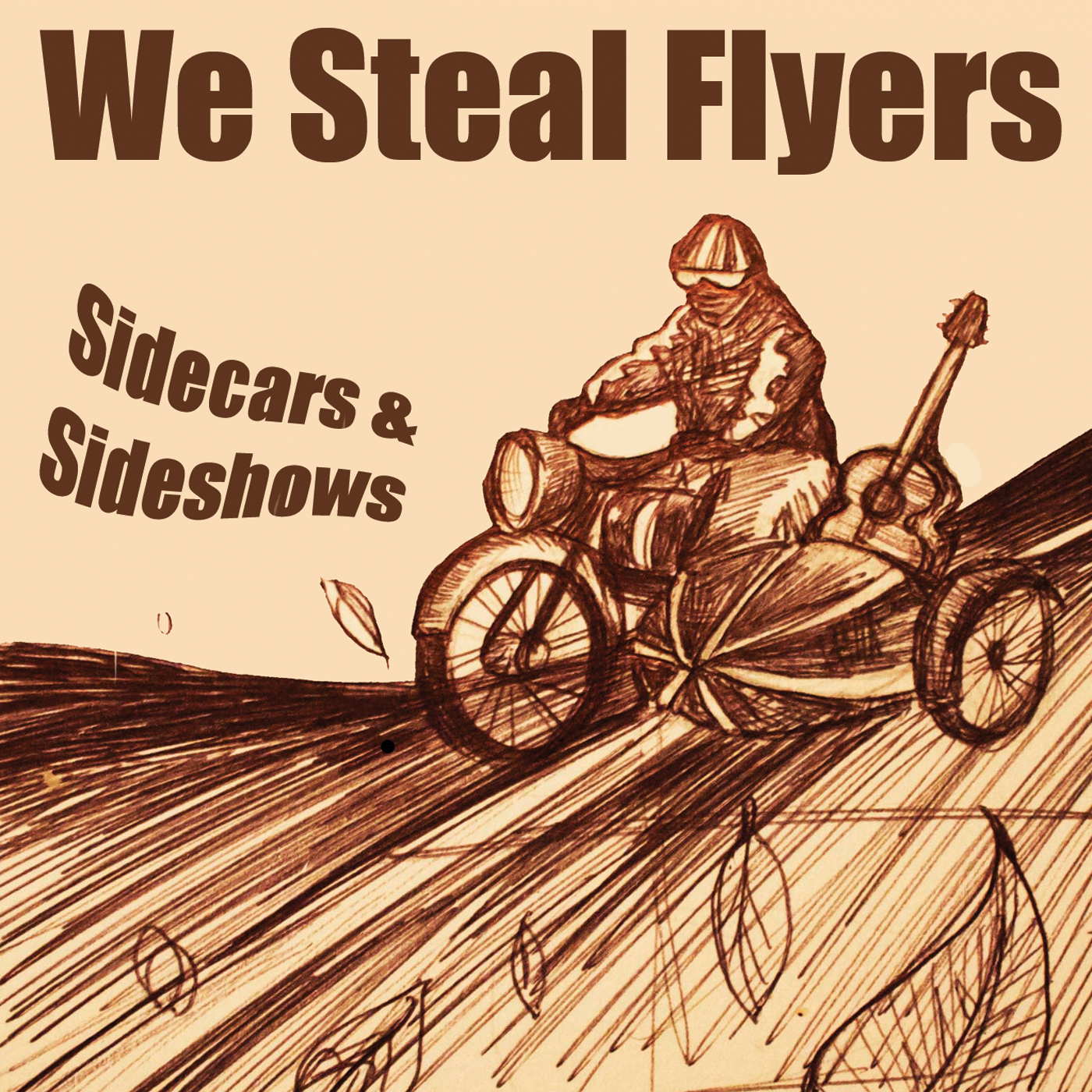 I have to admit once I had read the name of this band I had a completely different impression of the sound of We Steal Flyers and their music already buzzing inside my head. I envisioned young punks taking posted information off of telephone poles back to where they make their music and re-posting it in their jam space – which in my mind now looked like scrapbook on the walls in the picture in my mind. I’m not too often wrong in a quick “name assessment” of a band regarding which style of music they play – but in this case I certainly was. We Steal Flyers, I can declare, are officially NOT a punk band – hell – not even “hard rock!” What a pleasant surprise…..

Upon pushing play I could tell I was in for something a lot different than I find being sent to us on a regular basis from our hard rock town in Vancouver, BC, Canada. The city itself might not like to be referred to as a hard rock city – but facts are facts – this is what we are and this is the music that holds this city together. So closing my eyes and just listening to the music, my mind drifts to a dreamlike place full of simpler times and unique surroundings the likes of which I’ve yet to see.

Always looking for a personal relevance in any music I might listen to – this singer/songwriter duo from Northumberland in the UK has me really appreciating how simple it can all really be – that true songwriting stems from the heart and nothing more, with our brains and vocal chords being our first instruments. I begin to forget my first-world problems that continually plague my beautiful home in sleepingbagstudios and slip into a place where there are no cables or wires, no computers and no hum from the amplifiers. “No alarms and no surprises,” as the great Thom Yorke of Radiohead once stated… I’ve been debating leaving North America completely behind in this past month of reviewing and listening to this album and this music and the feeling I get from it are telling me in a very strong voice that a change in this direction might be what I really need.

Welcome to Sidecars & Sideshows – the new album from We Steal Flyers. I mentioned it has quite the atmosphere right?

It truly does. It’s a strange but welcoming atmosphere in the sense that it feels so isolated, yet so inviting – so very wanting to be heard and enjoyed by others; a style of music that wants the people involved and a crowd to gather and sing along. From the moment of the album’s introduction on the short opening track of “Sidecar” you can already get that feeling – it’s instant. As a first track – this is nothing short of a genius way to start the album – a quick decider that really gives an accurate glimpse into what these two are capable of.

Lyrically these two from We Steal Flyers have continually impressed me more and more as the album goes on. This songwriting duo of Derek Allan and Jason (Shaggy) Vare completely belong in the company of some of the truly great folk artists of our time – Iron and Wine, David Gray and Calexico all come to mind. If you’re not convinced somehow in those first four tracks (Impossible) then hold on until track #5 – a song called “For You” and realize the potential and expansive style they can reach from what might be considered a fairly simplistic approach to songwriting. Let it never be said in my presence that an acoustic duo can’t reach that intensity. Seriously – listen to this track – “For You” finds a completely unique gear on the album so far and really shows you a slow burning intensity yet to be displayed on the first four. It pulses along with a slow fire just like “Drive” by R.E.M. did so many years ago now. And moving right into “Another Song” from there – it’s almost completely apparent that R.E.M. had drawn a lot of influence from sounds just like these in We Steal Flyers, kidnapping them and making them “new” for our North American audience. In turn, on tracks like “Another Song” you can almost hear that influence being returned to the UK – now complete with that special pop twist Michael Stipe had crafted so well.

I should probably mention – I know there’s more than a few of you out there reading this that I haven’t met personally out there right now – so let me just say up front – R.E.M. was, is, and most likely will remain my favorite band of all time. Any comparison to that band is hallowed ground to me, not something I’d throw around lightly. So to Derek and to Shaggy of We Steal Flyers, I tip my hat to you gentlemen – this is music I can appreciate in many many ways.

If I had any criticism of this album – it would simply be that to me it really comes alive from “For You” and forward. And to criticize that when the main problem in North America is largely the polar opposite with four great songs front loaded and crapola filling the rest – well, that almost seems irresponsible to me.

While I can certainly appreciate songs like “Down We Go” or “Wake Up” – two of the earlier songs on the album – I can also recognize and acknowledge the stretch they make in songwriting over the course of the album as a whole. I personally think this album improves track upon track from the get go – another reason the song “Sidecar” itself is such a small but brilliant opening. It’s the tiny musical seed of an album about to bloom right in your eardrums.

Listening to a track like “Butterflies” should give you goosebumps. This kind of chord progression, this kind of natural songwriting….there’s nearly nothing else I can say other than “good job” as I sit here listening, somewhere between sadness and appreciating the beauty of it all – words suck in situations like these when the music says it far better than I ever could. Do yourself a favor and pick this album up. And before you get on your soapbox to rant against me “liking everything” all over again – realize again I’ve already drawn comparisons to my favorite band and here’s another one for ya to cement just how much I love this sound: The vocals remind me a lot of Robin Wilson of the Gin Blossoms – one of the sweetest and most emotional set of male vocals to appear on record in the last two decades. While a track like “Something Missing” might actually feel like that to me as a tune I didn’t feel as strongly about – I still completely loved the vocal element of that track and the comparisons it has led me towards.

The ending of this album coming closer with “Can I Be Your Rain” – second to last track, really starts to bring home the entire essence and concepts of the album. Complete with actual rain sounds falling in the background – you can really sense again that atmosphere that simply MUST be present in the room whenever these two songwriters pick up a guitar. Heartfelt and real – this track, along with the final track of the album, “My Show” – really display just how beautiful the songwriting can get and end the album with an instant feeling of coming back to it for a second listen right away.

People often dismiss the folk genre – that’s just a fact – one I know firsthand as years ago when I was just a young lad (ok – a LOT of years ago) I had a tendency to do the same. My years of late and my time at sleepingbagstudios has truly developed a strong bond with this type of music – one that lies in waiting for albums like these among an endless sea of hard-rocking Vancouver tunes.

Ending on the line “You’re all part of my show” was a terrific choice. After listening to the album (now several times) I truly felt like it. Like I said, eyes closed – I wouldn’t have even known that I was on my own continent and wouldn’t have wanted to. This is music that made me stop everything and listen. The careful craft in the writing, the brilliance in the vocals and melody, the beautiful guitar work in the music – these are the things necessary to truly declare yourself in that class of amazing singer/songwriters.

We Steal Flyers have a check mark in every one of those categories as far as I’m concerned. This new album of “Sidecars & Sideshows” is completely worth your time and I’d feel confident recommending this acoustic collective genius to anyone with a set of ears. For fans of the folk genre and lovers of true songwriters – this new album is simply a must have and this mighty band of two amazing voices through Derek and Shaggy will be something to watch out for in their bright future still ahead of them.