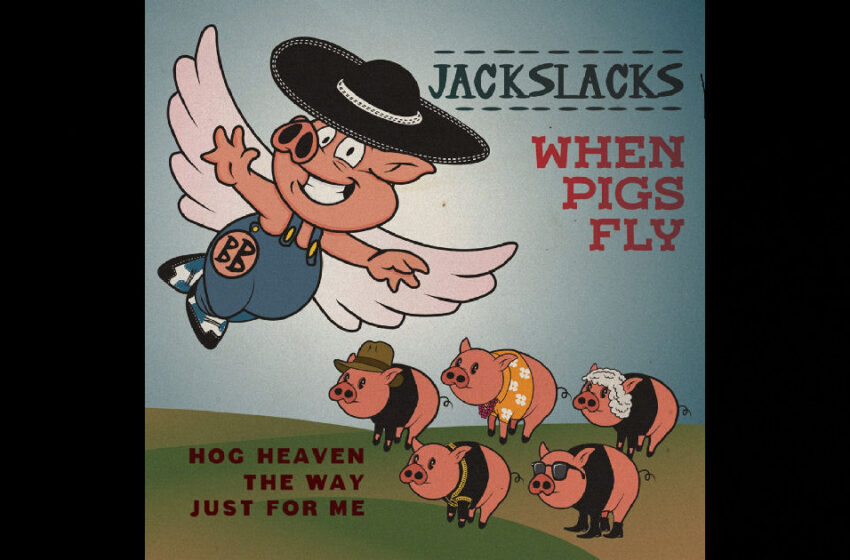 Hey there, ho there, hi there Jackslacks – welcome back to our pages!  Fun fact for our readers & Jackslacks trivia-fans out there, we just recently passed the five-year anniversary of the first time we crossed paths, way back in early October of 2015 in reviewing the Invisible EP with enthusiastic acclaim.  Time flies just about as much as pigs do I reckon.  Of course, a whole lot has changed in the world between now & then, wouldn’t ya say?  You know what I’m talking about…the topsy-turvyness of 2020 where down is now up, fact is now fiction, and political divisions are at an all-time high without question.  Alright, so that last part has been happenin’ for longer than 2020, but you get what I’m saying – I could cite numerous events in between the last time we were rockin’ with Jackslacks and now that would curl your toes like a late-night story told around a slow burning campfire – but I’m sure all of you out there more likely come here to escape the bs & just enjoy some tunes right?

In direct response to the craziness of the Covid-era & everything that’s come along with the insanity of this year, we’ve got Jackslacks here, groovin’ with Rockabilly sound on the When Pigs Fly EP, revealing a set-list of three new songs specifically designed to help ya forget all the crap happenin’ lately for a hot minute or two.  And you know something?  I freakin’ appreciate it brother, so thank-you for doin’ what ya do.  I think light-hearted vibes like this always add something to…jeez…how do I even put this?  It betters me as a reviewer, music-listener, and widens my palette…and I can’t stress it enough, it really is appreciated.  I don’t seek out Rockabilly for the most part…not so much by any opposition to it at all; it’s one of the genres I feel far less versed in than almost all of the others.  In short, I know I tend to always like what comes my way, and I continue to listen to it loud & proud in many cases…but beyond the random submissions we get here at sleepingbagstudios here & there, and a tiny little digging here & there into the genre over the course of my twenty-plus years in this music-journalism thing…I still feel like I know relatively little.  And yes, I’d probably still say that about every genre because I always feel like there’s so much more to learn – and believe there is – but yeah, for the most-part, Rockabilly is a style of music that always ends up impressing me more than I realize it would in between when I heard it last & the next, know what I mean?  Don’t get me wrong, there are many great bands & artists out there proudly rockin’ the billy for all it’s worth to this very day – I’m just saying my own personal knowledge of what’s good & what’s great is massively deficient when it comes to the genre, it’s roots, and its history.  That’s on me though, not on anyone else.  As I’ll tell ya every time & twice on Sundays, I just know what I like when it sounds good…and I like me some Jackslacks, yessiree folks, yes I do.

Because it’s just FUN!  Well…ain’t it?

If objects in the mirror may be closer than they appear, then it’s the contents of a song that might be even closer to the heart & home than you may realize if you’re just listening to the sunny side up sounds on the surface of a song like “Hog Heaven” as When Pigs Fly begins.  Listen closely…because this is where Jackslacks proves it’s not just about celebratory sound & an upbeat disposition – it’s about serious songwriting and the brilliance in contrast every bit as it’s about entertainin’ ya in the process, you feel me?  When you dig deep into “Hog Heaven” and the history behind the song, you learn that it’s actually about former front-man Billy Bacon of the Forbidden Pigs, a San Diego-based band who Jackslacks – aka Chris Giorgio – played with in the mid-80’s.  He unfortunately passed away last year, and Jackslacks pays the man a sweet tribute in song here, alongside the original players from the Forbidden Pigs – even including the original studio engineer of their music in the past was brought back for this cut, all in a collaborative effort to pay their respects, and you gotta love intentions & sentiment as admirable as that folks.  The results should make them all proud…”Hog Heaven” comes out shining with personality in this well-crafted tale/origin story of their fallen friend, and delivers a song that’s genuinely so much more than any set of ears in passing would give it credit for.  When you listen to this song…like, I mean REALLY listen…I think you’ve gotta recognize Jackslacks & his crew of talented Forbidden Pigs have done the man’s memory complete justice in creating a song with a vibe that represents him just as much as the words will.  Or at the very least, that’s how I’m hearing it…I don’t wanna get out of line here & speak on behalf of a situation I don’t know much about – but I’d assume that with all the players getting back together to perform this on a unified front in tribute to Billy, you’d can only imagine Bacon would highly approve.  Love the instrumentation…love the addictive energy and the soul in the sliding guitars roaming through the background…and quite honestly I think the breakdown/final line of this song hits it right outta the park to bring it all home.  “Hog Heaven” is a bold way to start a record, presented in one of the most unsuspecting ways you’d find it…but when you dive deep into this tune, you’ll truly find it’s got a ton to make you think about & keep you entertained as you listen to the life-story of a man that meant so much to so many.  Jackslacks not only sounds tight, passionate, and lively – but you can audibly tell by the way they’ve all played this song with such professionalism, precision, passion, and heart that it authentically meant something to each musician involved with respect to getting it RIGHT, which they certainly did.  “Hog Heaven” is a highlight moment.

“The Way” would be a solid contender to be the anthem for the antithesis of 2020.  Crusin’ & groovin’ & “just moving along, with an open heart-and mind” – Jackslacks embodies the spirit of how sound & music take hold of ya, told through a tale that provides ya with insight into his religious upbringing.  Being brought-up Grunge, there’s undoubtedly about 1000% more joy in this one track than I usually tend to consume in an entire year…but much like Jackslacks has predicted in the write-up that accompanies this record online…it’d be pretty tough to not get right into the catchiness & celebratory sound of a song like this when it’s essentially demanding you take part in the fun at every turn.  So there’s that.  What can I say?  My Grunge roots only go so deep these days…as I mentioned at the start of this review, one of the things I’ve sincerely appreciated about the music of Jackslacks over the years is how it’s helped broaden my own horizons, and songs with the strengths like you’ll hear in “The Way” would be full confirmation of why I’m so willing to listen & have this dude come crashing through with something far removed from the world of sound I tend to find myself in typically – and I dig that.  There’s no doubt that Jackslacks achieves the objective here, and that’s always important to consider.  He wanted to stuff this song with love and joy and happiness and all-things-beautiful and I ain’t gonna be the one to rain on his parade for doing so, especially not when it sounds as solid as this does!  Bonus points for Billy Raven on the “thumping, doghouse bass” – I don’t know if that’s an industry-standard technical term we’re all familiar with, but it sure as heck sounds awesome to me, and Raven supplies this song with an impeccably reliable & groovin’ rhythm that never wavers in its excellence.  Rad guitars from guest-stars Hot Rod DeMink who hung around for another round after appearing on “Hog Heaven,” and Gig Fortier along with him – “The Way” also features a full-on horn section to bring out the spirited sound you’ll hear loud’n’proud beaming throughout the soul of this tune.  It’s way, way, way, sunny-side up without question, but also without apologies either – this is guided by convictions.

Hauling out a legendary heavy-hitter to finish this EP with a solid flash of Rockabilly at its finest – Jackslacks enlists the A-list talents of Tommy Byrnes on guitar for the final cut “Just For Me.”  If you’re not familiar with the man’s body of work, his credits include working with giants of the industry like Billy Joel, Taylor Dane, and Joan Jett…and in particular, when it came to supplying the electrified awesomeness you’ll hear him riff on throughout “Just For Me,” well…that came directly from the same inspired sound that landed him a gig touring with The Stray Cats back in their prime.  I might not know much about the Rockabilly genre at-large as I’ve told ya, but anyone who’s anyone knows who the freakin’ Stray Cats are, and anyone that’s heard them knows you’d have to be one monster of a musician to hang with a crew as talented as that.  Suffice it to say, you can hear the personality & style radiate from the way Tommy plays his way through this song, bringing an expert hand to the axe that’s long proven itself over time to deliver the goods, and certainly is now once again on “Just For Me.”  As for the main star of the show here, Mr. Jackslacks…well…let’s just say you can hear the man in action rising up to the task of playing with such a talent like Byrnes…it undeniably brings out his liveliest, most vibrant, and energetic performance that you’ll hear on the EP, in my humble opinion.  Jackslacks more than holds his own, both on the vocals and of course in his ever-energetic drummin’ – word on the street is that he and Tommy have been friends for quite some time already, and it feels like you can hear that bond of trust between them as they play together, and they create nothing but non-stop fun between them for us all to enjoy on “Just For Me.”   Lightin’ up the mic with catchy vocal hooks & rhythm, and shinin’em up bright for ya with wild personality, loose vibes, and tight execution – you can help but dig on how the music & vocals sparkle with soul & spirit throughout the final song, puttin’ that Rockabilly sound right into the spotlight and finishing When Pigs Fly on bulletproof songwriting with an inspired performance to match.  Wall-to-wall tightness on this new Jackslacks EP…you’re not gonna find any cracks in the armor here…When Pigs Fly charms, entertains, and flashes celebratory sound & style atcha every chance it gets – it’s got depth in its lyricism in tandem with the themes of each tune, and musicianship that’s as engaging to us as listeners as it is recognizably skillful; three tunes yes, but a whole lot to offer ya here.

Listen to more music by Jackslacks at Spotify here:  https://open.spotify.com/artist/6M6F7tl9SohNlJXDlVIZUO