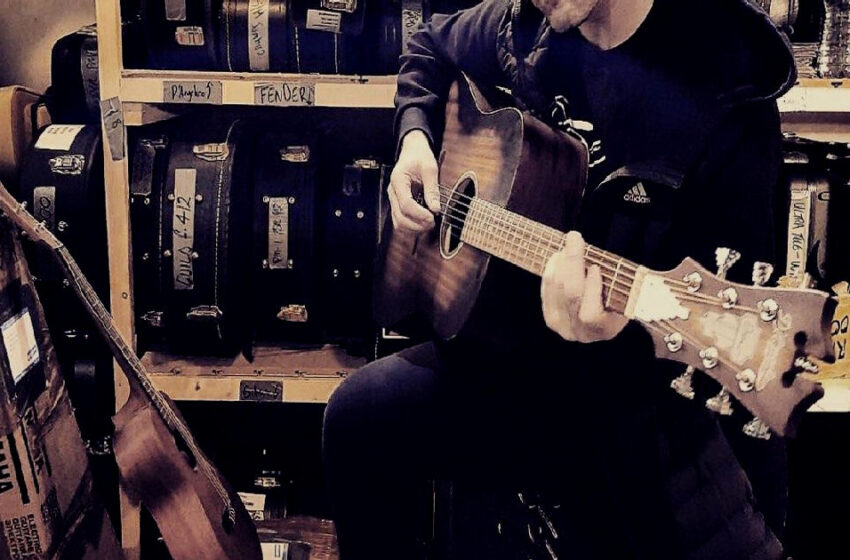 I tell ya folks…we’ve certainly come a long way as artists.  I’m sittin’ here, listening to a single called “Lullaby” by Jacapello, based out of the UK…and not only am I doing that from way over here on the other side of the globe in Canada, but I gotta say…for a demo tune, the sound quality really ain’t too rough!  You don’t have to be a music-reviewer to know what a demo sounds like…chances are, you’ve heard a few yourself…and you’re familiar with the fact that, well…let’s just say, results may vary, am I right?  All I’m sayin’ is that back in the day, they were practically unlistenable, or at best, comparable to some kind of bootleg live performance that your weird uncle recorded by hiding a cassette-player in his boot – but now…now we’re livin’ in the day & age of technology serving the independent music scene for the better…things sound pretty good now, even if there’s still room to improve’em on the final studio versions later on down the road.  Such is the case with Jacapello…I can hear that there’s space for the recording/production to be better than it is now, but it’s not like the dude is trying to hide that fact – “Lullaby” is one track from a whole list of songs on his official website that are stamped with the word ‘demo’ right over top.  So we’re not goin’ into all that stuff today…we know that’ll eventually get better.

Almost everything I’m always interested in at the start of a career revolves around the ideas themselves, and it’s clear that Jacapello has got plenty of those already.  There are about eight demo tunes getting ready to roll into the studio on his site so far & “Lullaby” is a great example of the heart he brings to his style of songwriting.  I might argue that he’s got a bit more of a relevant vibe to work with on a track like “Already Left Me” when it comes to how things sound & what’s out there in the world right now…but you never really know where a demo tune can end up from where it starts.  If he makes the right moves, there’s a chance that Jacapello can draw out the full sweetness of “Lullaby” and can get it all closer to what’s out there on your radio-waves…if that’s what he wants to do, of course.  What I’m really digging right now is the vivid lyrical imagery in his words…that’s what hits home the quickest on a cut like “Lullaby.”  Like he’s dreaming out loud while providing the comfort, wisdom, and guidance that comes from experience, Jacapello’s “Lullaby” is really all about looking forward to the good things in life overall – it’s about what’s worth waking up for, each & every day…and I love the positive spirit within this song.

What’s also working well already is the vocal melody – it’s clear that Jacapello can not only hold a tune competently, but also that he understands how to infuse emotion into his words in a way that we’ll feel them as we listen.  Ultimately, “Lullaby” is about as inoffensive of a song as you’re ever bound to hear – it draws completely on sweetened sentiment & sound combined, but that seems to work really well for Jacapello all-around.  It may be worth noting that while less-edgy material seems like it can be a great thing, it can actually make the pathway forward in music a bit harder to navigate in some ways…my advice to Jacapello would be to simply explore each and every place that his songs can fit from standard audio recordings, to placements on soundtracks in television & film.  Because to me, that’s where a song like “Lullaby” probably belongs, and has the most chance to be heard & be commercially viable too…in the right scene paired with matching imagery onscreen, a track like this could actually become a viral hit.  Mind you, I don’t think that’s the intention here…I think Jacapello’s a much more humble artist than to be seeking out chart-topping fame & fortune right off the bat…I’m just saying, a track like “Lullaby” would probably have a harder time finding its way to the radio than it actually would to a TV screen – make sense?  He’s got a sincerity that resonates beautifully…and that’s what I’d be leaning on if I were him…it’s the heart in a song like “Lullaby” that has the power to charm & captivate us, even as delicate as it is.  I’ve peeked into the rest of his demo list however…and a quick listen through the songs there prove he’s a versatile artist with a whole bunch of talent, capable of doing many things with his music, in a wide variety of styles.  “Lullaby” is a good snapshot of what he can do, but just a fraction of this man’s story as an artist to come – it’ll be completely interesting to hear where he ends up with his music and what he goes on to do from here…all-in-all, the potential & possibilities for Jacapello are truly limitless.

Find out more about Jacapello from the official website at:  https://www.jacapello.com