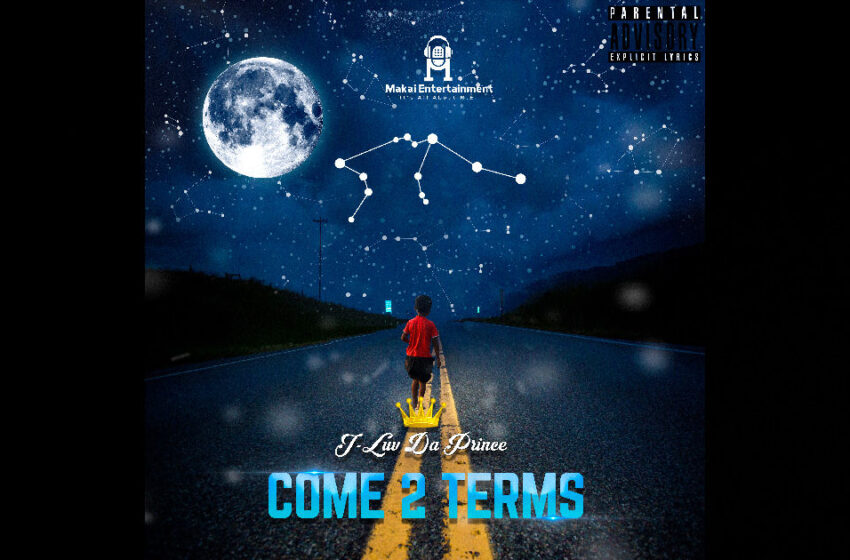 Fun fact…the last time I reviewed J-Luv Da Prince’s music here on our pages was way back in 2015 – for an EP that doesn’t even appear on the dude’s page at Spotify.  It’s not at Apple Music either…but if you do a little digging online like I tend to, you can still find the In The Moment EP posted up at Soundcloud.

Anyhow.  That’s the past – and we’re here livin’ in the present, and I’m always stoked to have an artist return to our pages no matter how long it’s been.  J-Luv Da Prince has released several singles & records in between the last time we connected online, so it should be interesting to see what’s up when we push play and have a listen to his latest EP that was released this year in 2022, called Come 2 Terms.

I’ll fully admit that, after seven years away these pages of ours, I was probably expecting things to roll a bit more in J-Luv’s favor than I felt like they did in this lineup of three tracks.  It’s a bit of a mixed result on Come 2 Terms if I’m being real with ya…and as you regular readers know, that’s all I’ve ever been.  “Right Here” ain’t a bad track…ultimately, I think J-Luv’s got hooks that are memorable threaded into this opening cut – I’m probably looking for a bit more confidence in his voice to match the power of his words and the explicit nature of everything he’s saying, but it’s still a pretty good listen overall.  I like the use of melody in his vocals to a degree…but when you’re listening to his words, you’ll get what I mean…it feels like it should come with a bit more attitude, grit, and raw sound as opposed to the more slick vibes he goes for.  The background layers compensate for that a little bit…but I’m not 100% sure it’s enough or that the theme & sound are as much of a match as perhaps they should be.  The more I spun this song however, the more I became convinced that the hooks were effective and would hold up over time – and don’t get it twisted…I like the lyrics he’s got written into this, I’m just advocating for a bit more force and power when it comes to the personality & edge we’d wanna hear coming with such explicitness.  I mean, he’s got “suckers trying to play me like a motherfuckin’ snare” – and you don’t want them to just think that’s OK by singing to them, you feel me?  You want those “suckers” to motherfuckin’ KNOW they CAN’T play you like a snare, or any other kind of instrument for that matter…so they gots to be TOLD, straight-up.  Where my biggest concern actually resides, is when J-Luv says “never been a bitch, we can leave it right here” – don’t get me wrong, I believe him…but that’s just about the last place you want to have that slight tremor in the vocals…you want that moment to come out crystal-fucking-clear so that they KNOW what you’re saying is saying is the uncompromised truth…like how he spits the verse around the 1:30 mark; you want to find the same fluidity, confidence, swagger & clarity – that’s where J-Luv’s at his best.  And to be fair to the man, he’ll give you more of that side of his sound as the EP carries on from here…I’d put “Right Here” in the middle of the set – it’s still a quality cut…I think that J-Luv could bring a bit more to it, but by comparison, it’s still a pretty solid track.

Like I said though…all-in-all, “Right Here” works well enough – it’s the second track of the three that has issues that need to be fixed up without a doubt.  What’s perplexing to me is that J-Luv Da Prince knows it…he’d have to…he’s got a set of functional ears that know when he’s right on-point, and knows when he’s coloring outside of the lines like he is in the hooks of “Ahead.”  What makes it super tough to have to lay that out there, is the fact that the bars & the verses of this cut are probably my favorite moments on this whole record…J-Luv gives you a dose of what makes him the superstar he IS, but paired with a hook that compromises that whole next-level performance with something that doesn’t quite meet the standards he knows it should.  I’ll give him this much…it’s a completely salvageable idea – I DO think that the hooks are the right ones…it’s just way outside of the range of tone he’d be looking for.  There’s a possibility that it’s the result of the layers clashing and colliding together that “Ahead” crashes as hard as it does in the hooks…it’s definitely possible that a single layer of vocals there might achieve what he’s looking for…but I suspect it’s just a moment that really needs another go-around in the booth, and perhaps a different approach to the tone he’s using there to get the maximum out of what that moment can be.  Think of it this way…you always want to find that balance if you can…or if anything, you want the hooks to take a song to the next-level as most do.  Right now, J-Luv’s got the verses firing at an all-star level, and the hooks are nowhere close to that…so at the very least, there’s got to be a method or some kind of adjustment that can be made to lessen the gap between these two parts of the song.  It’s risky right now…the hooks start up “Ahead” after a brief intro…and it’s about a minute in before we get to the rap from J-Luv and find ourselves on solid ground – that’s a hard sell to the masses out there yo.  Lyrically, he’s on-point…inside and outside of the hooks, the writing all works well – it’s just a matter of trying a couple different things to see what’s effective, and being extremely objective when it comes to the final product.  No lie, the rap is SO STRONG that I’m like, where was that dude when I was looking for him to show up in “Right Here” earlier on…and the hooks need so much of an adjustment that I’m kind of shocked that he’s gone with’em.  I’m a firm believer that J-Luv knows what I’m talking about, and that this isn’t even surprising to him in terms of my feedback – so when that’s the case, you gotta go with your gut and make the changes needed, lest you find yourself at the mercy of the court of public opinion.  I think J-Luv’s got a lot more in him than he reveals here in “Ahead” – I think the man really just needs to go back into the booth, summon the confidence you find in his verses, and handle his business like we know he can in every aspect of the material he’s creating.

On the bright side of things, he ends the record on his strongest cut of the set overall – “Come 2 Terms” is essentially flawless…I don’t feel like J-Luv needs to make any changes to this final track.  He’s done his title-track the justice it deserves, and attacks this track syllable for syllable, pound for pound.  You can tell from the words he’s written into this record that the man’s hit some hard times…and whether or not he wants to admit it, he’s been hurt, and much of what we hear is responding to that.  “Come 2 Terms” smartly harnesses the pain and uses it for motivation and fuel for the soul…J-Luv Da Prince finds a way to make his struggles fire him up on this cut, and it seems to make all the difference when it comes to the final product.  The man pivots, shifts, and flows with supreme confidence on “Come 2 Terms” – and all I’ve been advocating on behalf of in writing this entire review is for THIS guy to take control of his music like he does on this last cut.  Again…I’m not the only person out there that can hear the difference – J-Luv Da Prince knows exactly what I’m talking about, I guarantee it.  There’s never any shame in trying out new things to stretch our potential on a creative level…but when it comes to what we choose to put out there in the world, it’s crucial to be as objective as we can be.  There’s a huge difference to the quality of the performance on “Come 2 Terms” or the verses of “Ahead” than the rest of what we hear – and that’s the level J-Luv wants to dial in on to make sure he’s bringing that to every cut he ever creates.  Doesn’t mean he can’t try other new things, doesn’t mean he can’t experiment with other ideas outside of Rap either – it’s just a matter of focusing, and really unleashing the full power of his potential.  A track like “Come 2 Terms” completely proves he’s more than capable, just as I’ve been tellin’ ya he is – now it’s all about putting that theory into practice consistently, being brutal in his objectivity, and settling for nothing less than his very best, like his music genuinely deserves.  He puts a lot of thought into his writing – it’s only fair that he gives every cut a solid chance to make the impression and impact that they should have by holding nothing back when the red light in the studio comes on to record, and that he gives his material that next-level personality & vibe he’s known for, like we hear in this last track, 100%.

Find out more about J-Luv Da Prince at this magical multi-link:  https://linktr.ee/jluvdaprince