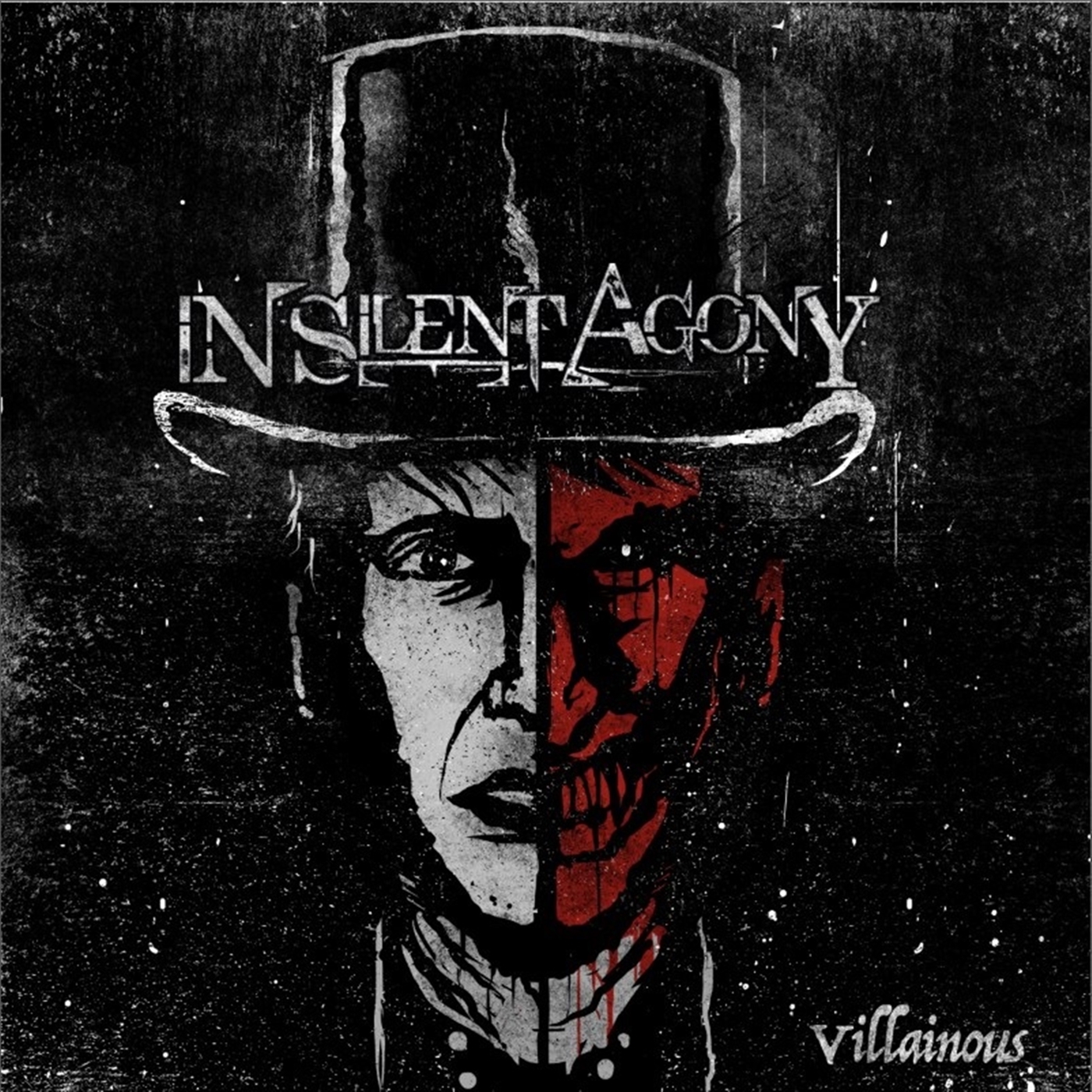 Ohhh I can never quite remember…is this Black Metal…Dark Industrial…Goth…where does the music of In Silent Agony fall into genre-wise?  To go further with that thought…what point would there be to putting a beast in any kind of box?  However you want to categorize the music of In Silent Agony isn’t likely going to help you contain the untamed, wild & straight-up demonic sound of the songs you’ll hear on the new Villainous EP…it’s just another label…and it’s the music that speaks for itself.

Sometimes instead of speaking, it screams at you…like In Silent Agony is doing over the five raging cuts on the brand new record.  As far as I can tell…it all traces back to the mind, creativity and talent of one man…a dude named Eski.  Making music this enormous is a challenge for most BANDS out there, nevermind a solo-artist!  In that sense…you’ll find the Villainous EP to be seriously impressive from the sheer scale, size & scope of the tunes…and if you like the hard-stuff, you’ll definitely dig the dangerous, menacing and throat-ripping sounds spread-out all over these new cuts.

For an opening tune on a record, you pretty much can’t ask for a more immediate impact than you get in the beginning of “Villainous,” the EP’s title-tune.  This track instantly becomes enormous through the intensity of the riffs and pounding kick-drum combination…and shortly after that, becomes all-out monstrous.  Slithering his way through a whispered verse before hurling out the chorus of “Villainous” from the very bottom of the pit of his stomach, the words are brought-up like a Technicolor yawn early on a Saturday morning after a wicked Friday night.  The vocals are well-executed and certainly something you’ll notice in the song…as to whether or not it’ll resonate and connect with you, that’s another story entirely.  It’s a sound that appeals to a niche section of the planet…Eski knows this I’m sure; I don’t think you end up creating this kind of music without at least knowing it represents a minority of the mainstream.  And oddly enough…it’s because of knowing that…that you also have to assume that truly dark, gritty & gripping sounds like this are also actually created out of a true love for the sound, style and art of it all.  The music of In Silent Agony might sound evil…but at the root of it all, you’ll actually find an unbreakable bond and genuine love of the craft.

If you’re a fan of the real heavy…like…Meshuggah kind of heavy…you’ll dig the bone-crunching guitar chops of “Sightless” and the hard-edge to the vocal growls and rasp.  I dig the pacing…dig the guitars and the strength of the transitions from part to part; in a way, I suppose it’s a bit more straight-ahead or accessible than the opening tune was…or it could be that this one just started to make more sense to my brain as I got right into the sound of In Silent Agony.  I’m slightly removed from this sound in whatever genre you’d consider it to be a part of, but not that far off really…I’ve spent my life listening to intensity found in extremes like Meshuggah and Jesus Lizard…so I do appreciate the brutalizing & punishing approach you hear in the sound of “Sightless” and can still audibly relate with enthusiasm.  Like for me…the money moment in “Sightless” is close to the end…the final minute or so you could argue heads almost into noise-rock/thrash territory which is a hangout I like to haunt frequently.  It’s all well-executed and certainly well-played though…everything you’ll hear from In Silent Agony merely comes down to a matter of personal taste on whether or not you can handle its raw-power and untamed aggression.  Some people dig that extremely, others not so much…like all music, not much we can do about that…but skill-wise & writing-wise, all the ingredients are here and Eski delivers large-scale…like seriously large-scale, gigantic, enormous, behemoth-size entertainment undoubtedly.

I enjoy the extremes though…and as an audiophile, I appreciate the effort that’s been put into the placement of sounds and the mix on this EP – it wouldn’t have been an easy task to harness the power in these tunes but Eski has pulled it off impressively.  The songs have intensity and knockout-punch in the mix and have really come out sounding no-holds barred & full-force.  I’ll play you an example of this later on the SBS Podcast being released tonight…I’m gonna spin a tune called “A Dark Embrace” to give you a taste of the bold meatiness of these guitar riffs and the versatile range of dynamics on display in the vocals.  From the whispering and low-down sounds of his tone to the throat-ripping violent & tortured screams – Eski has clearly committed to his performances and delivers with a seriously threatening confidence; each of these songs are out to kill you…you’ve been warned.  “A Dark Embrace” is a solid cut though…a great representation of what this artist is all about from beginning to end with solid hooks you can grasp onto and a completely deadly performance.

If you were somehow managing to sleep through the first three tunes, I’m positive that the rumble and extreme approach to “Plaguerism” will manage to wake you up.  Believe me…I’m wide-awake by now and I’ve already shit my shorts three times just from listening to this record and having these massive sounds thrown at me.  In Silent Agony is relentless…”Plaguerism” pounds even more aggressively than the rest and it seems like Eski is never going to run out of steam…this guy is a serious beast.  I’m honestly not quite sure what’s causing the mix on this one to come out a little bit strangely…if it’s the switches between the lefts & rights of what we’re hearing in sound…but after several repeat listens I’ve come to the conclusion that there’s something about “Plaguerism” that didn’t quite measure up to the rest in this department.  Good tune…but there’s like…compression issues or something that’s preventing this track from becoming the true behemoth it could become…something holding it back a bit.  Writing & performance-wise, still as solid as the rest of what we’ve heard but a tricky mix trips this one up a bit.

Wouldn’t you know it…In Silent Agony has saved a slickly cut radio-ready completely accessible top-40 hit at the end of the EP!  Okay…that’s like…at least 75% untrue…I’m just yanking your chain about the radio-friendly factor here…but I might be completely on-point with the larger degree of accessibility in this tune.  Eski’s written some extraordinarily flavorful guitar parts to this one, especially the accented melody that crawls into the chorus of this tune.  Flexing a nuclear level of power throughout the verse, “Diminishing Returns” ends up finding itself rooted in a much more widespread, accessible sound when it comes to the chorus of this tune…and quite honestly, it works really well.  There’s a good chance that this final cut ended up being my favorite on the entire EP personally…but no matter where it places on the podium, there’s no doubt in my mind that this made for a wickedly strong ending.  Back to maximum power in performance and production – In Silent Agony rages to victory at full-volume on the Villainous EP and establishes an enormous impact on the ears you certainly won’t forget anytime soon.