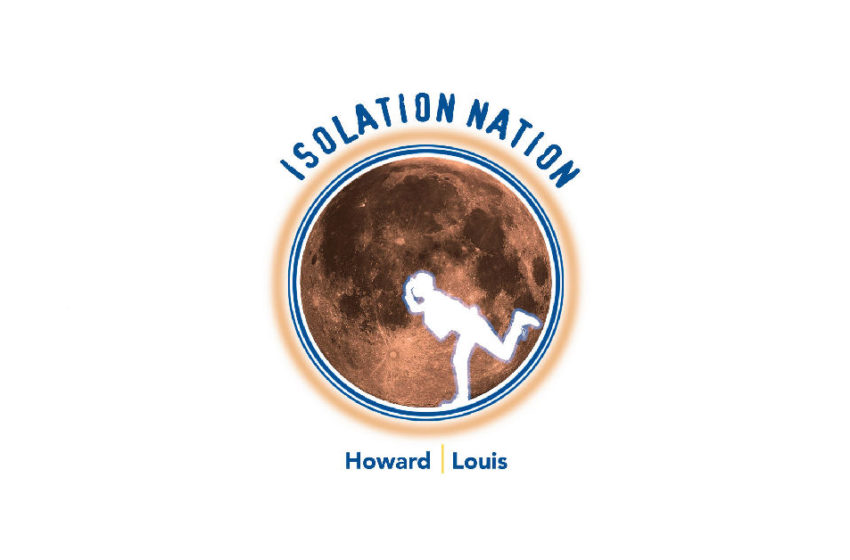 Believe it or not, it was actually right around this time of year in 2019 that we last reviewed the music of Howard Louis, when he released his record of cover songs – specifically Tom Waits cover songs – on the Waits. EP.  And I’d recommend ya believe it…there’s really no justifiable reason not to.  I’ve always been truthful with you all to begin with, but beyond that, the review is still right there on our pages immortalized for all-time for you to verify if ya like…it’d be straight-up silly of me to lie about the dates.

Obviously a LOT has changed in between the last time & now though…that much is clear to everyone out there.  While there’s usually a bit of distance in between releases for any artist/band…well…I’m sure I speak for everybody in saying this is the first time a global pandemic was jammed into the middle of that process.  So no, it’s not the ‘normal’ course or cycle of music-making for anyone out there right now, even if you’re like Howard Louis and you manage to end up on our pages like clockwork in what appears to be a ‘normal’ routine.  This time is different – and you can see it right there in the title itself.

As we all know, art imitates life…at the very least.  At times like this, art & music become true reflections of the reality we’re living in…far much more than any kind of imitation and much closer to what a daily journal might look like if it was collectively written by the creative community around the globe.  There is next to no doubt that a large portion of the music we’re about to experience over these next years to follow are going to be largely political or Covid-influenced…and that’s natural…music was meant for catharsis, healing, and sharing an experience that others can somehow relate to.  Just so happens, in this case, all of us can.

Some artists out there, much like Howard, are slightly ahead of that impending curve, and already releasing music that examines the current state of the world & how we’re all feeling.  It’s not born out of some clever decision to capitalize on topics that everyone’s tuned into right now – no; it’s actually nothing close to that from what I can tell…artists/bands make songs like “Isolation Nation” in a sincere effort to help keep themselves sane, while in the process also providing a tune that’ll likely do the same for someone else out there listening as well.  You write songs like this to ‘get it out’ of your system as best you can, much like you might with any breakup or tough situation you’re struggling with in life; only this time around, as I’ve mentioned already…things are different.  We don’t know where this all ends.  There are unanswered questions, there is endless restlessness, there is a magnificent country full of people down south of the border where I live that are right now every bit as divided as they are isolated.

And there are artists with the courage to speak up and tell you how things really are, unfiltered.  That’s where Howard Louis comes in.  I read the line “We need this enema, then peace” before I’d actually even heard him sing it, and had already formed a massive connection to “Isolation Nation” as a result, because ultimately, I couldn’t agree more.  While it might be a tiny fragment of the song overall, I think you get a really good snapshot of what “Isolation Nation” is like to experience by examining it up close; you can infer from that one line alone that Howard isn’t afraid to address the ugly parts of this whole theme & subject he’s taken on…but he’s still maintained that thread of hopefulness as well.  I mean…look…”Isolation Nation” is not going to be the happiest song you’re gonna hear this year – nor should it be, nor should that be the requirement for finding its way onto your playlists.  In my opinion, artists have but one major responsibility…and that’s to be the truth.  Whether that’s their own personal truth, or a truth we all share, or taking a magnifying glass to the world and telling us what they honestly see through their perspective – an artist staying true to themselves will always yield the most sincere results that connect to us as listeners.  In the case of “Isolation Nation” – you could argue that it’s not actually happy OR sad in its demeanor…it’s factual as far as I can tell…relevant…accurate…and real.  And as much as I’d love to tell ya that facts equate to sunshine & rainbows right now all over the world, take a look out the window for yourself and you’ll see that’s not the case.  You’ll see, because you’re inside, part of the “Isolation Nation,” not outside living the same carefree life we all knew only a short time ago.  Louis will go on to make a whole bunch of relevant, relatable, insightful, and powerful political commentary throughout the lyricism of his latest single, proving the main points of what he’s singing about and how the nation he’s called home for so many years has now become the “Isolation Nation” for so many more reasons than a mere worldwide pandemic could provide…I can’t imagine anyone out there not finding a way to, at the very least, understand where Howard’s coming from, if not fully relating to his each and every word.  There are problems brewing in the USA and he’s not shying away from reminding us we’re in the eye of the storm.

What I personally love about the SOUND of this track, is that it’s immediately engaging and drops a whole ton of single-worthy, stylistic, and slick sound right up on ya, instantly as “Isolation Nation” begins.  To the point where, if anything, Howard’s out-written himself from verse to chorus…I wasn’t opposed to anything I heard here, but I’d be lyin’ to ya by omission if I didn’t say the verses are this song’s main strengths.  The pace of that rhythm & groove is freakin’ immaculate…the BOLDNESS and passion in the playing is right on the money…the vocals…are some of Howard’s best for sure.  Bottom line is that if the biggest problem you’re facing as an artist is someone digging on the verses you wrote more than the chorus, you’re in pretty damn good shape overall.  I have no doubt whatsoever that the hooks of this cut are going to be a lot of people’s favorite parts…it IS our differences that make this world go round, ain’t it?  What I can tell ya is this…regardless of whether or not the chorus melody & hooks are your favorite part of the song – they are extremely effective; you’ll be singing this cut around the house for the next week, guaranteed, and chances are it’ll all stick within a single solitary listen.  Of course, I’d never recommend just listening to a song once and I’m not about to start now with the likes of Howard Louis!  It’s an undeniably catchy cut with a lot of meaning underneath its shiny surface.  Dude’s always been a fantastic part of the music-scene out there and puts a ton of passion & heart into the music he makes…”Isolation Nation” is no exception to that high-bar & standard set in the past.  Bonus points to Matthew White on the guitar/bass for ya…and Chris Stever handling everything else outside of Howard’s piano/vocals…this single came out tight all-around, and at a time we all could use it.  I think a lot of folks will truly appreciate having a song out there that sums up what so many of us are feeling right now…it’s tracks like “Isolation Nation” that actually make us realize we’re not alone.  How’s that for a twist?

Find out more about Howard Louis at his official page at Instagram here:  https://www.instagram.com/howardlouis