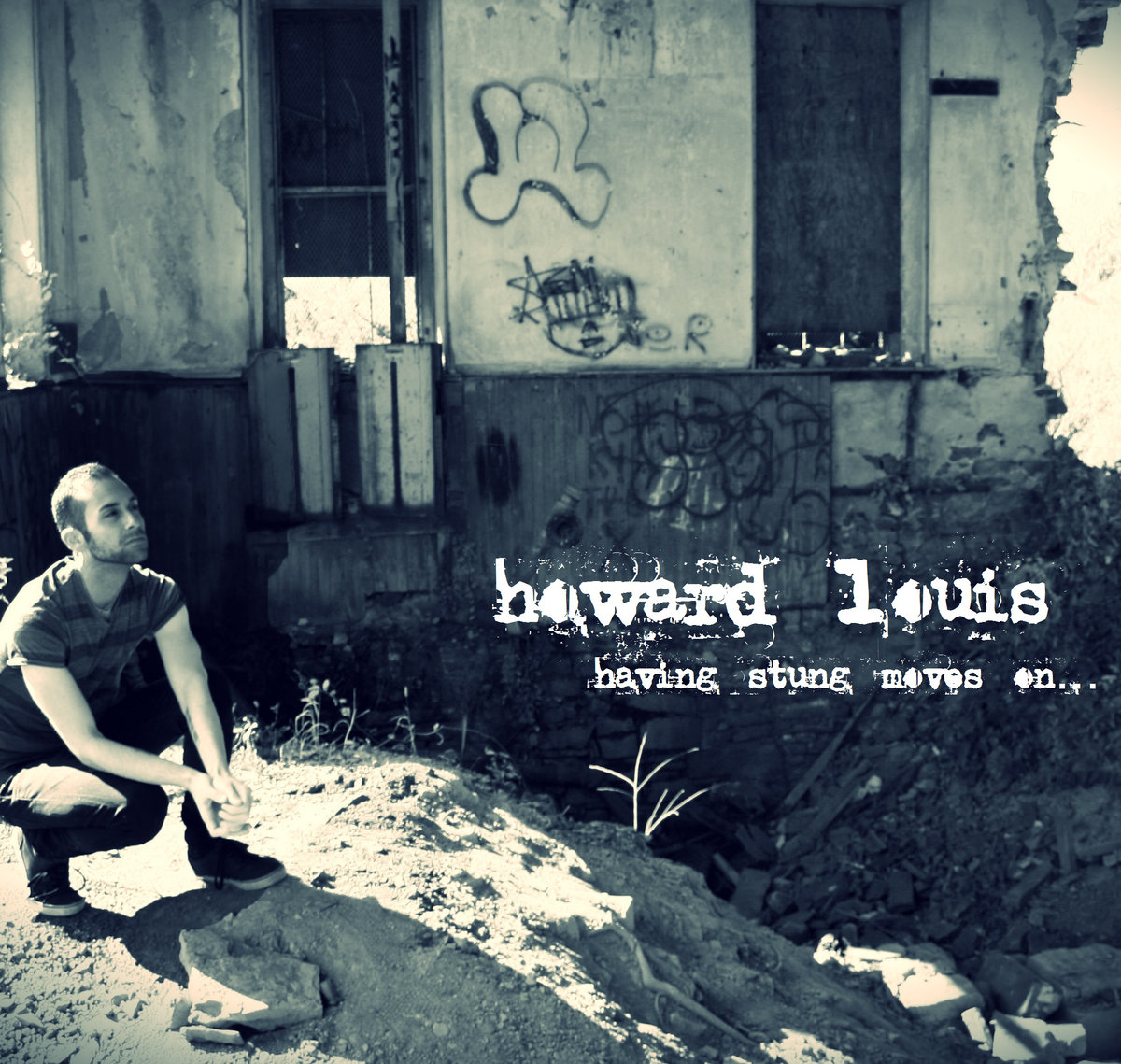 For grooves so subtly-woven…you’ll be impressed at the amount of hooks Howard Louis has found here on his new album Having Stung Moves On… Smart writing and clever melodies make themselves known on this acoustically-driven, folk-laden, storytelling set of songs; Howard is clearly a writer at heart…the kind of guy you know had been writing closet-poetry until the time had come to pick up a guitar and turn those poems into songs. There are plenty of emotions on display…theatrical & dramatic moments and plenty of dynamics within melodies that remain uncomplicated; he’s written these songs on Having Stung Moves On… to his strengths completely.

The album lyrically…is written in such a way that it’s got me watching my own grammar and sentence structure more than normal today. Like I had mentioned…Howard is a writer…but like…a writer’s-writer – know what I mean? Many of these songs appeal to me for their poetic nature and wordy lyrical ideas – but this could certainly be because writing is what I spend my time doing. For others…Howard has run a slight risk of losing them in the context of the lyrics and sounding slightly pretentious in pursuit of his ambitions…I can hear that would be the impression some might have. It’d be the same people that generally struggle with poetry or other things of artistic-natures unknown to them and their comfort-zones. On the flip-side of that coin is the fact that he’s written about several subjects from different perspectives and brought something new to these songs of his…it’s not typical…and it’s important to remember just how okay that really is to be. But make no mistake – the words are clearly every bit as important to Howard as the music is; you’ll notice that instantly as the album begins with “Record.”

Tone-wise and somewhat through the music and approach as well, Howard reminds me quite a bit of Better Than Ezra’s Kevin Griffin with the rhythmic/melodic way he approaches the vocals on “Record.” As an opener…I think Howard’s played this one right after thoroughly examining this tune. To be truthful…at first I wasn’t 100% sure…I wasn’t sure there was quite enough through the music and some of the words felt either stretched to fit the meter or that a sentence would need another word to make it really work in a few spots. “Record” is much more clever than it first appears…as it continues to build, the issues with the words sort out quickly and the music fills-in more & more as the song continues; and like the movie that you discover the ending at the same time as the character you’re watching does…you realize that perhaps the most brilliant idea to end this song is right around the corner. A complete confirmation that Howard is already thinking on a different level – the ending of “Record” is everything you hope it would be; and by the end it’s a perfect example of bringing a full-vision to fruition on a recording.

Impressive beginnings continue on into one of my early favourites from the record – “Realm.” The verse works a haunting mystique, brightening briefly for a moment with a short bridge before finding its way into an incredible chorus. That’s a hook that makes an instant connection and pulls you right in…and though perhaps still a little wordy in a sense, the rhythmic-pull of the melody-line in the vocals and the winding-way that Howard sings it makes it all work fantastically. The way the music fills in with drums surrounding him in the chorus is masterful…it’s an epic track when it hits its full-stride – still subtly-delivered in his signature-style, but “Realm” is BIG, no question.

Singing it out for real on “Underground Press,” Howard will impress you once again with his ability to really take the natural rhythm of the music and find a sweet-pairing through his vocals. “Underground Press” keeps it simple with a bright acoustic-guitar shining away while Howard takes this song on his shoulders; he sounds great in his switch between his natural and falsetto tones as he transitions through them in the lines & lyrics. “We’ll See” is a great example of the dramatic-side of Howard, but also a song that really shows the strength in his tone. Over what is certainly an artistically-natured track, piano and guitars combine for a beautiful backdrop as Howard takes the lead melody-line once again with much of these songs depending on his performance on the microphone every bit as much, if not more-so than the music. If you’re with him this far into Having Stung Moves On… then you’ll be with him on “We’ll See” – if you’ve been on the fence, you might fall off here…but I encourage you to get back on that fence and ride it like a horse until the end of this album – how’s that for mixing metaphors? But seriously…while the album takes a slight dip in energy through “We’ll See” and the following “Voice” – there’s also an intense increase on the focus in the atmosphere and delivering a unique experience to the album at these points. “Voice” makes an incredible use of soul/gospel/blues singing from both the lead in Howard and the fantastic backup vocals of Tracy Bonham. Once the piano-line of “Voice” came into play, I was absolutely hooked on this one; the atmosphere is impressive…cohesive to Howard’s style & sound yet very unique from the rest on the album.

Letting the rhythm and lyrics take the spotlight on “Sailed Away,” Howard lets his ability with words create solid imagery on this middle tune in the album. Short, sweet and groovin’ throughout…”Sailed Away” is like the meal that fills you up after you misjudged its appearance; don’t let the short-length fool you…he’s packed a lot into this tiny-track! In immediate contrast and pursuing further-depths of the emotional-layers on this record, “Solution” comes out defining itself quickly apart from the rest. Mystical and nearly classical-sounding in its composition…”Solution” nearly sounds like an adapted hymn of some sort. The haunting, isolated feel of the misty guitar-notes floats through the air with a thick & heavy atmosphere you can audibly feel creep upon you…Howard’s done an insightful job here on matching the energy to the emotion in the music.

“R.F.T.” certainly deserves a mention or two. An impressively sweetened melody…Howard sings at his best and fully embraces the melody and tone of his lyrics on “R.F.T.” I looked up what an “R.F.T.” tattoo might be, which he references in the words of the chorus…it’s hard to say…the results really only reference a million tattoo parlours…not really so sure that helped me out! At the end of it all, my search concluded that I should simply head back to the ultimate resource…the lyrics themselves. While I might not know what an “R.F.T.” tattoo specifically might be…I certainly get the sentiment of what he’s driving at in this song; I only have a couple tattoos myself, but each time I look at them I smile and get the ultimate sense of nostalgia. So believe me…I hear where he’s coming from in this song…just so happens that the rhythm and melody in “R.F.T.” makes it that much easier to hear where he’s coming from than my boring plain-old written-words!

He’s done well to preserve the quality of his ideas through short-to-mid-length songs…but his creativity might have paid off more extraordinarily than he could have assumed once stretching out his music past the five-minute mark on “Soul Shake.” This is an absolute stunner, 100%. It’s dramatic, vibrant…at times almost like an opera in the nature of its dynamics and writing…and once the chorus hits, the ultimate payoff is there. Howard has never sounded as incredible as he does on this tune…it’s still highly-progressive in a sense that there’s a lot of ground covered, still not overcomplicated by too many elements and keeping it simple – but the structure itself is a massive landscape on “Soul Shake.” The shining combination of piano and drums produce sheer-magic on the stunning melody of “Soul Shake” – but as impressive as any one aspect may be or become – it’ll remain Howard’s gripping performance on the chorus of “Soul Shake” – that’s hit material right there. Completely captivating, massively strong and armed with an uplifting & inspiring tone that plays throughout its length – he’s definitely found a winner with “Soul Shake.”

Really recalling that laid-back Kevin Griffin vibe to the final original tune on Having Stung Moves On… the groove and melody of “River” is flawless. Synth and guitar combine to give it a slight classic-rock feel in the background of the rhythmic percussion…sounds are rich, full and produced perfectly. “River” keeps the poetic-nature of Howard Louis’ music consistent right up to the final moments of the record…but between these final three tunes, he’s really taken hold of the melody-lines with a bolder confidence that really helps these performances shine bright. “River” makes for a fantastic ending to Howard’s record…overall, it’s a real sparkler and has a lot to offer through the writing, performance and production…he’s put the work in and you can hear it.

“Record” comes back reborn on the “DJ Carl Michaels Below Ground Mix” as the bonus-track you can get with Having Stung Moves On… – but…as much as I dig it…it’s not exactly a fit with the rest. I’d maybe have kept this as a separate release…its electro-infused remixed-beat is quite different than the rest of the subtle-melodies you’ll hear on the album. It’s a worthy remix…there’s no question about that…just feels a little out of place if you leave it at the ending of this particular record…on its own, I’m loving it. Lots of bizarre but audibly-exciting new arrangements to the vocals and how they both play & sound…there are plenty of well-executed ideas on the “DJ Carl Michaels Below Ground Mix” – but they are separate ideas from what you’ll hear on the rest of the record outside this bonus-cut…just sayin. Hearing the entirely new-life that the remix gives to “Record” though…always makes you wonder a little about how music can sound through another person’s perspective doesn’t it? I always dig the albums that Bloc Party sends out to be remixed after putting out the original versions…and I think that’s always a cool idea to do. Separately…but yeah…do it! After the unique & entertaining mix on “Record” in the remix version…if I was Howard…I’d definitely consider it – might be really cool to hear what the rest might sound like too!

Find out more about Howard Louis through his official page at: http://www.howardlouis.com/