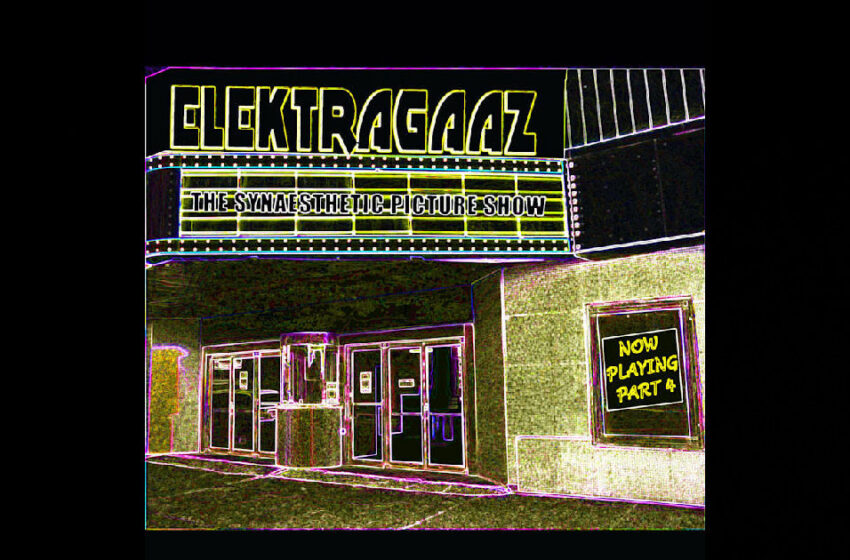 Elektragaaz – “The Defiant Ones” / “Situation On Avenue B” – Singles Review

Holy crow, has this crew been busy or what!?!

It was only less than a year ago that I was introduced to the music of New York’s Elektragaaz through a couple of singles from their EP called The Synaesthetic Picture Show Vol. 1 – and somehow, in between then & now…in what would still technically be their debut year – they’re already heading into Volume 4?  That’s more than commendable…it’s outright inspiring just to see such creativity, nevermind hearing it too!  Elektragaaz is clearly in the zone right now and cruising along at an extremely rapid pace for their new releases.  Strike while the iron is hot I say…good on’em for gettin’ all this music out – and thanks!

In keeping with the previous trends they’ve been rocking with in the past, their new record also contains another original six-song set for you to dig on.  The opening cut, “The Defiant Ones” is very much built on a Kraftwerk-esque energy and charisma…updated with a bit more punch in the production for the right here & now so that you can crank a cut like this up to the rafters and surround yourself in-full with this hybrid fusion of instrumental awesomeness.  Though how exactly the number six plays a role in what they’ve been coming up with, I do not know – but I can tell ya that, aside from each record itself containing six tracks, the entire set of EPs for The Synaesthetic Picture Show is also rumored to total six volumes by the time all is said & done.  Ambitious crew, ambitions tunes…ultimately all this equates to great times for you fans out there from across the world tuning into what Elektragaaz has been cookin’ up.  If you dig what you hear, like I did back in March of last year when I had a listen to their music for the very first time – I’d say it’s safe to say that you’ll have no problem at all keeping your seat on the bandwagon for what they’ve got coming out.  Unpredictable music on a very regular schedule – you gotta love it.  When you listen to the frantic nature of a track like “The Defiant Ones” and how scattered and all over the place it can often feel when you listen, you’d almost be surprised Elektragaaz remains so timely with their output.  Don’t go mistaking a wild & adventurous approach for some kind of indication that they’re not 100% focused – just because they’re willing to color outside of the lines compared to the rest of you doesn’t imply they don’t know what they’re paintin’ – you feel me?  I listen to a track like “The Defiant Ones” and, while I know it can present multiple challenges to the minds of those not quite as dedicated to their speakers as I tend to be…you dedicated fans of Prog, EDM, Instrumental…you’ll all freakin’ love this.  Because don’t get me wrong – when I say ‘scattered’ I’m talkin’ about the damn-near anxiety-inducing feeling that comes along with the rapid pace of the song and the multi-directional sound it’s coming along with – when we’re talkin’ about the tightness of a track like “The Defiant Ones,” let’s be crystal clear – they’re focused AF.  From wildly addictive vibes & bendable synth tones, to the epic structure & radiant melodic ferocity at the core of a track like “The Defiant Ones,” Elektragaaz pulls no punches & spares no quarter, mercilessly immersing themselves in the craft in pursuit of something new, something unique, something attention grabbing.  Mission accomplished as far as my ears are concerned…I’d be willing to bet yours too as well…this hyperactive instrumental slice of pure energy hits the mark all-around in terms of their execution & creating music that’s as fully enticing as it is engaging.

The second slice I’ve got here, “Situation On Avenue B” is a straight-up trip to listen to, no doubt about it.  Elektragaaz gets all kind of clever with pace & their use of space throughout this tune, and manages to incorporate one heck of a stellar range in their sound selection as they play it.  They sure seem to have no problems at all generating vast amounts of entertainment, and they’re quite willing to dole it out in epic proportions from the lefts to the rights, as the pulsing percussive beat on “Situation On Avenue B” will confirm as the gospel truth.  Keep in mind, I was born for the synthetically-strange – that’s always up my alley – from Aphex Twin to Venetian Snares, I’ve been there riding the wave of the craziest audible creations to be found on this floating rock we share, and loving every minute of it, all the way out to the more fringe elements of similar sounds generated in bands like Tortoise & Peace Orchestra through more traditional instrumentation.  Elektragaaz fits right in with my zany personal taste; I recognize there’s a niche element to what they’re rocking, sure – but at the same time, when the execution and passion is as at such a consistently high level as you hear this band play…the value in that alone should be more than enough to pull listeners into their world of sound.  Like…for real…listen to a track like “Situation On Avenue B” and how remarkably & proudly anti-typical it truly is…yet I bet you can’t stop listening, can you?  That’s the real effect of uniqueness in action to the nth degree – we might not even all know exactly WHAT we’re listening to, but our ears demand we continue the journey when it comes to genuinely interesting music like you’ll hear this crew create.  I dig the way the beginning of “Situaton On Avenue B” instantly starts to bend space & time around you as it begins…it’s kind of like reading a story with an unreliable narrator (my favorite kind!)…you immediately sense the unpredictable nature of what surrounds you, and you’re on edge as you try to figure out where it all might be going.  What makes this track even more interesting, is the fact that, it really does sound like a cohesive chunk of time…like, as in…it feels like “Situation On Avenue B” is actually fairly rooted in its main vibe, which I think is still fair to say it IS…BUT…when you listen to the layers shifting, moving, morphing, and warping their way through the many twists & turns added in underneath the surface of this song…it should pretty much drop your jaws in amazement at how much color & detail has been laced so precisely into every moment.  They’re gonna be outside of the mainstream for sure of course, but make no mistake, bands like this can go on to have just as much longevity as any out there, if not even more-so based on the endless well of creativity & skill they draw from.  They’re proudly doin’ their own thing & making the music they truly wanna make…at the end of the day, you can’t put a price tag on that kind of passion.

Tags: Elektragaaz Singles Situation On Avenue B sleepingbagstudios The Defiant Ones