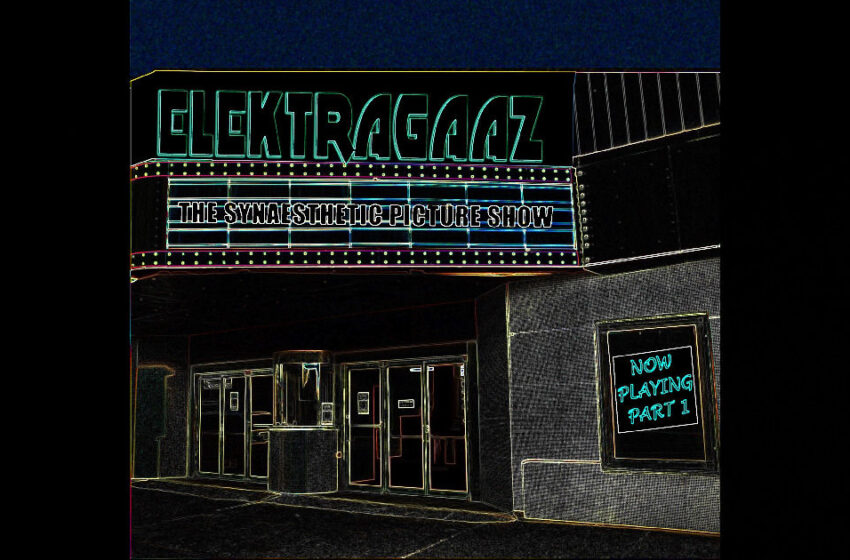 Well now!  You’re not gonna hear stuff like this every day now are ya?

Now what if I told you that was largely because the dude at the center of Elektragaaz, a nineteen year-old Frisian composer going by the name of Redband can actually SEE the music you’re hearing?  Pretty amazing right?  Believe it – it’s right there in-print on Elektragaaz’s pages online – Redband has the gift of what we know as synesthesia, which is a sensory phenomenon that allows him to see what we hear.  I’ve certainly read about this ability…this truly extraordinary insight into a world of music that most of us will never know…many times throughout the years – be assured, I’m nothing but envious.  I spend hours here at the studio thinking about how I can possibly get MORE out of the music I’m listening to, as if there’s another delivery system to get it into my face-holes…but I can’t even imagine for a solitary second just how awesome this world would truly look if I could see the music happening around me.

For real – Redband has discovered what I fully believe is a superpower – and he’s putting it to great use.  From what I can gather in the information I can find online – which, mind you, is shrouded in a fairly high degree of mystery to keep this whole story fluid, evolving, and in-flux as it progresses – it sounds like young Reband has assembled himself an army of talented players via both the internet and around the New York City metropolitan area.  Other than that, very little is known definitively, aside from the fact that they’ve got themselves a killer debut EP stocked absolutely full of innovative instrumental tunes called The Synaesthetic Picture Show.  I’ve got a couple slices from that record here to discuss with ya in review, but rest assured, like all music that genuinely interests me, I’ve had a complete peek into the full six tracks that are on it, and can absolutely guarantee that if you dig on these two tunes, you’ll love the rest of what you’ll find there as well.  Like I said from the get-go here, there’s uniqueness in this band that is unlike any other – that’s right folks, TRUE uniqueness – and it’s gonna carry them a long way.

The first cut I listened to was the first track in the official lineup of The Synaesthetic Picture Show EP, called “Cabin Fever.”  Unlike synesthesia, “Cabin Fever” is a condition that I’m sure just about ALL of you out there can relate to after this past year we’ve all experienced – so bring on the new anthem for it I say!  My initial reaction to this first impression was that it sounded like a band I love, 800 Cherries, but like…on some serious steroids.  Once the rest of the music began to fill in, and the tremendously skilled musicianship you’ll find here revealed its energy & depth, it had me thinking more along the lines of something closer to the Trans-Siberian Orchestra…but even that still wouldn’t quite cover it all 100% by comparison.  The added electro intensity you’ll find here, complemented by such an array of colorful sound in the mix consistently led Elektragaaz into unique territory it could proudly claim completely as its own, straight-up dazzling us with stunningly vibrant sound from the lefts to the rights as “Cabin Fever” plays on.  To say it’s wild would be an incredible understatement – this song is built entirely with brilliant texture & tone radiating from every pore of your speakers, and holds absolutely nothing back when it comes to the performance you’ll find.  From the sheer brilliance of the violin, to the grittiness of the guitar, the insatiable bass-line grooves continuously makin’ the magic happen, and the electro atmosphere keeping the energy pumpin’ out strong for a straight 2:47 in length – “Cabin Fever” never relents, and never quits flexing a diverse palette of ideas that can’t help but catch the attention of anyone within earshot.  From the skill on display to the outstanding selection of sound itself – this is as memorable as a first impression can be – and as I mentioned, you’ll find the innovation in Elektragaaz continues solidly throughout the full duration of The Synaesthetic Picture Show EP.  You’ll hear wild stuff happening on any cut, I guarantee it – from the more subtle chill of a track like “Phil Gumms Progress” to the ambitious & adventurous six-plus minutes of “The Magic Knapsack,” which plays directly before the final track “Dancing With The Queen Of Hearts” for its spectacular finale – Elektragaaz has stocked & loaded this record with every reason to listen.

If I had to compare the two…which I don’t, but I will, since I’m here talkin’ tunes…I’m probably more partial to “Dancing With The Queen Of Hearts” personally, because melody & sincerity are pretty much always the keys to my heart.  Right behind that, you’ll find imagination & innovation…equally important in so many ways, I’m just saying a sweetened & subtle melody is always going to be what charms me first when I listen to music.  “Dancing With The Queen Of Hearts” is so perfectly equipped with everything I’m looking for in the tunes I listen to – there’s just absolutely no possible way you could ever get bored with the amazing amount of twists & turns a song like this takes from start to finish, and how much impeccable precision and professional musicianship you get along with it.  You combine that with the fact that the absolutely gorgeous melody-line that runs through “Dancing With The Queen Of Hearts” is strong enough to take your breath away & take a true moment to marvel at this masterful composition – and I mean, c’mon now folks…it really doesn’t take a rocket scientist to understand Elektragaaz is onto something remarkably special here.  Listen to the cleverness around spots like the 1:20-1:25 mark where the timing will shift for just a moment or two with such decisive purpose…it’s not the kind of thing anyone would mistake for an accident, that’s completely ingenious structuring & songwriting at work, and played with the passion & precision you wanna hear in what you listen to.  And while I’ll concede that one solitary moment is hardly the defining point of this song – it IS one of many moments that you’ll find where Elektragaaz turns left instead of right in unpredictable ways, which is invaluable when it comes to the effect in the results.  We’re listening intently, because they’ve simply left us no other choice than to be completely interested in what we hear & totally engaged with the gripping sincerity at the core of the melody they’ve so masterfully played together on “Dancing With The Queen Of Hearts.”

I mean…look…I don’t even know if I can fully explain just what we’ve found here in Elektragaaz – I just know what special IS when I hear it, and this is certainly that.  As far as my ears can tell, this band has the potential and capability to wow us all over and over and over again with the level of imagination and pure heart you’ll hear in the music they’re making – there really is no telling just how far they could go.  What’s absolutely certain is they are bound to make a strong connection with a great many of you out there listening…especially those of you looking for MORE in the music you put on your playlists – there’s an endless well of creativity being drawn from here that already sounds completely spectacular, and I would absolutely bet on Elektragaaz to go on from here to blow our minds even further in the future.

Find out more about Elektragaaz at the official Facebook page here:  https://www.facebook.com/ElektronicBuzz