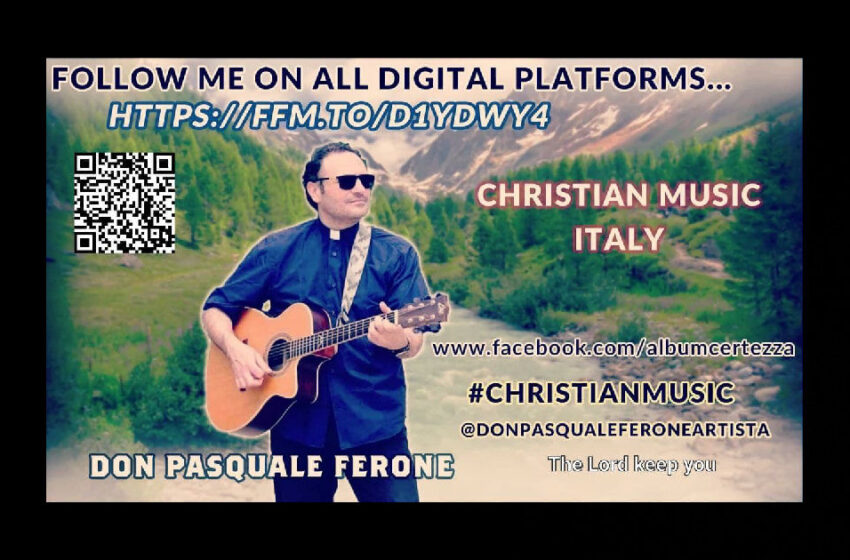 From what I’ve read and what I’ve learned about Italian Christian Contemporary artist Don Pasquale Ferone, he’s pretty much always had a connection to music – but he has had quite the different path towards being a musician than most stories you’ll find.  Like many of you out there, he learned how to play an instrument at an early age by picking up the guitar – but where Don’s pathway quite probably differs from yours, is in the fact that instead of a direct line to music from there, he becomes a priest first!  That’s right folks – by 1998, Don Pasquale Ferone was a full-on priest – it wasn’t actually until 2017, nearly two decades later, that he circled back to his love of making music & started putting out his tunes online, which began with a humble eight-song set on his debut album called Certezza.  From there, Don has continued to thrive ever since, releasing an impressive four EPs and fifteen singles after his initial debut – year after year, he’s steadily put new music out there into this world that we all share.

If you click on that promo video above, you’ll find a short sample of Don Pasquale Ferone’s song called “Fedeltà,” which comes from the EP of the same name, released in August of this year.  Clearly making a push to get his music out there around the world online, the sample video clip will take you on a tour through the heart of the city streets, and show Don’s poster proudly posted up on the side of just about every building you’ll see.  It’s smart stuff dear readers, dear friends – a lot of you out there reading this & watching that video promo could certainly benefit from putting the extra time into your careers like the good pastor here is doing – by the time you’ve finished watching, you’ll essentially have all of his website addresses & social media pages fully memorized!  It’s always an immense pleasure to have a listen to music being made from so far away from us & our Canadian-based pages on the internet – Don’s got a good thing goin’ over there in Italy, clearly loves making music, and he’s obviously stoked to have found another avenue to be able to spread the joy of his religion to others with his songs online.

Not only am I impressed with the fact that he’s taken the time to put together a quick promo clip to help assist in generating the buzz behind his music – it’s genuinely showing in the results you see as well.  At his page at Spotify, you can see people are tuning into his songs from all over the world, tens-upon-tens of thousands from what I can tell…and I’d imagine all that amazing support from you all out there has gotta make a guy like Don feel like the entire journey has been worthwhile, and pretty darn good inside.

He also so happens to be one of the most organized artists I’ve ever had the privilege of checking into – take a look at this incredible list of his pages online to find out more & you’ll know exactly what I mean – find out more about Don Pasquale Ferone at his official websites & stream his music from this multi-link:  https://ffm.to/d1ydwy4