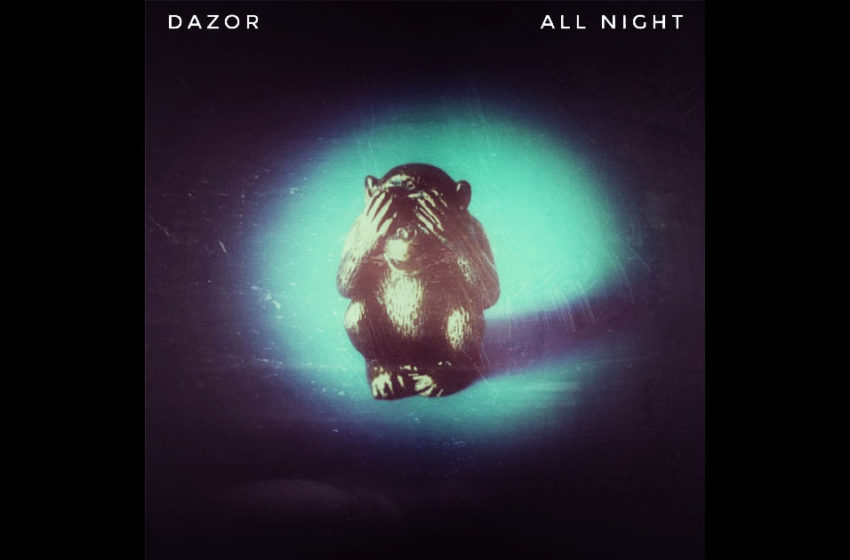 I can only hope that you guys aren’t sleepin’ on Dazor…I’ve ranted, I’ve raved, I’m screamed, I’ve shouted…they were even nominated in our top-ten list at the end of 2017 for the all-out wicked cuts on their Back To The Lounge EP…but perhaps until I turn my lungs inside out talking about these guys & wear the fingerprints off of each of these fingers typing about’em, I’ve got more work to do.  I mean, at least until the rest of the world finally catches on…which…I mean good lord, that’s gotta be soon right?

Dazor is after all, one of the best & most exciting bands in Canada right now, full-stop.

I’ve got no reason to lie to ya, no reason to lie to them, and no need to rub anyone’s nuts – I’m just tellin’ ya the facts – Dazor is explosively awesome and they do the Alt-Rock sound better than 99.9% of those out there rocking anything remotely similar, straight up.  These three fucking Grunge-inspired warriors from Halifax, Nova Scotia – Ian Panter, Lewis Belcher, and Andrew MacMillan, should have all the confidence in the world that they could travel this globe and make a career outta this music thang.

Because I’ll tell ya this…I’m long sold on Dazor’s sound & capabilities as a band, like I said & no joke – they’re one of the best that Canada has to offer right now in the entire scene, pick any genre you like – BUT…as I’ve said a few times on these pages, it can be nice to know you’re not crazy.  Confirmation always comes through those subsequent releases and later on in a career – like the old adage goes, you ‘got a lifetime to make your first record and two weeks to make your second’ – personally I don’t need anyone to come back before they’re ready to, I want them to come back as strong as Dazor is right now.  I didn’t NEED the confirmation that these guys kick ALL of the ass (not just some!) – I’m just happy to have it – their new single “All Night” scorches with fantastic fuzzy sound and big-time alternative energy.

Fuckin’ FLAWLESS boys!  The chorus of “All Night” is HUGE – and it’s not like the verse was any small feat to begin with – Dazor’s rippin’ it up with really smart Alt-Riff-Rock here, making sure the music is just as fully loaded with hooks as their harmony-laden chorus is.  There are of course, numerous comparisons to be made to the Foo Fighters here…from the pulse, punch, and gripping bounce of the movement in the music, to the intensity & spotlight on the brilliant screams coming roaring through the mic, to the hard hitting drums & rhythm section keeping “All Night” movin’ & groovin’ while the vocals are howlin’ & growlin’ – but I mean, what more could you possibly WANT people?  This single ROCKS.  Dazor’s comparable to the Foos not just for the sound itself, but for the monstrously awesome level of precision inside of what’s essentially an entire genre of sounds & styles that tends to slack off too hard in that department.  It’s always gonna be cool to rip it up live, deconstruct things and thrash around – but the example the Foo Fighters have set is a serious blueprint to success for those that are really listening – they’re a tight fucking band, much tighter than most – and Dazor seems to really get that when it comes to their recordings, especially this new single.  Obviously I dig these guys, that’s a given – but like I said, I’ve got no reason to rub nuts – Dazor SOUNDS like they’re believing in their abilities now – the confident, supercharged energy of “All Night” certainly speaks on behalf of a band that is fully ready to kick the mainstream in the crotch and run away with its lunch money.  This is music that brings the party straight to the people where it belongs – I shit you not, test the theory out for yourself, crank this cut up on a summer day this year and see if your neighbors don’t start crawling out of their toolsheds to come have a beer with ya.  You’ll be lucky if you don’t end up having a full block party by the end – that’s the Dazor effect people, I’m tellin’ ya – this band has the ability to amp me up unlike almost any other out there, indie OR mainstream.  Ain’t a thing about “All Night” that isn’t completely single-worthy in every second you’ll listen to – and the amount of savage melody, gripping intensity, and non-stop entertainment should have you scouring the internet to find out when your next opportunity might be to see Dazor live.

Because I’m tellin’ ya dear readers, dear friends…it’s just a matter of time before these guys hop in the van and start roaming the continent, bringing their wicked Alt-Rock right to your door, no matter where you’re livin.’  Halifax, you know I love you – but you’re gonna have to part with Dazor at some point or at LEAST share them with the rest of the world for a while.  They’ve got all the right pieces of the puzzle in place and play like a seriously united band with zero weak points to be found anywhere at all from performance to production to songwriting…hell, I don’t even know how they do it, but they even find the perfect amount of FUZZ to add to their distortion…I mean, c’mon people – Dazor absolutely slays.

And not that they could possibly need any more praise from me, but I’m giving it to them ANYWAY – the psychedelically-inclined video they’ve got supporting “All Night” crushes damn near as hard as the song!  It’s perfectly suited for the entire vibe they’ve thrashed out & created on their latest single, wicked colors, clever layers, editing, effects & eye-catching movement & energy.  Mark my words people, mark my words – Dazor is strong enough to reignite a blazing resurgence of Alt-Rock one day…the moment the people out there wake up and catch on to these guys, they’re seriously gonna spread like wildfire.

Find out more about Dazor from their official page at:  https://www.dazormusic.com