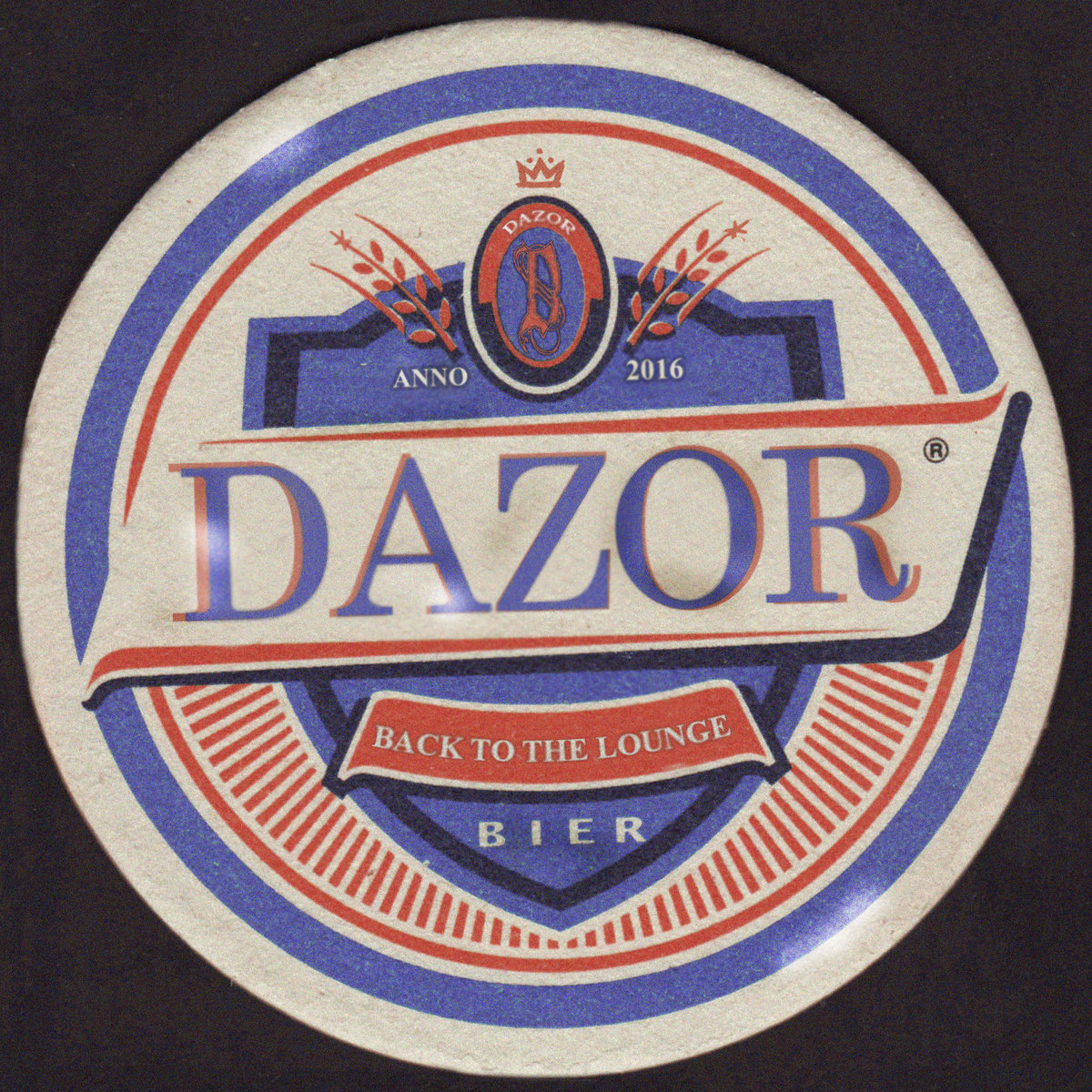 Dazor – Back To The Lounge – EP Review

Dazor – I love you guys!  This is damn-near indescribably Canadian in sound…but I’m going to give it a shot.  The opening cut on this tune has so much like…pfff…pure awesomeness?  Let’s just call it that.  Back To The Lounge sounds like a modern-day version of Canada’s Change Of Heart with the punch of Canada’s Rusty…bit of the fire of The Headstones perhaps…and then hell, let’s just toss a bit of south-of-the-border like…Grohl-esque songwriting sensibilities or the fun rip through rock like The Refreshments Fizzy Fuzzy, Big & Buzzy has and I’d say you’ve got something pretty close to what you can expect on this kickass & gripping EP.

The thing is…you’d likely have to be Canadian to even get the references and comparisons.  Bands like Change Of Heart and Rusty ruled our airwaves throughout the mid-90’s…but they didn’t ever quite bust out of the nation and into the rest of the world.  They should have mind you; much like many Canadian bands out there, they suffered that all-too-familiar fate that many of us that call this beautiful place home know about all-too-well – the very crime of being Canadian somehow equates to staying Canadian.  It’s tough to get the music across the borders, even though our music is comparable to what’s up in the USA every day of the week & twice on Sundays…it’s virtually ignored down south by comparison to how big these bands can become here up north.

Outside of the Canadian influence, you can definitely tell just how much of a factor that the Foo Fighters have played in influencing the music, writing and production of Back To The Lounge.  I’d challenge that there’s a good 3-out-of-4 songs on this EP that could damn near fit onto The Color And The Shape and no one would even question it.  But hey…I mean…first of all, game-recognize-game, the Foos are amazing – and if I’m calling out Dazor on hearing their obvious influence on their style & sound then it’s just as fair to point out once again that if it hadn’t been for Grohl & his crew recording Wasting Light in his garage using sleepingbags for soundproofing and winning a Grammy for being awesome in this rogue ways…well…I wouldn’t exist right now either, would I?  And BESIDES that…The Color And The Shape is probably one of my favorite records of ALL TIME…it was so gritty, so raw, so electric, so REAL.  You get the idea, I’m sure you can imagine how pumped I am about Dazor and their new Back To The Lounge EP, yes?  Clear as grunge?  Perfect…mix that in with huge punched-up, raging, pop-inspired hooks, enormous energy and powerful performances & we’re on the same page here – let’s continue.

I’ll tell you this much, Dazor definitely went to the Grohl school of rock where the theory taught was to write a chorus, use that as your verse, then go back and write a bigger chorus – this is a band that has an intense understanding of what WORKS.  Every one of these songs on their new EP has gigantic hooks and serious pull – not a second ticked by that I didn’t want to listen to over and over again.  Mind you…I’m obviously a product of that same Generation-X influence of music and this is completely my thing; but I maintain that this is that good-good alternative post-grunge sound that we ALL crave.  These four songs have enough passion, spark & energy to heat the room you’re currently occupying, if not the entire house throughout the cold winter months of the year.

It begins with the title-track…which damn well could be my favorite of the bunch.  Anyone out there looking to understand how to start-up an experience and leave a lasting impression has GOT to hear the insanity in the energy of “Back To The Lounge.”  Quite simply – this opening tune slays a massive set of hooks in the verse and somehow cranks the intensity through the roof when it comes to the chorus.  This is the way to do it!  The incredible attitude in the music from all the guitars, drums and bass involved is exactly what your ears are craving…and those vocals…THOSE VOCALS from lead-singer Ian Panter have the perfect amount of rasp, growl and tone to match the energy in this barn-burner 100% of the way through.  Credit where credit is due though – this whole three-piece is kicking ass right from the puck drop, Lewis Belcher is riotously pounding away in the drums, Andrew MacMillan keeps the bass grinding away with the guitars, adding all the thickness & depth the track needs to balance out that sweet, sweet distortion.  Not a damn thing I’d change here…this is the exact energy I want to hear in a rock-record in that first immediate impression – these guys sound hungry enough to eat an island and monstrously huge on “Back To The Lounge” – this is how to get’er done!

“The Right Side” ends up revealing a bit more of their pop-inclinations when it comes to the writing and hooks…still delivered as ferociously and frantically as the first cut was.  Decent job on the verse & lead-up to the chorus…plenty to listen to here still…but…BUT…as IF “The Right Side” doesn’t prove what an exceptional chorus this band can write!  The explosive way they tackle the main hooks of this second tune are all-out ROCK in every sense of the definition.  I’ve been a massive fan of Ian’s vocals from the moment they first kicked in on the title-cut and they continue to excel & supercharge the atmosphere of Dazor’s music to the next-level through a seriously inspired and gripping performance in the chorus of “The Right Side.”  You might even notice…you savvy listeners you…that Dazor is also making time for the instrumentation in these tunes as well…the solos included are short but badass & highly effective.  They make the most of that two-thirty to four-thirty range in the length of their songs with the way they structure these tunes for highly explosive entertainment and leave nothing behind when it comes time to perform and record.  “The Right Side” has all the right things working for it melodically, solid musicianship and serious focus – that transition into the chorus of this song absolutely just sells it every time – Ian’s vocals could decimate an entire village on this tune.

I have no problems with “Dear Sandy” either…I’ll fully admit, I probably like the three surrounding songs better personally…BUT…I mean, c’mon…those are three amazing songs and “Dear Sandy” really ain’t that far off the mark in comparison.  This third cut likely boasts what’s perhaps the most accessible hooks for all listeners out there…so what do I know anyway?  “Dear Sandy” relies more heavily on pop-inclinations than the other three tunes do; catchy it most assuredly IS…I’d never deny that.  Probably my favorite solo from Panter on the record…love the way that Dazor attacks the comeback to the end from just past that solo point as well…the hooks are tight…like I’m saying, there’s really nothing to actually complain about on any valid level – I just happened to like the other three songs a bit more.  I have no doubt at all that “Dear Sandy” could just as likely be people’s major favorite from this EP for exactly the opposite reasons that I have to love those other three tunes that 10% more.

But here’s what I’m ultimately saying…Dazor is rock done RIGHT…they do pop-alternative really well too – but LISTEN to that gritty rasp from Panter and you’ll hear instantly that he’s got a voice born to rock.  The final cut of the EP, “Back To The Start” accomplishes what the title implies one way or the other.  Either you’ll want to go “Back To The Start” and repeat this song immediately once it’s over, or you’ll want to go “Back To The Start” and listen to the entire EP from beginning to end all over again.  In other words – this tune is another seriously rad cut from this record and another wild chorus that highlights the gripping sound & style of Dazor’s approach, structure, writing and performance.  Production on this particular cut sounds like it struggles a bit in comparison to the other three – but no issues here that would ever make you want to turn this down…everything about “Back To The Start” screams TURN THIS UP…it’s just a bit dustier in the mix compared to the other tunes before it is all.  Idea-wise, this is ‘the tits’ as they say…its designed to glide you through smooth alternative filtered-hooks in the verse and ready to detonate in the wild extremities of the chorus – it’s a fireworks display of an ending and a song sure to leave the lasting impression on listeners that these guys deserve to make.

You can consider me a huge fan of this Canadian crew – Dazor absolutely rocked these four cuts and made a wall-to-wall solid EP full of material that’s going to last in these speakers far beyond this summer.  As much as it’s always fun to have ourselves another great Canadian band we love – this three-piece from Halifax, Nova Scotia needs to find themselves out there and into the world, rocking stages from their hometown to the other side of the globe.  Intense, raw & real music like this shouldn’t stay a secret or localized to any one region when they can be rocking the entire planet – with great rock comes great responsibility, and I hope they get out there on tour to bring this straight to the people and the mosh pits where this music belongs.  Really, really kickass stuff – Dazor crushed, killed and pillaged the entire length of the Back To The Lounge EP – I definitely recommend checking these guys out.

Find out more from their official website at:  https://www.dazormusic.com/

Tags: Back To The Lounge Dazor EP sleepingbagstudios