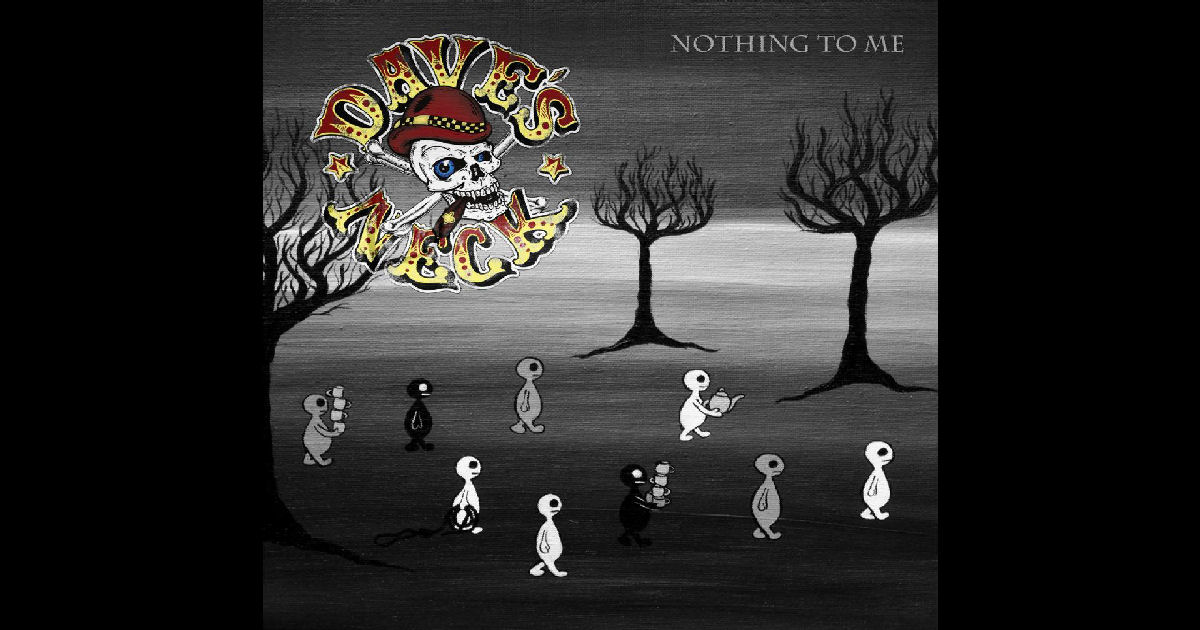 Dave’s Neck – “Nothing To Me” – Single Review

Monstrous new single from the Swedish dirt-rockers known as Dave’s Neck called “Nothing To Me” that hits the internet officially TODAY my friends…and if you’ve been wondering what they’ve been up to since the release of their last record The Girl With The Neck Tattoo – you’re about to get your answer.

Things have changed enough to certainly be noticeable.  I was digging what I’d heard from the band on the single we’d reviewed from their last record called “Knock Knock Idiot” – but many of the comparisons that I made were to bands like Seaweed and Mighty Mighty Bosstones…which…while still solid bands, also perhaps reflected that mix of light-hearted fun alongside a more punk attitude overall.  I’d don’t want to accuse Dave’s Neck of heading into a more serious and focused direction for their style, sound, music and career, or that they’re starting to take this whole possibility of a lifetime that could be spent making music all-day every-day as REAL…but that’s kind of exactly what’s happened here on “Nothing To Me,” hasn’t it?  It’s a bold move and shift in sound that might just pay off for these guys.

As to specifically WHY it’ll probably the new Dave’s Neck single is going to strike a solid connection with the people out there, I’ve actually got a pretty damn specific theory on that.  You know those Foo Fighters songs and Them Crooked Vultures songs that are like…well they’re all good pretty much…but you know those wild instrumental parts their songs often contain where they take the energy up that extra 10% from the unbelievable level it was already at?  Or if you’ve ever been to a serious rock show live in concert where the grand-finale damn near takes the roof off the place as the band storms and pounds until the very last second?  Yeah – this entire SONG is like that.

LISTEN to that intensity as “Nothing To Me” opens up with an impeccably RAD guitar-riff from Henke, quickly joined by the rhythm section and vocals shortly after.  Ultimately, through the writing and approach to the verse, the three-piece band heads into harder terrain than you’d usually find Them Crooked Vultures or the Foo’s in, which is going to work for a lot of people looking for a similar kind of catchy sound that has more aggression to it like a band like Baroness has.  The growl and relentless rasp of lead-singer Stiiv also helps distance the band from being too much like any one thing that’s already out there by really switching-up his own game and transitioning through a multitude of different approaches to the mic.  There’s smoothness to the verse before he storms into its hardest parts with serious authority, there’s insanely awesome, gnarly energy in the chorus of “Nothing To Me” that’s sure to amp-up listeners to that wild level of satisfaction they’re looking for and craving.  With the clever pacing and stunning execution they’ve collectively put into this performance – they’ve moved much closer to a dedicated hard-rock/alt-metal style that’s a massive testament to this band’s adaptability and creativity.  They’re keeping drummer Kapten as busy as it gets back there – but the man nails every hit.

Honestly, I think it’s a gripping track that completely connects.  It’s got a wickedly insightful structure and sound that really satisfies those looking for hooks and those looking for the hard-stuff; with additional crossover potential, those that don’t know they’re in-store for both might just find an entirely new facet of music they really enjoy through the accessible hardness that Dave’s Neck has created with “Nothing To Me.”  And that’s always an awesome part about listening to music…it can be a gateway to a whole bunch more of something you didn’t even know you loved yet…it’s songs like this that can be a bridge for listeners and connect them to a whole genre or style they might not have considered before.  Of course, that being said…it’s not as if you’ll just get lucky enough to go and find another Dave’s Neck right off the bat, that’s much more rare, to be entirely clear about what you can expect when you go digging for the gold out there in the music-scene.  They’re clearly getting better, tighter, leaner and meaner – Dave’s Neck sounds right at home in the throes of the beastly energy that you’ll find on “Nothing To Me.”  Much respect to the band, much respect to producer Joe Vegna – the work they’ve all put in to shift the sound of Dave’s Neck is more than commendable, noticeable and still a logical, organic progression of where you might have imagined this band to head to next after their last record…and as a result, this doesn’t sound contrived – it sounds REAL, like they’ve found that perfect gear to lock into and drive this whole beastly machine to whatever village they want to conquer next.

Stoked to hear how the new record comes out for Dave’s Neck and I’ve certainly got no complaints about this first single…I think they’ve made really impressive moves in shaping their sound for “Nothing To Me” in a way that’s going to really turn heads and capture the attention they deserve.  Freakin’ BRILLIANT ending to this song too…the entire sound like, MELTS after the amount of scorching intensity they’ve applied to every second along the way…Dave’s Neck is invested right into this one and I think it’s something you can really hear in the furious unity of sound they create on “Nothing To Me.”

The new album from Dave’s Neck, called One, is due out officially at the beginning of the new year on January 1st, 2018…just another reason to celebrate and look forward to the future as far as I’m concerned.

Tags: Dave's Neck Nothing To Me Singles sleepingbagstudios