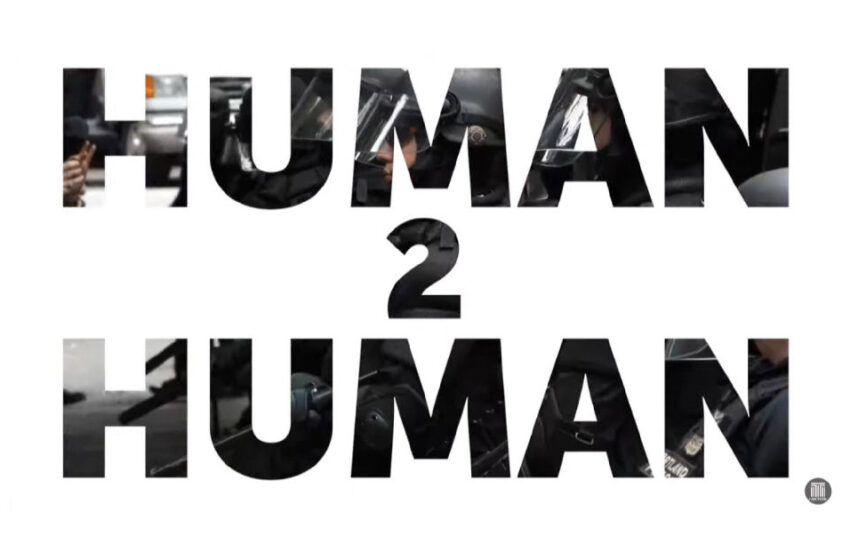 I can only imagine when artist Damien Q got word that legendary producer Stuart Epps was interested in lending a hand on a remix of his single “Human To Human” that he must have been absolutely ecstatic.  For real…think about it…it’s one thing to be able to collaborate with such incredible talent in the modern age to begin with, but it’s also extremely complimentary to have a song recognized in this same regard, you dig?  Epps ain’t gonna waste his time on material that ain’t worth it – he worked on freakin’ Zeppelin’s Coda – he’s a man made of music, and a gifted hybrid of artist/producer that clearly knows how to get the best out of a song.  If his multiple credits out there in the world don’t already confirm & prove that to be true – this remix of “Human To Human” absolutely will.  Ain’t no doubt that Damien Q was already onto something powerful with the original version…but he’s gotta be extremely stoked on the life this song has taken on now beyond that.  This Stuart Epps produced remix brings serious punch to the sound that’ll get noticed – & perhaps even more importantly beyond that, he’s brought even more clarity to the lyrics on this cut.

Shiny…flashy…catchy…bold…damn, it’s even JAZZY at points now…and it sounds SPECTACULAR.  I’ve always been a huge fan of the idea that songs can lead multiple lives successfully, and this remix proves that theory is both correct, and should be encouraged!  Art is so entirely capable of inspiring art – the way one insightful talent like Damien Q hears or structures something is gonna be way different from the next artist out there, or in this particular case, Stuart’s own inclinations & instincts.  No one needs to go down the whole original-vs.-remix debate…that’s long been settled now in the court of public opinion, and the genuine verdict of the people shows they want MORE of what they love whenever they can get it, however they can get it.  So for existing fans of the song like myself to hear how “Human To Human” has continued to grow, live on, and find a whole new avenue of success & sound…I mean…this is the kind of stuff that makes you proud to be living in the creative realm & witnessing art truly thrive on multiple levels.  Armed with its powerful lyricism and stunning video communicating the messages at the core of this cut – Damien Q’s “Human To Human” is a massive hit that’s right on target by any measure or angle you observe it from.  Quite honestly, I’m in awe…I love the low-end’s bounce & rumble in the rhythm section so expertly supplied by drummer Zac Sanders & bassist Carmelo Luggeri, who incidentally also takes on the extremely badass guitar solo you’ll hear soaring into the middle of this version of “Human To Human” as well.  Complete with the atmospheric vibes provided by Epps, and the stellar backing vocals via Juliet Rose’s perfect performance – you’ve got all the right pieces in place for this song to spring to life all over again, and offer something fully fresh & revitalized in the process.

What I love about the work of Epps in his mix & production here above all things, is that it shows how genuinely humble & respectful he is as an artist himself.  So many secondary cooks in the kitchen tend to add so much seasoning of their own that the original recipe can get entirely lost along the way – and Epps shows he’s the consummate professional with how much respect he shows Damien Q’s song here.  As incredible as all the extra, shiny, and new elements of “Human To Human” are – it’s actually the vocals that come out the most impressive overall…the extra spark & clarity that Stuart has brought to Q’s words has not only completely respected the original’s vision, but enhanced its chances of making the impact it deserved from day one immensely.  With everything that’s been added to the mix here, Damien could have easily become second-fiddle under someone else’s watch…and sure, in some circumstances, that can be cool too – but it’s hearing how insightfully well produced, balanced, rich, and full both the music and vocals of “Human To Human” have become, that really makes you appreciate what a legend like Epps can bring to a project.  Damien Q remains the star of the show…and you know, if I’m being absolutely fair, I think Stuart’s actually given the mix more of an opportunity for him to shine than the original even might have…he might just be more of the star now than ever before on this remix as a result of the way it’s now assembled & produced.  If I was Damien…I’d be taking a good look at WHY that is…and understand that, again, a talent like Epps isn’t gonna waste his time on something that’s not worth it for him…he clearly believed in the material & the man that made it – and his remix speaks strongly on behalf of that from start to finish.  I’d be extremely hard pressed to not admit that I think I’m in love with this version even that much more than the original, which I was already digging on without question…BUT…a good tune is a good tune – and when you know you’ve got one, you know.  Stuart Epps knew what he was getting into here for sure…he chose to back solid songwriting & an artist making music that deserved the extra attention & a little bit of legendary audio-lovin’ – and man did he bring his A-game to every second of Damien Q’s “Human To Human.”

Listen to more music from Damien Q at his page on Spotify here:  https://open.spotify.com/artist/7g9Vaj4bdBRc5YrYuWKfV6